GETTING TO KNOW TEENAGE HEAVYWEIGHT SENSATION DANIEL DUBOIS: “I LOVE BASHING PEOPLE UP!” 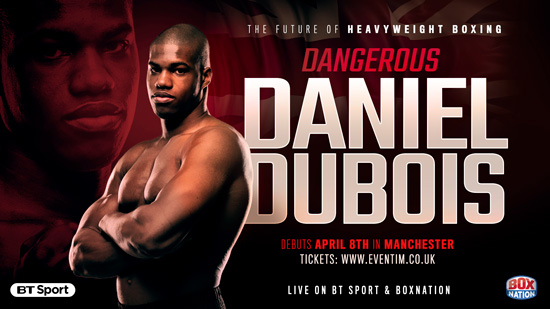 Expect the pending arrival of teenage terror Daniel Dubois to invoke some involuntary bowel movements among the continent’s heavyweight pretenders.

A five time national junior titlist and reigning British amateur champ, the 6ft 5in, 17 ½ stone south Londoner is rumoured to have given Anthony Joshua headaches – both figuratively and literally – in the gymnasium and is primed to leave a trial of prostrate bodies as he blazes through the sport’s showcase division over the next couple of seasons.

Ahead of his eagerly awaited bow at Manchester Arena on April 8th, the humble, jovial 19 year old spoke with Glynn Evans about his life, career and ambitions.

The internet and social media are awash with tattle about your spars with IBF Heavyweight champion Anthony Joshua. What’s the lowdown?!

I was only eighteen when I sparred AJ but I enjoyed some successes up in Sheffield. Given he’d been Olympic champion, that gave me a bit more confidence.

That said, he’s the best I’ve shared a ring with. I’ve sparred ‘Josh’ before most of his recent fights. He’s just a massive man, very strong, so I really needed my wits about me. He’s got a very solid jab, good defence and you certainly wouldn’t want to catch a clean right hand off him. In my view, he’s definitely the best in Britain, number one in the world!

Who else have you worked with in the gym?

When I was only 17, I sparred Dereck Chisora who’s very tough and a good guy. I also sparred (2016 Olympic finalist) Joe Joyce and Frazer Clarke regularly and did well, held my own.

Recently I went to Brighton to work with (10-0 pro) Nick Webb and Scott Welch’s son. They all try to help me out and they all try to bash me up! Still, I’ll give it a go against anyone. These are experienced pros but I’ve never been troubled.

I’d love the opportunity to spar David Haye, a very good fighter. My dad has promised to take me over to the Mayweather Gym to spar later in the year.

You were born in Paddington but raised on the mean streets of south London. Did you have a difficult childhood?

I spend a lot of time at my mum’s flat in Chelsea but I was brought up in Greenwich where my dad is from. He’s a Millwall supporter, mum’s Chelsea!

My dad has fathered 11 children and I’m the eldest from his second wife. Those south London streets were quite rough but, though I could be a bit moody, I didn’t get into a lot of trouble. I still haven’t got a criminal record.  I didn’t see much of the street because, from about the age of eight, dad kept me in the boxing ring.
I got a few GCSEs but, if I’m honest, I never really enjoyed school as I always saw it as a distraction from my boxing.

How did you first become involved in boxing?

Dad used to go to The Peacock Gym in Canning Town just to keep fit and I’d just toddle along to watch. It started from there. As a kid, I took part in a lot of sports. I weren’t that interested in football, still aren’t, but I sprinted for South London Harriers, where I also did the long jump and threw the javelin.

I just seemed to take to boxing quite quickly. Shortly after, we moved to the Repton gym, then to Dale Youth – where I won most of my junior titles under a fabulous coach called Gary McInnes. Later I passed through the Lynn and the Fisher clubs before finishing up at Islington. We changed gyms so often because the coaches didn’t seem to get along with my dad!

What did you accomplish in the amateurs?

All told, I think I had 75 amateur bouts and I lost about six. I won two English schoolboy titles, two junior ABAs plus the CYPs. Last December (2016), I won the British Seniors, live on BoxNation. I spent a year and a half as part of the GB Elite set-up in Sheffield and lived up there from Monday to Thursday. I probably boxed for England about a dozen times, competing at the European Youth championships twice and winning gold medals at multi-nations in Tammer (Finland) and Brandenburg (Germany).

Given your youth, why not hang around in the Team GB set-up and aim for next year’s Commonwealth Games in Brisbane, the European and World Amateur Championships, the WSB or the 2020 Tokyo Olympics?

There was no guarantee the (national) selectors were going to put me in any of those competitions. Though Joe Joyce is heavily rumoured to be turning pro, they were clearly grooming Frazer Clarke to take over. He’s currently number four in the world I believe and had been at Sheffield a lot longer than me. That’s why I opted to learn the game in the pros instead.

I’m sure you had plenty of suitors. Why did you select Martin Bowers to coach you in the pros?

I’ve been around Martin for a long time, at least ten years. I trust him and he’s a good motivator. That said, I’ve always believed that the fighter makes the trainer rather than the other way around. I train with Martin during the day at the Peacock Monday to Friday, then do a couple of hours on my own at another gym in the evenings. Most days, I’ll run around Greenwich Park a couple of times and my ‘old man’ takes care of all my strength and conditioning.

What qualities will you bring from the amateurs and what will you need to change and adapt to succeed in the pros?

I’m a forward fighter with a lovely jab. I’m quite aggressive and try to use a lot of head movement. I’ve not always been a heavyweight. At 12, I was 54kilos (8 ½ stone) and at 16, I was still just 75 (just under 12 stone). But once I developed into a heavyweight two years ago, I started blowing most opponents away; big right hands and body shots. Ask AJ and the others if I can punch!

Now I’m in the pros, I’m going to have to concentrate more and place my shots better. I’ll need to be even more aggressive. Look at (unbeaten WBC heavyweight champion) Deontay Wilder. He doesn’t hang about!

How to you relax away from boxing?

I don’t! When I’m home I just watch heavyweight boxing 24/7; Ali, Bowe, Holyfield….
I really like Lennox Lewis because he was so strong and skilful and (Mike) Tyson because he loved knocking people out. I try to pick good things up from all of them. You could say I’m a student of boxing.

Your team have made noises about your potential to become Britain’s youngest ever world heavyweight champion  – Herbie Hide was 22 years, six months, 23 days -but what are your short term goals over the next 12-18 months?

I’d like to get at least six fights a year – as Frank (Warren) has promised me – and I’d like the right fights, a mixture of domestic opposition and imports so that I can move up in rounds and class. I want to bash ‘em all up, 100%. I love bashing people up!

I intend to win every title I can; Southern Area, English, British, Commonwealth, Inter-Continental, the sooner the better. I’ll give anything a go.