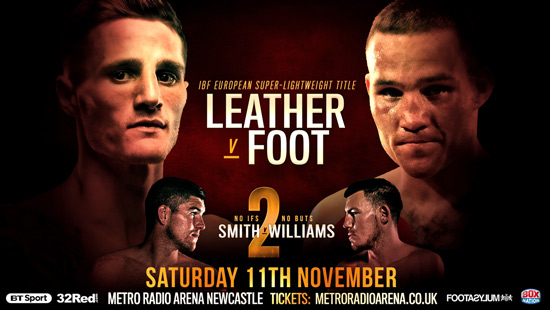 Guisborough’s gifted Leather, a former ABA champion, in unbeaten in a dozen as a pro with the final five all flattened inside schedule. Nevertheless, the 30 year old Foot is less than impressed.

‘So Josh is unbeaten but who has he boxed?’ asks the Wearside warlord who has won 21 of 23 (six quick) and already scalped seven unbeaten men in the pros.

‘I‘ve watched him and definitely don’t regard him as a top prospect. He does most things correct but he’s just a basic straight puncher. He’s easily beat(en).

‘There’s no way the Phil Sutcliffe fight should’ve been stopped. Leather got lucky there (rsc6) and, besides, there’s no way Phil and his team would’ve agreed to fight me. Look at how many unbeaten kids I’ve faced in my career. I’ve never dodged anyone.

‘Josh is IBF European champion but only till November 11th. He better enjoy his belt while he’s still got it. This is a 12 round fight and he’s still never been past round six!

The Tees-Wearside derby dust-up takes place on the banks of the Tyne but mighty Mackem Foot expects to be warmly received by the Geordie fight faithful.

‘Josh is from Middlesbrough way and there’s rivalry between our towns in the football but I think the fans will just view us as two north-east fighters,’ says the former Prizefighter and English champion.

‘Whenever I’ve boxed in Newcastle before, I’ve always received a great reception. The fans expect you to put on a show and I’m gonna give ‘em one, guaranteed. I’ve always had a good fan base and I’ve already sold about 250 tickets.’

The contrasting styles should mesh to provide a boxer-fighter classic for the fans and the feisty Foot predicts that his natural aggression and greater seasoning will ultimately prove the decisive factors.

‘I’m gonna put on a real exciting performance for the BT Sport and BoxNation viewers,’ he promises.

‘At the age of 30, I simply can’t afford to lose this fight. This is an opportunity to get me back up to where I should be.

‘Leather’s bragging that he’s gonna stop me in eight rounds with body shots. I’d love him to try. (Ex British and European welter king) Sam Eggington could dig but he couldn’t stop us.  Believe me, you couldn’t stop me if you were armed with a mell hammer!

‘But if Leather wants to be a man, stand toe to toe with us and put a show on for all these fabulous fans, good luck to him. Nah, he’s gonna run like a thief.

‘Clearly, his team thinks I’m done and dusted. He’s in for the biggest shock of his life. I win because I’ve got more skill, more heart, a bigger shot and I’m tougher and more determined.’