Golovkin wades on with Saunders waiting in the wings

Probably the burning question to emerge from BoxNation’s broadcast of Gennady Golovkin making short work of Dominic Wade in the early hours of Sunday morning is just who possesses the tools to stem the rise of a man who is seemingly destined for greatness? 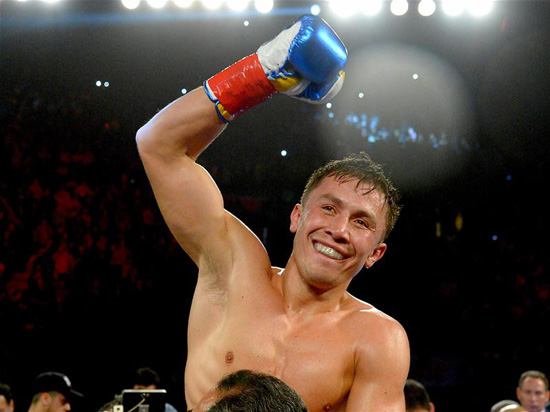 Wade always appeared to be a long-shot in that respect. Yes, he was unbeaten, but also largely untested and, if he wasn’t a IBF nominated mandatory challenger, it is doubtful whether Golovkin would’ve chosen to share a ring with him.

Credit to Golovkin, he wants the big fights, he has a strong desire to unify the division and place himself amongst the greats of the sport. He is well on the way to doing just that, with only the WBC and WBO belts missing from his middleweight collection.

So who are the Likely Lads when it comes to toppling Triple-G? WBC champion Saul ‘Canelo’ Alvarez is top of his wish-list for a pay-per-view spectacular in front of his adoring adopted nation.

But Canelo will first have his work cut out in fending off the speedy hands of Amir Khan in what is a genuine super fight that will be exclusively screened by BoxNation on May 7. That is one not to be missed and I am delighted we are bringing to our subscribers.

If Khan upsets the odds, as more and more pundits are suspecting he will, a return is already booked in, which will leave Golovkin in the WBC waiting room.

Which brings us to the WBO and its champion Billy Joe Saunders. I can tell you that Bill is up for the job and wants us to get it on.

It is not only about the payday with Bill, he fancies the fight and strongly believes he has what it takes to dethrone the Kazak king. He has got a solid chin, as well as underrated boxing skills with the ability to unpick and punch through the tightest of defences.

Bill is also elusive and he would need to be against Golovkin who, on current form, is a monster in the ring. Bill is desperate for the opportunity to slay the beast and, if anyone can, I believe he is the man.
He has told us to go ahead, so we are waiting very keenly for the outcome on May 7 and see where the WBC go with Canelo and Golovkin if it happens – and we’re ready to go.

I accept that Golovkin would be favourite with his record of 35-0 with 32 KOs, but Bill is also the business as far as I’m concerned and, at the moment, the next best one out there – and I include Canelo in that.
Bill thrives on the big occasions, being cast in the role of underdog, but he would step in the ring utterly convinced it would be his arm raised in triumph at the conclusion.

Martin Murray put in an admirable performance against Golovkin, going 11 rounds in a showing which has gathered increased appreciation since, with only David Lemieux’s defences holding out until round eight.
Murray is game and has got a good chin, but as an all-round fighter is not a patch on Bill, who I feel is the complete package.

Whether he is one that can be unwrapped by Golovkin remains to be seen.