Gorman fights for the vacant title on November 11th as part of the sizzling Liam Smith v Liam Williams 2 card in Newcastle, live on BT Sport and BoxNation.

“We both want that English title badly and I’m predicting fireworks on the night,” said the 21-year-old. “He’s 11-0 with nine knockouts, I’m 10-0 with eight knockouts.

“We’re both big men with knockout power in both hands. At the end of the day what Heavyweight can’t punch? You can’t blink in this fight.

“There’s a lot of padded records in boxing these days. Nobody wants to risk anything but I’m in this sport to take risks and win titles. I want to be mixing it with the top fighters in the Heavyweight division in two years, winning the English title is the next step on my journey.”

The Chesire Heavyweight also explained what it’s like to train under Ricky Hatton. “He’s one of the lads. The knowledge I get off him is second to none. Every day is a laugh with Ricky, it makes the training seems easier, we train incredibly hard don’t get me wrong!” 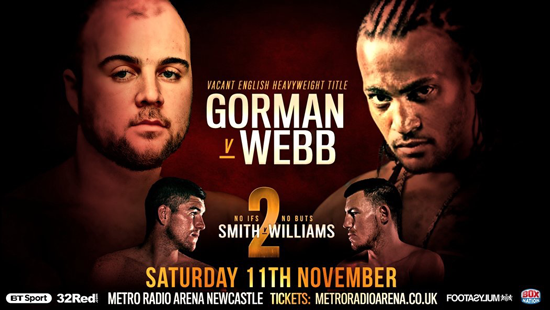 Explosive Super-Middleweight Mark Heffron (Oldham, 16-0) another of Ricky Hatton’s excellent young stable of fighters, will also be in action on the card; undefeated Jeff Saunders (11-0) of Sedgefield takes on undefeated Liverpudlian Steven Lewis (14-0)