Gosh Josh! Now Warrington and Fury must beware of those banana skins 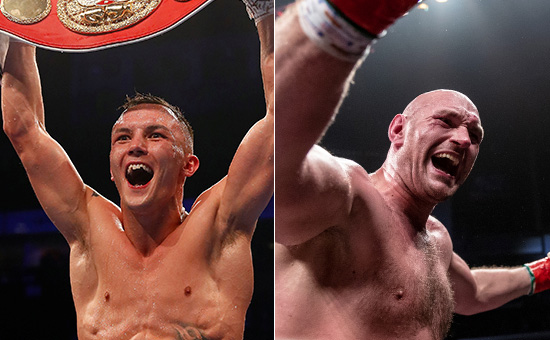 Bananas are the favourite fruit of most sports folk. Andy Murray munches his way through half a dozen or more every match while boxers Josh Warrington and Tyson Fury, now preparing to top their respective BT-televised bills in Leeds and Las Vegas on Saturday week, also like to consume several fingers of Fyffes after every training session . But they should take great care where they throw the skins.

As the saying goes, here’s many a slip… but both of Queensberry’s unbeaten crowd-pleasers will be treading especially warily after watching last weekend’s seismic shock at Madison Square Garden where that other Joshua – heavyweight Anthony – suffered such an ignominious upset against the Teletubby-like but deceptively skilled Andy Ruiz jnr.

It was the latest in boxing’s tales of the unexpected. And by an alarming coincidence the most significant since Fury’s own namesake, Iron Mike was left scrambling for his gumshield on the floor in Tokyo by the equally rotund Buster Douglas19 years ago.

Both are strong favourites; the dashing, bashing Warrington to make a second successful defence of his IBF featherweight title and heavyweight Fury to put on another razzle-dazzle show against Germany’s similarly unbeaten but somewhat less recognisable Tom Schwartz as he edges closer to a rematch with WBC champion Deontay Wilder.

What both Ruiz and Mike Tyson did gives hope to no hopers and adds fresh spice to the respective contests.

In boxing you never know what might happen. Just ask AJ, though I always had a hunch that he was an accident waiting to happen.

The consensus among the fight fraternity was that sooner or later the fallibility of his frail defence would be exposed. It is just that no-one expected to occur against a bloke who looked like Humpty Dumpty.

However it was not Humpty Dumpty who fell off the wall, it was the multi-belted world heavyweight champion from Watford. Now boxing’s burning question is whether the massive entourage which surrounds him can put the deposed king together again…Don’t bet your house on it.

We may have seen the best – and now the worst – of Joshua, just as we did his fellow British Olympic hero Amir Khan a few weeks back. Both

have had their careers at best rudely interrupted not just by a defeat but an apparent disinclination to fight back when hurt and humiliated.

Like many others I have suspected that one day the golden boy of London 2012 would run up against someone who hits him back harder that he hits them. It also happened that midriff-bulging the Californian of Mexican heritage not only had more rapid firepower but more bottle. A harsh indictment I know but as a bewildered, broken Joshua heaved himself off the floor for the fourth time in the seventh round at Madison Square Garden, turning his back on the referee, then lolling back open-mouthed on the ropes in his own corner and spitting out his gumshield – the way a boxer often indicates he has had enough and wants out – you could see surrender written all over his face.

Same manner Khan was obviously disinclined to continue after being accidentally hit low by Terence Crawford and spurning the offer off a statutory five minutes respite. So much for going out on your shield.

Big Josh was not only floored, but flawed and just like most of us he had grossly underestimated the quality of the Sumo-shaped challenger whose record always suggested he was better than he looked. Beaten only once in 34 contests -– and that on a split decision in another world title bout – he may have had a big belly and slow feet, but by golly he had a huge heart, getting up from a first-ever knock-down, and deceptively fast hands.

At the conclusion of the scrap Joshua had lost not only his four world titles but also seemed to have lost his marbles. His corner was as nonplussed as he was about what was happening, offering little in the way of way of constructive advice as to how to combat the carnage.

Yet what surprised me most was the nonchalance 29-year-of Joshua showed in defeat. Arms draped around his joyously celebrating opponent’s shoulders he heaped praise on him while smiling and joking with the man who is the first of Mexican descent to hold the World Heavyweight Championship.

Joshua seemed relaxed, even relieved. Where was the disconsolation of defeat, the anger with himself, the swallowing of a bitter pill? His carefree attitude does not bode well for the contracted return in the United Kingdom this autumn.

My own gut feeling is that that a rematch could be a repeat of the original for psychologically Joshua has been harmed more than any of the physical hurt inflicted by Andres Ponce Ruiz jnr, aka “The Destroyer”.

Some will insist that he has simply been found out. Personally, I think the problem lies way from the ring. He has assembled a veritable platoon of

camp followers, at the last count some 23 in all, managers, minders, publicists, advisers, coaches, conditioners, confidantes and assorted acolytes. More even than Donald Trump..

Equally important is that he still largely trains at the lottery-funded Team GB national HQ at the English Institute of Sport in Sheffield under the tutelage of his old amateur coach, Robert McCracken, who also has a whole bunch of Olympic wannabes to supervise. Moreover, he is already a multi-millionaire several times over, typically trousering some £20 million ($25 million/€22.5 million) for what should have been a walk in Central Park.

Okay, so it is true that some of the great heavyweight champions from Joe Louis and Muhammad Ali through to Lennox Lewis and Tyson Fury via Mike Tyson and Wladimir Klitschko have had to pick themselves off the floor but the difference is that all have done so with annoyance and avowed retribution their eyes. I did not see that from AJ. His were not the eyes of a tiger.

“He looked liie a shot fighter,” was the private condemnation iof one British former world champion while Gennady Golovkin, who has his own banana skin to avoid when he faces Canada’s 35-year-old Steve Rolls,unbeaten but relatively unheard of at The Garden this Saturday night, dismissively declared that Joshua “is more interested in being a superstar than a boxer.”

If AJ’s career and reputation is to be resurrected he needs to be swiftly ejected from his current comfort zone.

Up close he is charming but you can rarely get to him these days. We in The Boxing Writers’ Club have been trying for over two years to honour him with a lunch, as we do all UK world champions, but his over-protective, snooty management team keep fobbing us off. Wonder if he’ll be ready for us now

Alan Hubbard is a sports columnist for the Independent on Sunday and a former sports editor of The Observer. He has covered a total of 16 Summer and Winter Games, 10 Commonwealth Games, several football World Cups and world title fights from Atlanta to Zaire.