Hawke Eye? How soon before boxing brings in Cut Eye? 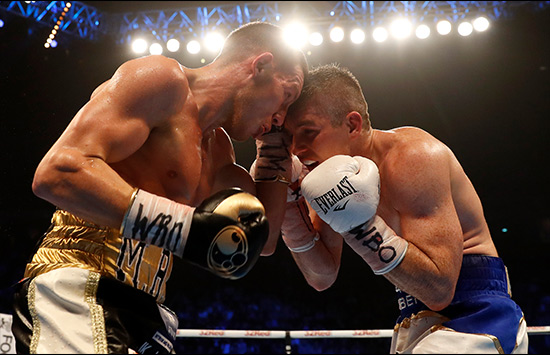 By rights – not to mention a few well-schooled lefts – Liam Williams should be admiring the WBO interim super-welterweight belt resting in his trophy cabinet back home in the Welsh Valleys today, rather than an empty shelf.

I am not alone in believing that the deeply gashed eyelid which caused the untimely ending of his recent humdinger of a contest with Liam Smith in Manchester was caused by a head butt, accidental or otherwise.

The pair clashed heads in the ninth, opening up a horror wound for Williams on the eyelid which forced his cornerman Gary Lockett to call it off.

I have watched the replay several times and the conclusion is always the same.

It is that veteran referee Terry O’Connor, who apparently did not see the incident, still erred in not immediately summoning the ringside doctor to examine the awful injury.

Had he done so surely Williams would have been declared the winner against an over-weight ’Beefy’ as he was ahead on the scorecards of all the judges. Mine too- and by more than the single point the adjudicators all made it..

I make the point, so to speak, because the situation has caused a debate to break out as to whether boxing, like all other major sports, should now employ video technology to help resolve such controversies.

A post-fight editorial in Boxing News raises the question and I think it is one that needs further airing.

“Perhaps it is time for common sense to prevail in situations like this,” says BN. ”A quick look at the replay would have highlighted what caused Williams to stumble back nto the ropes an blood to cascade all over him.

“Today the officials who actually have the responsibility over the outcome do not have the benefit of mulltiple views like almost everyone else has.”

Indeed, the Board’s progressive general secretary Robert Smith, while, insisting that the referee acted correctly according to the rules, accepts the possibility that such instant technology could be brought in eventually and is being discussed by the Board. But he warns that taking full control away from the referee “could ultimately lead to more confusion than closure.”

It is a view with which Hall of Fame promoter Frank Warren concurs. “We just have to accept that referees make mistakes but that their decision has to be final,” he argues.

He adds: ”If it is down to the fighters and their trainers, they would take advantage of it to help them recover when hurt and it would disrupt the flow of the fight.

“There is only a minute between rounds for trainers to work on their fighters, so that is not enough time to go through the video for the officials at ringside either.

“But what I am in favour of is looking at video replays after fights to make sure that, if mistakes were made, rematches happen, as it will in the case of Smith and Williams”.

His is a traditional and rational argument.

But I do wonder if in the course of time boxing – both amateur and professional – will have to find a way to go down the route of video technology, just as other sports have done as they evolve.

Most employ Hawk-Eye, a complex computer system used iinitially by cricket commentators to analyse umpires’ decisions, but its technology is now being used in football, tennis, snooker and even hurling, revolutionising sports officiating, coaching and broadcasting.

It has also been accepted by governing bodies in tennis, cricket football and rugby as a technological means of adjudication, and reviewing in-play controversies.

The system was rolled out for the 2013-14 Premier League season as a means of goal-line technology – as to whether or not the ball has crossed the line.

This officiating replay system (ORS) makes it possible to give a definitive answer in cases where it’s difficult to determine what happened with the naked eye or even a standard video recording.

There is no doubt it could be easily adapted to boxing to assess how serious eye injuries are inflicted and also to determine whether or not a blow was actually low.

So I can’t help wondering how long it will be before boxing has its own version of Hawk Eye.

If so, maybe they should call it Cut Eye.