Will the real heavyweight champion of the world please stand up!

At the moment you can perm any one from four. Take your pick. Is it Britain’s Tyson Fury, America’s Deontay Wilder or Charles Martin, or the well-seasoned warhorse from Uzbekistan, Ruslan Chagaev? 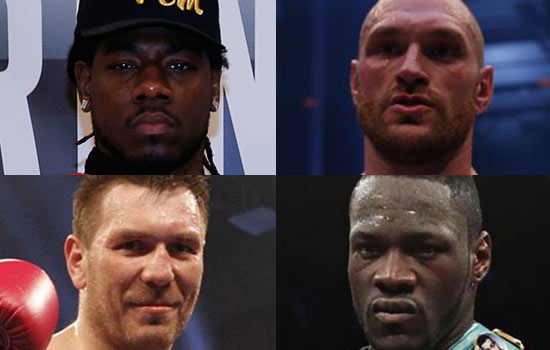 All lay claim to what used to be described as the richest prize in sport. Now it is simply one of the most fragmented.

Boxing’s splintered group are all due to be in action over the next few months – though not against each other – but when the dust has settled on their disparate ring disputes will we be any the wiser as to who is then real king if the heavyweight jungle?

There was rarely any argument when Joe Louis, Muhammad Ali, Joe Frazier, George Foreman, Larry Holmes, Mike Tyson and Lennox Lewis ruled their respective roosts. You knew who was the big cheese of the heavyweight division.

Then fragmentation set in. Even when the Klitschko brothers dominated you didn’t really know who was numero uno because they never fought each other.

And that’s the situation today, on that has been acerbated by the hasty decision of the IBF to strip Tyson Fury of their belt almost before he had an opportunity to wrap it around his waist.

This was because he opted for an immediate Spring return with Wladimir Klitschko when the IBF wanted him first to take a mandatory against their leading contender Vyacvheslav Glazkov.

But Fury said he’d rather do a Riddick Bowe and bin the belt.

So Glazkov was matched with the equally unheralded Charles Martin, who won almost by default when Glazkov injured his knee in the third.

The man from Missouri will now be defending against Anthony Joshua here in April, a tad premature for the Olympic champion in the view of many, but potentially a good fight nonetheless.

Fury still has possession of Klitschko’s WBA Super, WBO and IBO titles and is the linear champion; Deontay Wilder is the WBC champion and sticking his ladle into the alphabet soup is Uzbekistan’s Ruslan Chagaev, who is the WBA regular champion.

That may sound to some like something he’s picked up in a cardboard cup in Starbucks but it is a valid enough belt which he puts on the line against the flamboyant Aussie Lucas ‘Big Daddy’ Browne in Grozny, Chechnya on Saturday week – a bizarre boxing occasion from a war-torn capital where

they know all about fighting – that will be screened live exclusively by BoxNation.

Ricky Hatton’s unbeaten big-hitter from Down Under (19 stoppages in 22 wins) has the chance to make history as Australia has never had a world heavyweight champion.

It promises be a lively scrap. But wouldn’t it be wonderful if it could also be a prelude to mapping out some sort of unification process so that the public might once again recognise an undisputed world heavyweight champion.

Or is that just a pugilistic pipe dream?