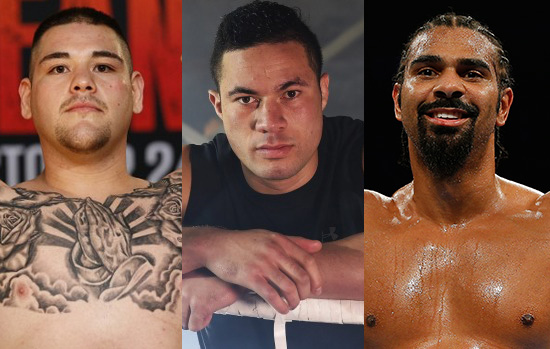 The jigsaw of the boxing giants is slowly piecing itself back together again in the wake of Tyson Fury temporarily abdicating his position as head of the heavyweight state.

Matches have been made and mooted across the globe in anticipation of the governing bodies making their declarations as to which ones will be afforded world championship status and, for the moment at least, it does look like we are reverting to having four kings of the ring in the top division.

The WBC have been able to sit back and watch all the intrigue unfold, with their champion, Deontay Wilder, currently in no position to trade leather due to injury, while the IBF have seen their mandatory challenger to Anthony Joshua divert to the WBO path.

At their convention in Puerto Rico this week, the WBO have ordered that Joseph Parker, formerly head of the queue for a shot at the IBF, take on Andy Ruiz for the vacant crown.

It is a logical conclusion for the WBO to reach in matching up the top two available contenders in the rankings and it is a tricky fight to call between two unbeaten and relatively young heavyweights.

This one looks like going ahead on December 10 in Auckland and it is a fight you will be able to view live and exclusive on BoxNation.

The winner won’t be able to sit and admire his belt for too long because, within 120 days, he will have to defend against David Haye, who also figured strongly – along with Hughie Fury – in the deliberations of the WBO.

So David, who on Monday will receive the prestigious Nordoff Robbins Boxing Icon Award in celebration of his career on our charity show at the Hilton Hotel on Park Lane, has got a massive night to prepare for in the early part of next year.

The WBO board also rightly decreed that should Tyson Fury return to the ring within a year, he will straight away become mandatory challenger for his recently vacated title.

I thought it a really worthwhile  convention and there was other good news for our fighters to emerge from Puerto Rico, with Zolani Tete and Jamie Conlan now both having final eliminators for world titles firmly on the horizon.

Meantime we still await news on the intentions of the WBA, with Wladimir Klitschko seemingly at the forefront of their thinking. It has been a right mess and at times it looked as if they didn’t know what they were doing after the legal challenge made by Lucas Browne in response to him being stripped of his regular title.

The WBA have been procrastinating but hopefully we should know very soon how it is going to pan out.

At the time of writing everyone has been left in the dark and nobody can get a word from them on what is happening on whether they would be sanctioning Joshua v Klitschko.

To be honest I do not believe either Big Josh or former champ Klitschko should be fighting eachother for Fury’s WBA belt.

Joshua as IBF champion is not in the WBA rankings. They should have been looking for someone in their list.

The Ukrainian got comprehensively beaten last year by Fury in Dusseldorf and he has not thrown a punch since.

Why should he get another chance just because Fury has had to vacate the title?

The only reason he is still in the picture is because his management got a rematch clause inserted in the contract when he fought Fury.

That clause should never have been there and who knows what the heavyweight landscape would look like if it wasn’t.

Klitschko is demanding a 75 per cent split of a purse if he fights someone other than Joshua for the vacant WBA title which is laughable too. He barely laid a glove on Fury.

But neither he nor Joshua should get a shot. As I say Joshua is the IBF champion and not ranked by them. There are decent ranked fighters waiting for their chance like Lucas Browne, Alexander Ustinov and David Haye.

THE OTHER BIG FIGHT IN VEGAS

They aptly billed the third televised the third  public debate between US presidential candidates Donald Trump and Hillary Clinton in Las Vegas as Fight Night.

And some of the verbal punches exchanged were worthy of quite a few scraps witnessed in the boxing citadel. So was an unscheduled one later – between octogenarian Hall of Fame promoters Bob Arum and Don King, who were both present.

Arum, who once worked as a lawyer for John F Kennedy, is an avowed Democrat while King, who supported Barak Obama last time round, has now perversely come out in support of fellow Don, Republican candidate Trump.

They were at the same restaurant afterwards and Bob told me in Puerto Rico that when King came across to say hello he (Arum) called him a ‘traitor’ and there  was one hell of a debate between them which surpassed anything hard from the two political protagonists earlier.

King went on the defensive, declaring that things had got to change in America. As Arum pointed out King himself has certainly changed his political stance, and with typical verbal gymnastics he now terms himself a ‘Republicrat.’

However they later shook hands – which is more than dodgy Donald and haughty Hillary are likely to following their own November 8 showdown.