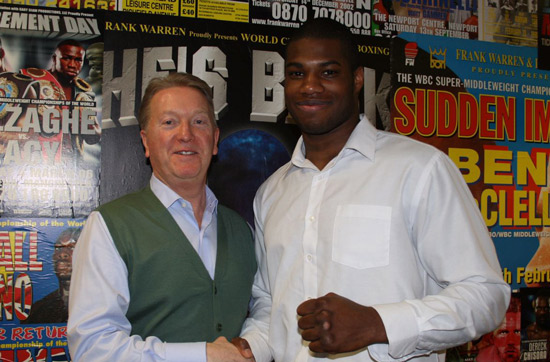 Promoter Frank Warren is delighted to announce the signing of highly-rated Heavyweight amateur standout Daniel Dubois on a long-term deal. Hall of Famer Warren is predicting big things for the latest amateur star to come off the Super-Heavyweight production line at GB Boxing’s headquarters in Sheffield.

Dubois was following in the footsteps of London 2012 gold medallist, Anthony Joshua, and Rio 2016 Super-Heavyweight silver medallist, Joe Joyce, as a Tokyo 2020 medallist hopeful but instead opted to chase his dream of becoming the youngest ever British-born Heavyweight World Champion.

The 6’4.5” powerhouse had previous spells at several highly-regarded London clubs, including the renowned Repton Boys Club, Lynn ABC and Dale Youth ABC before joining the Islington Boxing Club as a senior in 2015.

Dubois likens himself to a mixture of Lennox Lewis and Larry Holmes and cites Mike Tyson as one of his childhood heroes. He has boxing in his blood, his sister Caroline is an undefeated European Amateur Champion and his younger brother Prince is also making a name for himself in the Amateurs.

In December Dubois won his first his first senior domestic title at the GB Boxing Championships at the English Institute of Sport in Sheffield before deciding to pursue his World Title ambitions in the Professional ranks.

“If I know I can take someone out of there, I’m going to take him out,” said Dubois. “In the Heavyweight division, one shot can change the whole fight, so you have to take that chance if you want to be successful. It’s what the people want to see.”

“Frank is the best Promoter out there and I’m delighted to be starting my professional career with him. He has a reputation for developing the very best boxers in the country and I can’t wait to get started.

“I’m confident in my abilities and want to be knocking on the door for a World Title by 2020. Becoming the Heavyweight Champion of the World has been my dream ever since I started out in boxing and I’ll stop at nothing to achieve my goals.

“I have a brilliant team behind me and now it’s time for me to knuckle down and show people what I’m capable of. 2017 is all about keeping busy, staying in the gym and listening to the advice of those around me.”

Frank Warren said: “Daniel is one of the best, if not the best, young Heavyweight amateurs in the World today. I’m so pleased that he has decided to team up with us and I’m looking forward to him making his debut soon.

“Martin Bowers is an excellent trainer and I know he will be able to get the very best out of Daniel. He is a great prospect and has a brilliant opportunity to make a name for himself and join the likes of Joe Calzaghe, Naseem Hamed and Nigel Benn as a British boxing icon.”

“Naz didn’t go to the Olympics, Calzaghe didn’t go and neither did Ricky Hatton. Daniel can follow in their footsteps but we’ll need to show a bit of patience, he’s got a long and exciting journey ahead of him.

“There’s a big buzz around what he’s done in the gym, sparring with the likes of Anthony Joshua, Joe Joyce and Derick Chisora. I really do believe he is going places and we’re going to work together to ensure that happens.

“I can’t tell you how excited I am to have Daniel on board with us. It’s no secret that I like getting involved with guys at the start of their careers and helping with their development. In Daniel I think we have a very special talent on our hands. I think the fans are going to be in for a treat with him.”

Details about Daniel’s professional debut will be announced next week.