One of the world’s best young heavyweight prospects, Hughie Fury, will feature on Hall of Fame Promoter Frank Warren’s World Championship Boxing event at the Copper Box Arena on Saturday 30th April and after April he will feature and fight regularly for Warren. 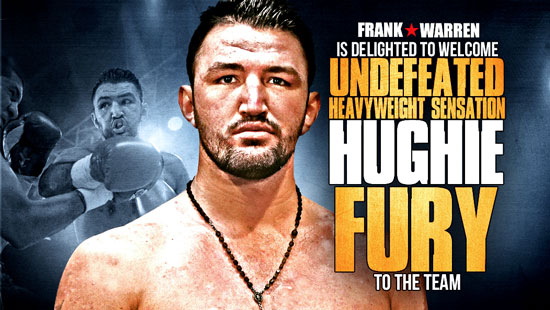 The exciting and undefeated Manchester star will have his first fight on the undercard of Billy Joe Saunders’ WBO World Middleweight title defence against “Mad” Max Bursak, exclusively live on BoxNation.

The 21-year-old, who is the younger cousin of Unified World Heavyweight Champion Tyson, has a fight lined up first at Wembley Arena against Nagy Aguilera where he aims to take his perfect record to 19-0 and then it’s full steam ahead as he works towards a world title and join Tyson.

With the heavyweight division in a new era after the Klitschko brothers long dominance, Fury is in a perfect position to capitalise as he also eyes showdowns against British rivals David Haye and Anthony Joshua, who he believes he has the beating of.

Fury has ripped through the division with his devastating, all-action, style that has seen him halt 10 out of 18 opponents early with eight coming inside three rounds and is looking to make a big impact at the Copper Box Arena.

“I’m delighted to be featuring on Boxnation I boxed on their shows in the past and really enjoyed the experience. I am going to make a big impact over the next few years and join my cousin Tyson at the very top of the sport. Thank you Boxnation and look forward to the 30th April and future fights.” Enthused Hughie.

Warren said, “Hughie is one of the best and most exciting young heavyweight prospects in the world and I’m thrilled to sign him. He wants to fight regularly and for a heavyweight talent of his potential that’s essential as he closes in on a world title. The division is certainly opening up with plenty of opportunities and Hughie is going to figure dominantly in the next few years.”

Hughie’s father Peter, who trains him alongside Tyson, said, “We’re delighted at Team Fury for Hughie Lewis Fury to be fighting on the Frank Warren and Boxnation show on the 30th April on the Billy Joe Saunders bill. We look forward to future fights with Boxnation with Hughie who is without doubt a future superstar in the sport.”