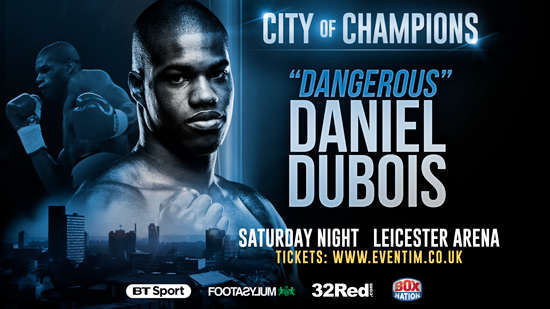 ‘Dangerous’ Dan will face Manchester-based Cameroonian Blaise Mendouo (3-1-0) over four rounds in his second outing as a professional, live on BT Sport and BoxNation.

It took Dubois just 35 seconds to blast out Cornwall’s Marcus Kelly in his highly-anticipated pro debut at the Manchester Arena earlier this month and now the Greenwich man is itching to get back under the lights to put in another big performance.

Mendouo, 32, made his professional debut against Istvan Orsos back in 2015 has racked up 18 rounds during his four outings. ‘The Lion’ went on to score points wins over Moses Matovu and Shane Kavanagh and has never been put down in his career.

“I can’t wait to get back in the ring,” said Dubois. “I loved the whole experience of my first professional fight and it is a feeling that I want to enjoy over and over again. In an ideal World Kelly would have put up more of a fight but I went in there and did what I had to do.

“He was game and came out swinging but as soon as he tasted one of my left hands it was game over for him. The tougher tests will come as I progress and Mendouo is another step up, he is another opponent with a winning record.

“Getting the win is my main priority but I’m also in this game to entertain. I’m going to put in another big performance on Saturday so make sure you grab a ticket or tune in on BT Sport and BoxNation!”

Remaining tickets priced £30 are available from www.ticketmaster.co.uk from 4.00pm today.