Here’s an offer for Crolla – half a million to fight Flanagan or Mathews!

Boxing in this country has rarely been in a healthier state with the roll call of home-grown world champions now in double figures after Tyson Fury impudently snatched the heavyweight crown from the bloodied and bemused head of Wladimir Klitschko.

And I’d love to think that my man Billy Joe Saunders – who really looking lean and mean in his training camp in Marbella – will make it a round dozen when he challenges Ireland’s Andy Lee for the WBO middleweight title in Manchester on December 19.

It is a fantastic record no other sport can match.

What’s more, it means there are plenty of good fights involving British boxers to be made in several divisions, perhaps none more so than at lightweight, where Crolla has just joined his Mancunian mate Flanagan as a world champion.

I like Crolla, he’s a nice young man and I am pleased to see that he has achieved his dream after what has been a horrendous year for him personally. 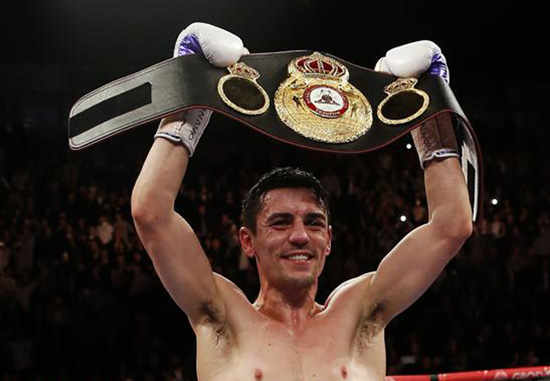 I also like what he said about boxing politics and the fact that this should not prevent a showdown with the Turbo. But now Liverpool’s Derry Mathews might have something to say about that on 13 February.

They meet in Liverpool in a mouth-watering domestic dust-up and what a terrific fight it would be if Crolla was to face the winner. It’s a logical outcome and possible if he is as good as his word.

I agree with what he said after his victory over Darleys Perez, that politics should be put aside. I’m happy to do this for my part even though his promoter has said in the past that none of his fighters would appear on BoxNation – yet some of mine have certainly appeared on Sky.

So, here’s an offer for ‘Million Dollar’ Crolla – £500,000. That’s what I’d give the new WBA champion to meet either Flanagan or Mathews, so think about it Anthony.

Kevin Mitchell, another British lightweight who failed in his last world title fight bid, declined to do so and instead now has another interim title contest against Ismael Barroso. Yet we offered Mitchell a fight with Flanagan for the world title, but he chose not to take it and instead fights for an interim title. Go figure?