After boxing, my second sporting passion is football – and in particular Arsenal, who I have supported since I was a kid.

I had intended to be in my regular spot for Sunday’s FA Cup quarter-final against Watford but, after journeying back down fogbound motorways from our show in Liverpool in the early hours, I was just too knackered and decided to give it a miss. 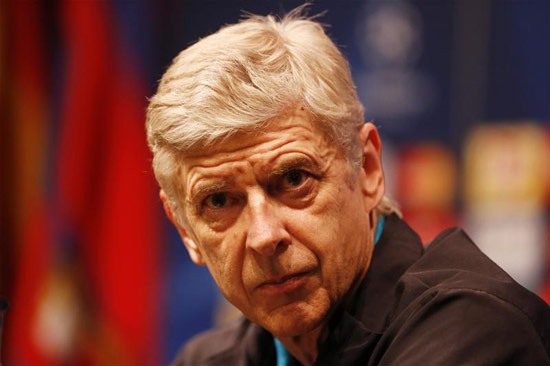 It turns out I was not a bad judge and had a bit of a result in sparing myself from yet more angst at the Emirates.

Some fighters can occasionally frustrate you with their inconsistent performances but, when it comes to football, Arsenal take the proverbial biscuit.

This was again supposed to be the season when Arsenal stepped up to the plate and served up a genuine title challenge. With the traditional heavyweights Manchester United, Liverpool, Chelsea and – to a lesser extent – Manchester City in various stages of transition, surely opportunity was knocking.

It appears the knock is being answered by Leicester City and, of all teams, Tottenham Hotspur…

I am very disappointed. If Arsenal were a boxer you would tell them to retire by now. Being 11 points adrift of the Foxes is lamentable at this stage of the campaign and us fans have to concede the hunt is over for another season.

Arsene Wenger did a fantastic job when he first came to Arsenal and changed the whole dynamic of English football, with fitness levels, tactics – the whole thing.

Other managers have now caught up though and moved on from there and we just don’t seem to do it. The once fabled youth policy seems to have gone by the wayside, the system of developing players to fit into the Arsenal framework – we’ve only got one real success story on that front in Jack Wilshere and he is injured most of the time.

Look at how they are playing, there is no solid leader in the side and the forward line has no world class striker. The defence is leaky, there is no consistency and we never know what team is going to show up. I think they have been pretty average, to put it kindly. We have won the FA Cup twice, but this is now a competition where many clubs tend to give their fringe players a run-out.

I don’t think this is where we should be heading for. To have the bar set at finishing in the top four is like telling a fighter to just win the British title!

Relying on the usual suspects to fall over I find unacceptable. We should be there on merit. We have £200m in the bank, the best stadium in the country, we are the most expensive team to watch – so what is going on?

I’m not saying Wenger couldn’t go to another club and do it all again because he has been magnificent over the years and in some ways I feel a little bit sorry for him.

But, if you are not going to do the business and ambition does not extend beyond finishing in the top four, then reduce the bloody ticket prices! Watching this lacklustre fare in a state-of-the-art stadium comes at a staggering cost to the average man.

You can’t have it all ways and this is not what we sign up for.

I know boxing tickets are expensive but, with what these guys are getting paid every week – on and off the pitch – you expect more than this.

I’ve been going to Highbury and then the Emirates since I was six or seven and have endured many a barren season, but this is a club that should now be consistently punching its weight among the elite.

Instead it is us fans who keep having to roll with the punches.