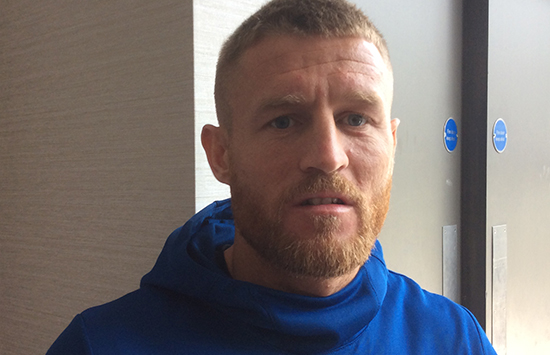 It was a case of bitter-sweet for Terry Flanagan when he discovered that his bid to become a two-weight world champion against Maurice Hooker was to be pushed back from its original April date. The upside was that his attempt at making history will take place in his home city of Manchester. Terry takes up the story in his latest exclusive Fighter Diary…

IT WAS A good and a bad thing for me when the big show scheduled for the 02 Arena in April got pushed back to June due to an injury to Billy Joe Saunders.

It was frustrating at the time because, just four weeks out, I was ready to go against Maurice Hooker in my shot at becoming world champion again. Just the other week I was saying ‘I could have been a two-weight world champion by now’.

It is what it is, it is done now and I quickly turned my mind to the new date of June 9 at the Manchester Arena where I top the bill alongside the return of Tyson Fury, which should be a special occasion.

Fighting in Manchester is always great, but at the time of the postponement I was ready to go and it wouldn’t have mattered where I was boxing – I just wanted to get in the ring and fight.

If they had offered me to fight on the same date but to go over to the States I would have gone over there rather than wait because I was firing in the gym and looking good.

I had to ease it off before entering into six hard weeks of sharpening up and working on things. We’ll get it right.

I didn’t switch off though and my weight never went above 11st and it has been easy – I was usually around that weight before making lightweight, so I will be able to perform that bit better this time around by moving up a division.

I won’t have to go through the torture of taking off that last bit of weight this time, although I haven’t done it yet so I don’t know for sure!

The last few weeks of trying to get down to lightweight, trying to remain at 10st1lbs was hard. I will be able to stick at around 10st7lbs before this fight and it will be a lot easier.

Before, the last weeks were all about making weight and not really thinking about the fight. Now I have been able to go to the gym, talk about the fight and do little bits – work little tricks and set little traps, stuff like that for the fight.

I will now know in my head what he is going to do and bring. We are prepared for everything he might do.

This is an opportunity for me to really build myself in Manchester again on the big shows. The ball was rolling after the Diego Magdaleno fight and, after another good performance or two in Manchester, people would have been right on me.

It panned out that I went to Liverpool and then Cardiff a couple of times.

This is the big stage now and a lot of people are going to be watching. It is up to me to put a show on.

I am happy to be headlining with Tyson because he is a big character. I’m not really one to shout this and that, so I will leave that side of it to him and focus on putting on a show that sees me become a two-weight world champ!