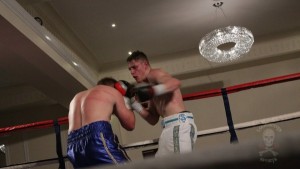 Red-hot Corby cruiserweight talent Simon Barclay made a successful return to his home town on Friday night and extended his unbeaten record.
Barclay headlined the sell-out show at the Best Western Hotel – the first professional boxing show in Corby for over 20 years – against Courtney Richards and gritted out 59-55 points win over his Plymouth rival.The 25-year-old stepped up a gear in his first six-rounder with an action-packed performance that saw the hometown hero overcome a hard third round in which he took some big shots – the only round he lost.

Now undefeated in six fights, the classy prospect will return to action shortly as he builds towards his first title fight.

Barclay said, “It was fantastic to return to my home town for the first time as a professional with a brilliant atmosphere and packed house.  It was the first pro boxing show in Corby in over 20 years and there was a big buzz in the town so we know there is a demand there for boxing shows,”

“Richards came to have a fight and we went at it at a crazy pace.  I was drawn into a fight with him early on and maybe I should have used my boxing brain, but I was hyped up in front of my home fans and looking to put on a great performance for them,”

“The third round was a bit rocky and I got caught with some shots for being careless, but I got through it and boxed the rest of the fight to get the win,”

“I’m still a good few fights away from my first title, but I’m on course for it and in the next few fights I’ll look to work my up from six, to eight, to ten rounds and prove that I’m ready.”