Indian boxing sensation Vijender Singh blew away Hungary’s Alexander Horvath at the Liverpool Echo Arena to claim his fourth successive professional victory. Singh continued his red-hot winning streak by stopping Horvath in the third round with a big body shot. 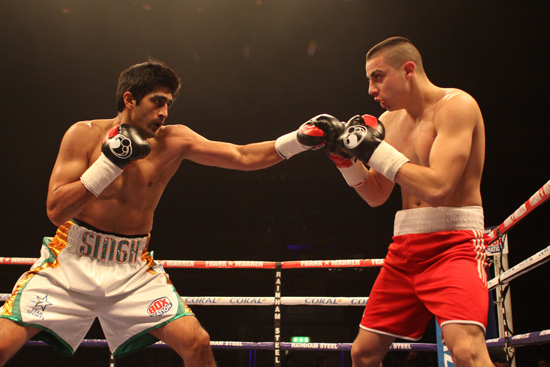 Undefeated Singh, delivered an explosive performance for the BoxNation viewers. The man from Kaluwas was well on top from the very first bell, landing some big right hand shots on the retreating Horvath. The Indian puncher started the second round with a flurry of big hooks that connected well on Horvath who struggled to handle Singh’s power and movement.

The contest was won in the third round with a powerful body shot that connected on Horvath’s shoulder. The Bulgarian went down and failed to beat the referee’s count. It looks to be a massive year knockout merchant Singh who was delighted to get yet another stoppage win.

“I’m thrilled to get my fourth professional victory and excited for what the future holds for me. I’m happy to get another knockout win and really want to push on from here with some big performances is 2016,”said Singh.

He added: “The support I have received from everyone here in Liverpool and back home in India has been absolutely phenomenal. My phone hasn’t stopped buzzing with messages of support from all around the world and I’m so grateful to all of my new fans. You can expect some big performances from me this year as I look to move up the ranks.”