Francis Warren of Queensberry Promotions and I.O.S Boxing Promotions are delighted to announce that India’s boxing sensation Vijender Singh will make his exciting and long-awaited professional debut on Saturday 10th October at the Manchester Arena, England.

To make the transition from the amateur code to the professionals, Singh has set up his UK training base for the fight in Manchester at the gym of top trainer Lee Beard, who trains current hot talents Jack Catterall and Adrian Gonzalez, as aims to make history and become India’s first ever world professional boxing champion.

All-action Singh’s first fight will be over four rounds in the middleweight division, against an opponent to be confirmed shortly.  Singh will be competing in one of the hottest weight classes in world boxing with elite fighters Gennady Golovkin, Miguel Cotto, Andy Lee and Billy Joe Saunders all campaigning at 160lbs and he aims to be in their position one day.

Singh can’t wait to get into the ring at the Manchester Arena and show the boxing world just what he can do and aims to make an immediate impression for the fans’ in attendance and the viewers watching on The Channel Of Champions BoxNation, who will televise the fight live, with a powerful performance.

“I’m so excited to be making my professional debut at the Manchester Arena on Saturday 10th October and to show that India is the new force in professional boxing.  Thanks to Francis and everybody at Queensberry Promotions for the very warm welcome and I can’t wait for my fight to be televised on BoxNation.  This means so much to me personally and to all my fans back home in India who have supported me all this way and will now follow me on my journey to become the first boxer in India to win a world professional title.  Training now as a professional is totally different to my amateur regime and I’m loving the training with Lee Beard who has taught me so much in a short space of time.  We are working great together and now I want to put into practice what I have learnt.  I’m still learning all the time and there will be plenty to come from me.  I believe that this is going to be a very exciting time.” Said Singh.

Francis Warren from Queensberry Promotions said, “We’ve all worked very hard to get Vijender here and I’m delighted that his professional debut is now confirmed.  The Manchester Arena show is a fantastic event for Vijender to make his debut on and it’s headlined with two big world title fights on BoxNation and one day that can be him.  I’ve seen how hard he is working with his trainer Lee in the gym and I can’t wait for him to produce the goods on the night to show what I and the team have believed all along, that he has the potential to be a world class boxer.”

Neerav Tomar, MD & CEO, I.O.S Boxing Promotions, said, “I am thrilled to see Vijender make his professional boxing debut here in Manchester. It has been an amazing journey for Vijender from Bhiwani to Manchester and I.O.S has been proud to have been a part of the same journey. Vijender has worked hard to reach this stage in his career and his share dedication and commitment to the sport will make him winner. Here in Manchester he has been training very hard and diligently and I am sure Vijender shall put up a great fight and win the debut fight to make all Indian’s back home feel happy and proud.” 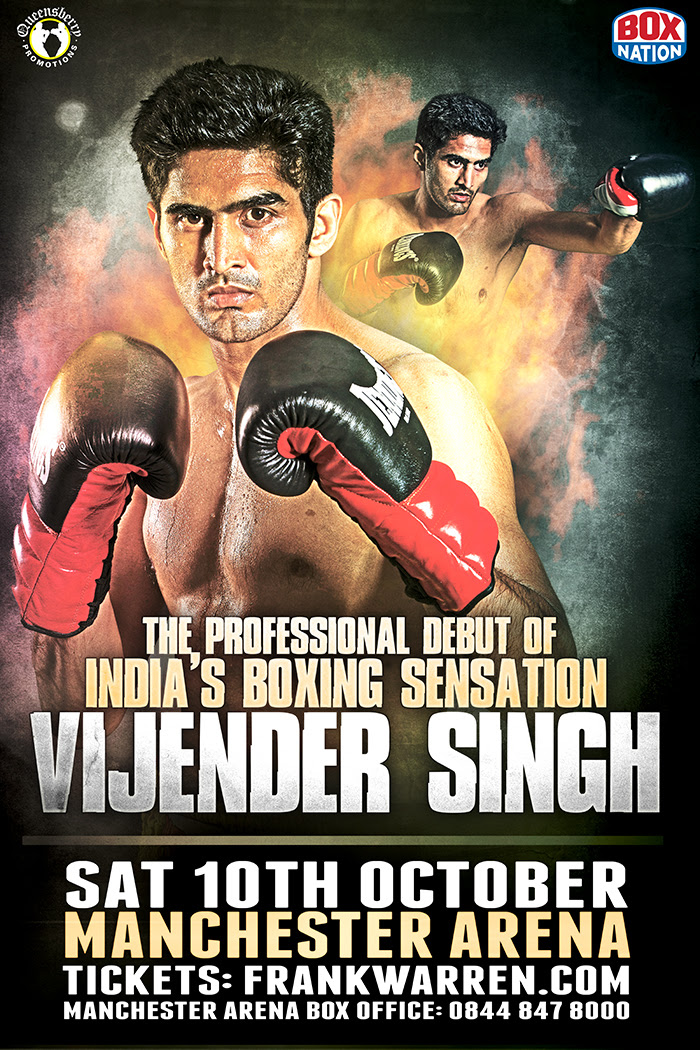