How Amir Khan Builds Bridges and Keeps the Faith

As a fighter, Amir Khan has never been short of bottle, which is what in boxing they call bravery. Now the former world champion and Olympic silver medallist is again demonstrating he also has both courage and class outside the ring too by becoming one of the few high profile Muslim sports personalities to put his head above the parapet and express his outrage at the shameful atrocities committed by the inhuman extremist zealots who defile his religion.

While Floyd Mayweather jnr, who snubbed him once again in favour of Andre Berto, was trousering more than $30 million for what supposedly was his last hurrah last weekend, Khan was himself in the collection business. 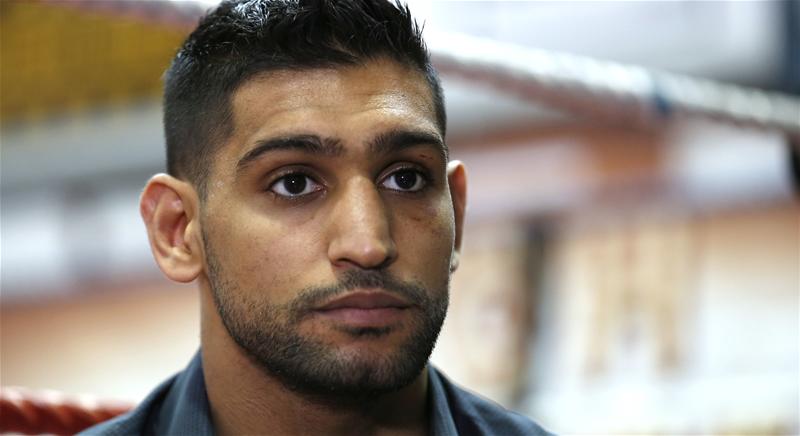 He was back home in Bolton helping to pack up an assortment of clothes, food and vital supplies which he personally will help deliver to Syrian refuges on the Greek island of Lesbos.

He is leading a convoy which leaves on Tuesday and says, “Syrian people are going through a lot of pain and they need our help. Every little bit is going to make a massive difference to these people who need out support.”

The convoy is a joint venture between the Amir Khan Foundation and charity PennyAppeal.

‘It’s heartbreaking to see images of children losing their lives as their families flee from devastating conflict,’ Khan said. “What’s even more disturbing is knowing that many more lives will be lost unless we provide urgent aid.

“We’re seeing stories of people in countries like Germany doing so much for refugees and I know people in the UK are just as generous and thoughtful.”

It is by no means the boxer’s first charitable gesture. He spent the New Year in Pakistan, the birthplace of his parents, to “send a statement” to the Taliban about his revulsion at their massacre of 132 schoolkids and several of their teachers in the North Western Province of Peshawar.

He realised his own life might be endangered but declared: “Talking about this stuff could be threatening for me but I must speak out and tell people that what is happening is wrong. They were innocent kids. I cannot believe how sick in the mind some people are. Have they got no brains? It has to stop.

“Some people don’t walk to talk about the Taliban or other extremist groups but I’m open. I want to speak the truth.”

Khan donated the 24 carat gold thread shorts, worth around £30,000 (which he wore when producing perhaps the most scintillating performance of his 34-fight career in defeating American welterweight Devon Alexander in Las Vegas) to help rebuild the army school so mercilessly desecrated by the Taliban. He was personally hand-on in the rebuilding process.

Last month he formally opened the Amir Khan Boxing Academy in Islamabad, personally funding coaches and equipment to develop the sport in Pakistan.

He says: “I hope by going to Pakistan it sends a statement that not all Muslims are terrorists, that we despise what is happing in the name of our religion and that things like this just set the country way back.”

As he says, he is rare among Muslim sports personalities who are prepared to do as Muhammad Ali did and publicly condemn acts of terrorism.

I was privileged to have a rare interview with him recently in he spoke openly about his faith, finding spiritual sanctity in Mecca, his determination to use his celebrity to build bridges between races and religions and his fears for the youth of Britain.

“Every religion has good and bad,” he told me. “Muslims got a really bad name because of 9/11 but there are many good Muslims, a lot more than the handful that are bad.

“I was only a kid of 14 but I was as shocked and appalled as anyone by what happened on that day, as I was with the London bombings in 2005, which I condemned at the time. I have never been afraid to speak out in situations like this, yet I know others have.” 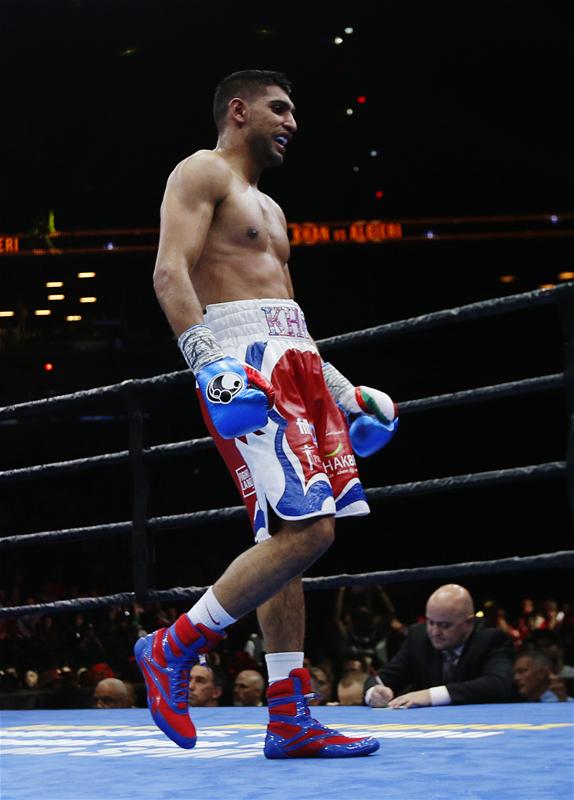 Unlike some sports personalities of varying religious persuasions, Khan doesn’t wear his on his sleeve, or his T-shirts. He attends a mosque on Fridays and prays briefly in his corner before the bell; but he does not preach or proselytise, and the Khan commitment to Britishness has always been evident from the days his Pakistan-born dad Shah supported him in the Athens Olympics seven years ago wearing a Union Jack waistcoat.

“My religion means a lot to me because it is one of the reasons I have got so far in life. I go to Mecca because I needed to thank God for all the success he has brought me. There are a lot of fighters who forget their faith but mine has always been with me.

“Mecca is an amazing experience. When you go there and you do your umrah or hajj [a pilgrimage Muslims must make at least once in a lifetime] you are like a new-born baby and you finish by cutting off your hair. You are forgiven by God and you start again. There is a tremendous spiritual uplift. It gives you great confidence because you know when you come back, you are closer to God, you are stronger.

“Mecca is right at the centre of the world. The world goes clockwise, and that is why in Mecca we all have to walk around clockwise too.

“I went to the place the Prophet was born and where the Koran originated. I have always followed my religion strictly but with the lifestyle I have, and with boxing being what it is with so many distractions, it is sometimes difficult. But my religion keeps me on the right path.

“I have never been shy of speaking about my religion, though I know there are a lot of Muslim sports personalities who are. I speak the truth because I am what I am, I’ve got nothing to hide. It’s the way I’ve been brought up. I have never been afraid of saying I am a Muslim.

“People respect you more when you are honest. Half the time I don’t have to get involved but I do because there are so many people looking for answers. I go to schools and colleges and speak to kids of all religions and it’s the same in my gym [the Gloves Community Centre in Bolton] which was opened by David Cameron. We have youngsters of all different colours coming in, around 500 a week. Bringing everyone together is something I feel I have to do.

“When you go to my fights there are fans of all different races. They buy tickets to watch me so I am always happy to do something in return. I’ve never said no to an autograph or a photo because these are the people who helped make me. Putting something back in the community is important.” 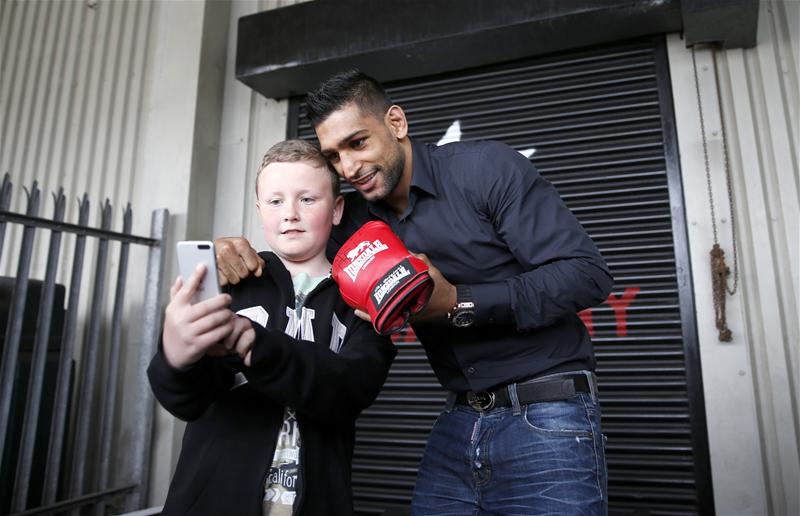 Few British sports personalities have immersed themselves in so many social projects: Khan has been involved in anti-bullying campaigns and keeping youngsters off railway lines, and also went to Pakistan to help rebuild after the flood disaster.

He has worked with the charity Horn of Africa to ease suffering in Somalia and on behalf of the NSPCC and Save the Children Fund.

“Unfortunately the government seem to be taking a lot of money out of community projects here. I am lucky to be involved in my own gym and to be able to put my own money into it [some £700,000]. If I hadn’t, it would have closed by now.”

Over the years Khan has hit a few headlines as well as his opponents, admitting he has made some mistakes “as you do when you are young”. But he is adamant that fame, the millions he has amassed and the A-list company he keeps in his new boxing base in California have not turned his head. “I’m still the same person I always was. I may look arrogant in the ring but I’ve always been humble. I try to be an example to youngsters back home. People in sport have the facility to deliver a powerful message and they should use it.”

While Khan, 29 in December, is not convinced that Mayweather’s gloves will remain gathering dust on the hook in his gymnasium, he is not holding his breath about being the chosen one should the Money Man make an expected ring reprise next spring.

”I have never believed Floyd fancied fighting me. He knows I have his number with my footwork and handspeed. But I am ready if he calls.”

It seems more likely he will end up facing one-time stablemate Manny Pacquiao, with whom negotiations are in progress.

Khan believes fight with Pacquiao would be “huge” and dismisses reports he could face former WBO light-welterweight champion Ruslan Provodnikov in his next bout.

Khan, who has not fought since defeating Chris Algieri on points in May, has also been linked with a Dubai showdown with Shane Mosley, while Provodnikov claimed his team were in talks over a November date in America. 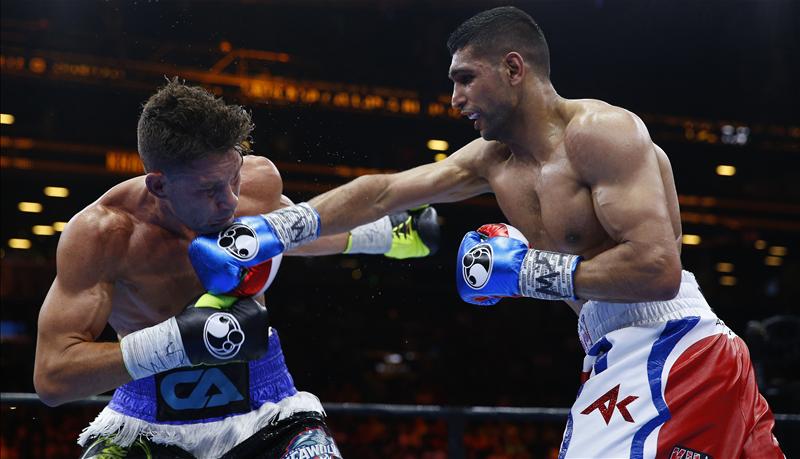 However, Khan insists: ”No one has approached me about that fight.

“I don’t know anything about it, Al Haymon (his adviser) has not even mentioned it to me.

“So I think it is just a rumour to be honest with you, but the Manny Pacquiao fight seems more likely to happen.”

While this could be in the Middle or Far East, the probability is it would happen in Las Vegas, which has become his second home as a fighter.

The only thing ‘Sin City’, America’s sleazy gambling citadel has in common with the Saudi Arabian hub of Islam is the surrounding desert. Yet good Muslim Khan has never had qualms about fighting there.

“It’s my job,” he shrugs. “Fighting and training in America is the best move I ever made. I built my international reputation”.

But his reputation as a young man who shows compassion when it is most needed was built at home in Bolton.