How Fury kept one jump ahead of his SPOTY critics

Gary Lineker looked even more apprehensive than Wladimir Klitschko when verbally sparring with Tyson Fury during the BBC Sports Personality awards in Belfast. Perhaps he was wary of copping a right-hander, or a mouthful of abuse.

In fact he got neither. Tame Tyson was a pussycat, polite, respectful and even apologised for some of the more outlandish things he has said.

He actually got closer to the SPOTY podium than many believed possible, finishing in fourth place only a few thousand votes behind athlete Jessica Ennis-Hill.

As I forecast, telling people not to vote for him had quite the opposite effect. I know some who dialled his number half a dozen times out of sheer bloody-mindedness.

There were anti-Fury banners and protests outside but Tyson and his missus Paris (you won’t minds me saying she looked pretty fit in a dress, Tyson!!) remained unfazed.

As you know, I have no regard for the oafish manner in which he sometimes behaves, but there was no doubt he deserved to be up there among the great and good of sport on Sunday night because of his phenomenal boxing achievement in dethroning the longest-reigning heavyweight champion since Joe Louis.

It was noticeable that some so-called fellow ‘personalities’ in the audience sat sat in their hands, po-faced bastions of political correctness, declining to applaud as Fury was introduced.

One not afraid to show his appreciation was the ultimate winner, Andy Murray, a decent guy who genuinely loves boxing and boxers. I wouldn’t mind betting he discussed with Fury afterwards how he employs fistic techniques in his tennis training.

Sometimes sport throws up some really classy people. Murray is, as is another Andy – Lee – the WBO world middleweight champion until relieved of the belt by Billy Joe Saunders 24 hours earlier.

As Murray said, while he totally disagrees with some of the things Fury says, he respects his right to say them.

One who obviously doesn’t is the world long jump champion Greg Rutherford, who peevishly had threatened to boycott the awards if Fury was not de-selected. Quite rightly the Beeb called his bluff.

Perhaps one question co-presenter Clare Balding (or was it cross-dressing comic Eddie Izzard as they looked distinctly similar?) should have asked Rutherford, but did not dare, was why he wanted Fury shunned because of his alleged hompohobia yet he himself had no compunction in trousering a nice little earner in the Diamond League athteltics meeting in Qatar – where homosexuality is illegal!

At least Fury had the satisfaction of finishing more than one jump ahead of Rutherford in the SPOTY poll.

Make that a treble!

Considering that with 12 world champions boxing outstrips other sports in terms of overall achievement in 2015, it was given relatively short shrift in the SPOTY programme – though Barry McGuigan was chosen to announce the main award in a show heavily biased towards Northern Ireland.

And am I alone in finding it curious that the first, second and third places were occupied by representatives of the three sports still screened regularly by the BBC: tennis, rugby league and athletics.

A coincidence, I’m sure, but what a happy one for the Corporation.

This Smith not crisp enough

As someone who voted for him as the Boxing Writers’ Club’s Best Young Boxer of the Year, I was disappointed by the poor performance of Mitchell Smith against George Jupp in Manchester. 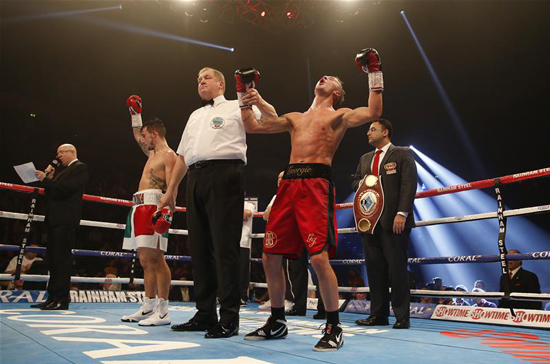 As Frank Warren said he let everyone down by not preparing professionally enough for the bout, relying on cockiness and over-confidence.

Perhaps he should take a look at how his namesake Liam Smith does things if he ever wants to emulate him and become a world champion.

We scribes haven’t had the best of, luck with our nominations for the award in the past couple of years. We usually pick winners, but 2014’s choice Kid Galahad promptly failed a drugs test and now Smith has got himself beaten.

The secret to the success of great fighters like Mayweather, Hopkins, Golovkin, Cotto and Alvarez is that they never stay out of training and so are always in condition. Certain British fighters please note.

Back to the draw-ing board

Liverpool was once renowned as the home of the football pools (whatever happened to them?) and after getting three draws in a row in Manchester Scouser Tom Stalker could be forgiven for thinking he’d actually come up on them. 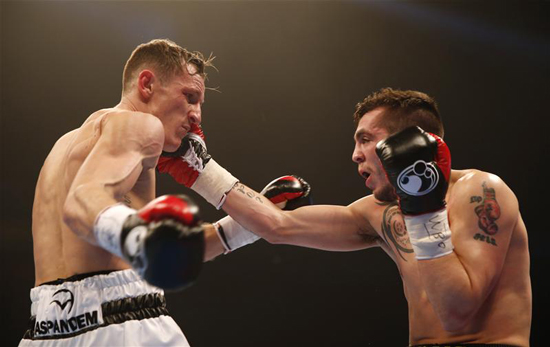 Marbella-based Tom did not have the best of fortunes in the 2012 Olympics, where he captained the GB team, getting the rough end of a dodgy decision against a Mongolian in the quarter-finals, and has been not been over-endowed with luck since turning pro.

How many of the Manchester Arena’s patrons on Saturday realised they were in the presence of ring royalty?

The man wrapping the belts around some of the champions, Istvan Kovacs, is a living legend of boxing, the finest fighter to come out of his homeland Hungary since the fabulous Laszlo Papp.

He finished his amateur career with an outstanding record of 282 wins, 14 losses and one draw before going on to win the WBO featherweight title as a pro in 2001. He was beaten only once in 22 pro bouts, by Juan Pablo Chacon.

As veteran ringside judge Dave Parris pointed out to me ‘Koko’ Kovacs, who was known as The Cobra when Carl Froch was a mere hatchling, is the one fighter Naseem Hamed – also present in Manchester – declined to meet.

In June 2000 he had a shutout victory over Steve Robinson for the EBU belt and became the mandatory WBO challenger for Hamed.

But Naz chose to relinquish the title and fight Mexican Marco Antonio Barrera instead. And we all know what happened then.

Trim Kovacs who now runs a restaurant in Budapest and is a WBO supervisor and the current WBO vice-president for Europe, barely looks a kilo over his fighting weight.

Frank said he’d deliver for me, and he did. Now I’ve delivered for him. I’ve been with him since the beginning and I’m sticking with him until the end.

I’ve said a lot of stuff in the past but none of it with the intention to hurt anybody. It’s been tongue in cheek, it’s all a game to me. I’m not really a serious type of person, everything’s happy-go-lucky with Tyson Fury. But if I’ve said anything that’s hurt anybody, I apologise.

Sorry is not the hardest word for Tyson Fury. Until the next time, perhaps?