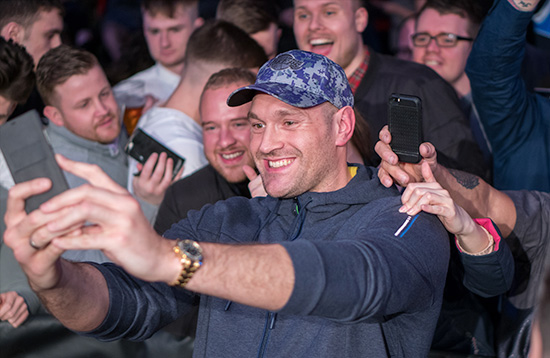 The last time I saw a fighter mobbed as much as the re-born Tyson Fury his name was Muhammad Ali. Like The Greatest, the fan-friendly Gypsy Giant has become the Pied Piper of pugilism.

At Leicester’s Morningside Arena last weekend hundreds thronged around the still unbeaten lineal heavyweight champion as he made his way to the ringside to be interviewed during Frank Warren’s action-packed show jointly headlined by the two Sams, Maxwell and Bowen.

No pop star, movie legend or rapper could have had more adoration heaped upon him by the jostling public.

The man who was once the game’s pariah because of his irresponsible behaviour and bad-mouthing has pulled himself together in mind and body, made a bonfire of his profanities and turned his once tormented life around to become as almost as much of a national fistic treasure as Sir ’Enry or Frank Bruno.

Long may it last. I have had my own verbal punch-ups with Fury in the past when he declined to mind his language but I salute him now for a transformation that is more a resurrection.

Not only in the ring but in his persona that is now very much grata. He is surely the most popular fighter in the land, if not the world after the manner in which he prised himself off the canvas to be awarded a draw with Deontay Wilder in LA in a fascinating battle of wits and wiles which almost everyone save those myopic judges believed he had clearly won.

Moreover in Leicester he revealed himself as a shrewd and clinical analyst of the proceedings in the ring which bodes well for a future commentary career when his fighting days are done.

Now we await with relish his next ring appearance against German Tom Schwarz, in Las Vegas, on June 15, to be screened exclusively by BT, which we hope is the first step on a three-bout ladder leading to a return with Wilder or the ultimate denouement with Anthony Joshua next year.

The scenes in Leicester, and at a couple of shows he attended before that, were in my mind almost reminiscent of those in Atlanta Georgia, almost half a century ago, when Ali came out of a government-imposed three-

Of course, not even in his most irritatingly bombastic days would Fury have compared himself to Ali.

Yet like Ali, Fury never lost his world title in combat, with both having their respective belts controversially confiscated by the powers-that-be for happenings outside the ring.

Ali could have plucked any washed-up old pug from Palookaville for his initial comeback contest in Atlanta. Instead he selected 25-year-old six-footer Jerry Quarry, a big-punching world ranked former title contender and arguably the best white heavyweight in the world since Rocky Marciano. He had been voted America’s most popular fighter by Ring Magazine.

We well remember Quarry over here from when he came to fight the British champion Jack Bodell, a cumbersome, inelegant southpaw, at Wembley. Quarry right-hooked the stumbling Bodell – who tripped over his own feet when they came to touch gloves – to oblivion in two rounds and in the locker room afterwards someone asked the Californian if he had found Bodell at all awkward. “Well,” he replied. “He sure fell awkward.”

I was at Ali’s sell-out bout with Quarry on October 26, 1970 at Atlanta’s City Auditorium, the build-up to which was one of the most bizarre and memorable I have experienced in my 60 years of covering the sport.

Atlanta, the heartland of Gone With the Wind country in America’s Deep South, had been invaded by hundreds of black celebrities from all over the United States. Fight night itself was like a scene from the musical Porgy and Bess and wherever Ali went he was followed through the streets by several hundred kids like some pugilistic Pied Piper.

As for the fight itself, Quarry, puzzled by Ali’s unorthodox style and unwilling to commit himself, was unable to launch an effective attack. About all he could do was counter with swinging left hooks, most of which missed or were brushed off, although he did land one solid punch – a right hand to the body in the second round.

Then, in the third, with a cracking right hand, the speed of which seemed hardly impaired since he last fought against Zora Folley three years earlier, Ali sliced open a cut over Quarry’s left eye in the middle of the round, a wound which would require 11 deep sutures and would not allow him to come out for the fourth round. “It was not a butt,” Quarry said

before being stitched up. “And I don’t want anybody saying that it was. It was a right hand.”

Naturally, the crowd went wild and there was dancing in the streets, just as there might well be here should Fury eventually snatch back those belts he, and his worshipping fans, believe are rightfully his