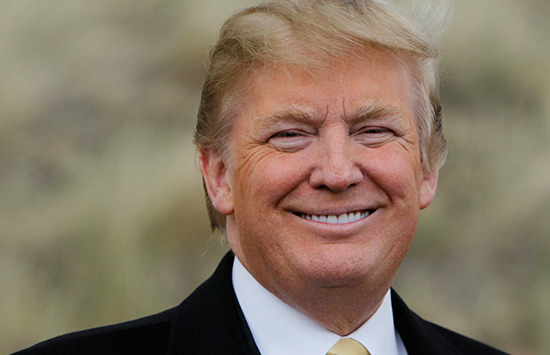 We first encountered Donald Trump back in 1988. He was a boxing promoter then, among other things, and when we chatted with him in the build-up to Mike Tyson’s world heavyweight title fight in Atlantic City against Michael Spinks, who would have dreamed we were in the presence of the man who is to become the 45th president of the United States.

The political lightweight in the red corner came out fighting from the bell in the presidential punch-up against a seasoned contender, landed several viciously low blows but claimed a substantial majority decision which has left the world reeling in disbelief.

And there is little doubt that the fight game aficionado learned from his earlier association with boxing how to conduct a campaign that was redolent with the rhetoric of the ring: crudely bad-mouthing and dissing his opponent.

But when the scorecards cards were counted and the winner’s hand held aloft, came the conciliatory verbal embrace which suggested it was all simply psychological warfare.

Ok, so maybe it wasn’t quite as cosy as that with the vanquished Hillary Clinton last Tuesday but at least Trump has been reasonably if uncharacteristically gracious, so you get the drift.

Whatever else the world is hit with now, at least he will be a benign influence for boxing in the White House.

One of the most fascinating things about his campaign was that a good number of black boxing personalities stumped for Trump, a so-called ‘racist’, including Don King, George Foreman, and significantly Mike Tyson who is now a Muslim.

Tyson and Trump go way back, to when the Iron Mike hired Trump as an adviser in the eighties, and there has always been a firm bond between them.

The former world heavyweight champion has said that he supported The Donald because he feels Trump gives him respect, and that the feeling is mutual.

Announcing his political allegiance Tyson said: “Listen: I’m a black mother***** from the poorest town in the country. I’ve been through a lot in life.

“And I know him. When I see him, he shakes my hand and respects my family. None of them – Barack, whoever – nobody else does that. They’re gonna be who they are and disregard me, my family.

“We’re the same guy. A thrust for power, a drive for power. Whatever field we’re in, we need power in that field. That’s just who we are.

“We’re really good friends. We go back to ’86, ’87. Most of my successful and best fights were at Trump’s hotels. He didn’t manage me, though he helped me with my court case.”

Tyson stood trial for rape in 1992. He was found guilty and served a three year prison sentence.

In the mid-late eighties Trump ruled Atlantic City and forged it into a boxing mecca, with heavyweight juggernauts like Mike Tyson, Evander Holyfield and George Foreman all being hosted by the now president-elect.

Trump’s ingenuity to build his Trump Plaza with a walkway over to the Convention Centre made the city relevant in the boxing world, hosting Tyson’s biggest fight – while he was still undefeated. The mega-bucks that he brought into the sport changed it forever.

Trump bid a record $11million to have Tyson’s fight against Michael Spinks in 1988 held at the Atlantic City Convention Hall near his hotel, even helping to officiate at the weigh-in.

Tyson famously knocked Spinks out in 91 seconds, earning some $20million

I remember the fight well. I happened to be seated next to the man from the London Times who, for some reason, had not sent their admirable boxing correspondent, Sri Sen.

Instead my companion was a rather fey columnist who usually wrote about wildlife, who had never seen a live fight before and clearly despised the sport.

When Tyson’s venomous punches started to batter the hapless Spinks he dived under the ring crying:”I can’t watch this. It’s too brutal! Awful!”

For the boxing legacy he built in Atlantic City, Trump was inducted into the New Jersey Boxing Hall of Fame.

Tyson, who converted to Islam while he was serving his three year sentence for raping an 18-year-old girl, has drawn comparisons between himself and Trump.

Trump publicly defended Tyson after the conviction claiming that, if anything, the boxer was a victim of being touched inappropriately by women, saying: “I’ve seen women going around touching him. He walks in a room and the women start grabbing him and grabbing his ass and grabbing anything else they can grab on him.”

Well, as we know, it turned out Trump knew a thing or two himself about sexually inappropriate behaviour.

He called Tyson’s conviction of raping Desiree Washington a “travesty”.

Tyson’s fights in Trump’s hotels and casinos had been highly lucrative, reaping millions from the surge in gambling that resulted.

Earlier this year Trump noted Tyson’s support for his presidential campaign. Speaking during a visit to the state of Indiana he said: “Mike Tyson endorsed me. I love it. You know, all the tough guys endorse me. I like that, OK?”

Well Foreman and King certainly did.

Though not so Bob Arum, of course. He still claims that he and late fellow promoter Dan Duva was ‘swindled’ out of $2.5 million by Trump in a sponsorship deal which fell through before the Foreman-Holyfield fight in Atlantic City in 1991.

Democrat Arum, who had worked as an attorney for John F Kennedy, publicly berated fellow octogenarian impresario King for his support of Trump, whom he hates so much he once challenged him to an actual fist fight, the proceeds going to charity. Trump demurred.

“He’s a clown, a disgrace,” says battling Bob.” Him becoming president is a very sad day for America.”

Although no longer actively involved in boxing, Trump still follows the sport avidly, and the golden comb-over is frequently seen at big fights in the US.

He also tweets about them, especially when results displease him, like Floyd Mayweather jnr’s split decision victory over Marcos Maidana which he termed ‘outrageous and a disgrace.’

Ironically words that have come back to haunt him following his own famous – or as many claim – infamous electoral triumph this week.

But what cannot be denied is that Donald J Trump has boxed very clever indeed to install himself in the White House.