Alan Hubbard on the triumphs, and tragedies of the British lightweights who ruled the world

If Terry Flanagan becomes the first Englishman to win a world lightweight title this weekend – and I have a hunch the Turbo-charged Mancunian might outsmart the big-hitting Californian Jose Zepeda in a boxer v puncher classic – he will join an elite band of battling Brits.

For only four other Britons have ruled the 9st. 91b division in over a century: Freddie Welsh, who as his surname suggests, originally hailed from the Valleys, and a trio of Scots, Jim Watt, Ken Buchanan and Ricky Burns.

Welsh is long gone. He died in 1927 aged only 41 and although born in Pontypridd he turned professional in Philadelphia in 1905 and spent the best part of his career living and fighting in the United States.

The ‘Welsh Wizard’s real name was Frederick Hall Thomas but he changed it to Freddie Welsh both in recognition  of his homeland and so his mother would not know he was a professional boxer.

Britain had to wait 53 years before gaining another world lightweight crown and then three Scots came along- though not quite together.

Buchanan was to say later: “Laguna was the champion and he thought I’d go down the Swanee dead easy with the heat and everything. He spoke to me years later through an interpreter. I met him at the Hall of Fame when I became the first living British boxer to get in there. He said that he expected me to collapse after eight or nine rounds.”

Yet it was a triumph the British Boxing Board of Control refused to recognise because of an ongoing dispute with the WBA.

When he eventually lost the title in June 1972, it was to another Panamanian, the then undefeated Roberto ‘Hands of Stone’ Duran at Madison Square Garden in New York, a contest which had a highly controversial ending.

Duran was ahead on all three cards at the end of the 13th round when both fighters exchanged punches after the bell. Buchanan went down, writhing in pain from an obviously low blow that his American trainer, Gil Clancy said was caused by a knee to the groin.

Referee Johnny LoBianco awarded the fight to Duran, insisting that the blow that took down Buchanan was “in the abdomen, not any lower” and that he felt that Buchanan would be unable to continue fighting. Columnist Red Smith of the New York Times laconically observed that LoBianco had to award the victory to Duran, even if the punch was  low, as “anything short of pulling a knife is regarded indulgently” in American boxing.

Seven years later it was Kenny’s fellow Scot Jim Watt – who Buchanan had outpointed in a 1973 British title fight – who was to become world lightweight champion when Duran vacated the title. He knocked out Mexican Alfredo Pitalua in 12 rounds at Kelvin Hall, Glasgow, subsequently losing the WBC crown to the late, great Nicaraguan Alexis Arguello in his fifth defence two years later. 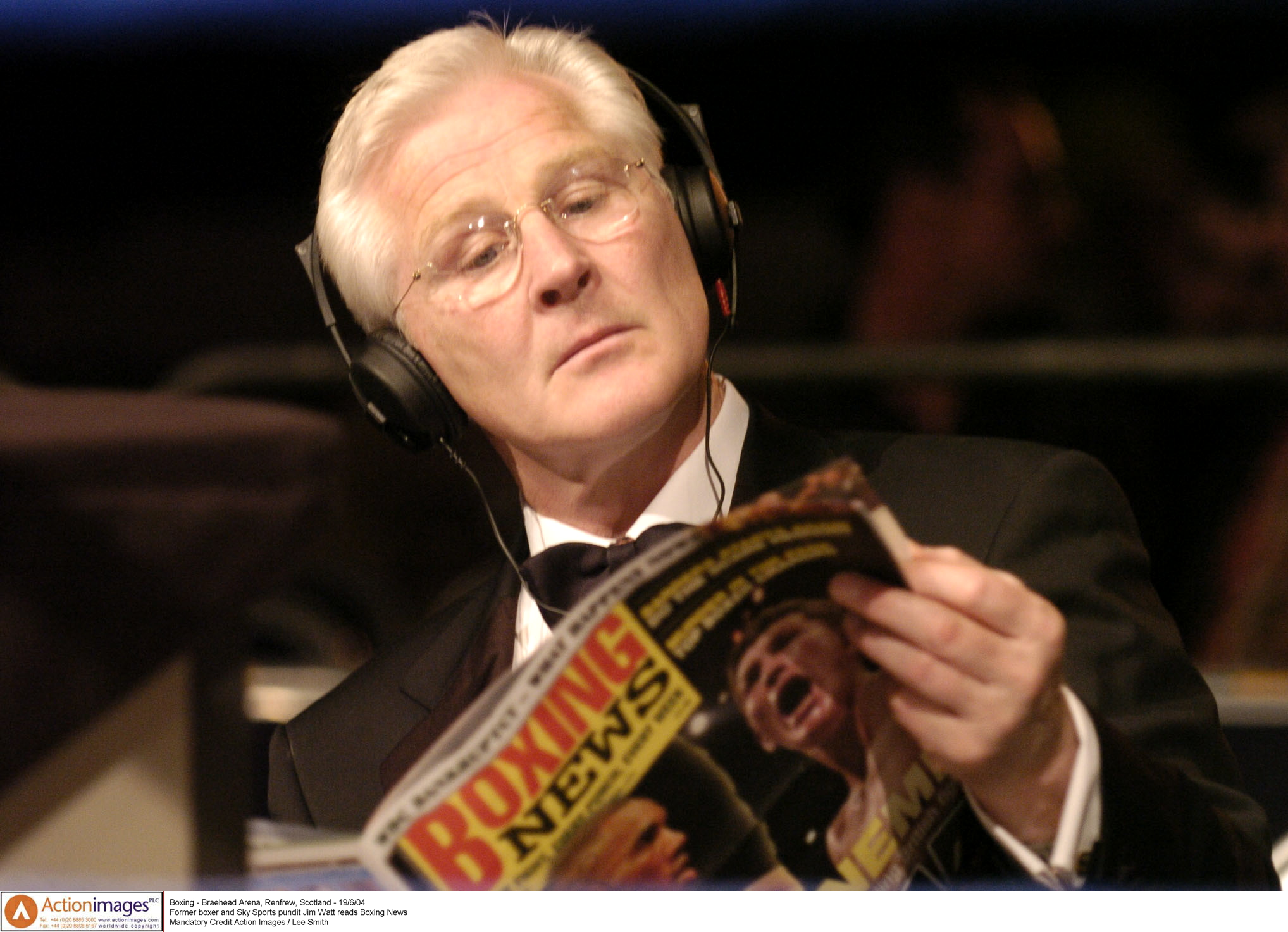 Jim Watt in his post-boxing days

And so to Ricky Burns, from Coatbridge, who moved up from WBO super-featherweight kingpin to be installed as interim lightweight champion after former champion Juan Manuel Marquez became a welterweight. Then stylish Scot held the title for three years before losing his form – and the title to American Terence Crawford.

All three Scots have suffered their share of misfortune. Burns, 32, and now campaigning at light-welter, was declared bankrupt earlier this year with only £228 to his name and debts of £419,888 after contractual legal battles.

His predecessors, Buchanan and Watt were the noblest of artists who wore their crowns with pride and distinction, though by a cruel irony, both have suffered their own wretched personal tragedies in retirement.

Watt, who will be 67 next week, and is a much-admired TV boxing analyst, has just buried his daughter Michelle, also a celebrated TV personality in Scotland, who took her own life after painful illness at 38.

This tragedy came 20 years after his teenage son Jim jnr was killed in a car smash.

For Buchanan, while life after boxing has has touched him with such heart-rending grief, it has been one devastated by penury and alcoholism.

Buchanan turned 70 last month, making him alongside 79-year-old Terry Downes one of Britain’s most enduring former world champions. But last December year, homeless and penniless, he was admitted to a psychiatric hospital for alcohol addiction after being found slumped on an Edinburgh park bench clutching a half-empty a bottle of wine.

It was the third time in a month medics had to attend the former ring hero, who won 61 of his 69 fights as a pro and was elected to boxing’s Hall of Fame in 2000. He was also reported to be suffering from some memory loss.

His estranged 48-year-old son Raymond said at the time: “It is so sad thinking of him in that state. He achieved so much in his career and is worth so more than that.”

How true. Many rate him as the greatest pound-for-pound boxer ever to come out of Britain, one who possessed terrific technique laced with courage and an obdurate hardness.

It is good to know that twice-divorced Buchanan is now getting back on his feet, albeit living in sheltered accommodation but sufficiently recovered to reminisce about his glory days in the ring as well as the daily battle with drink that has consumed him for so long.

“I’m trying to control it, but I cannae all the time,” he says of his drinking. “I think of one or two bad things that happened to me in my life and I should say ‘No’, but I just go and have a drink and that.

“I tell young guys and young lassies, ‘Watch your drinking because, I’m telling you, it’s killing me’.”

Most of the money he had earned (his £41,000 purse against Duran 42 years ago was a record for a lightweight at the time) he lost in failed business ventures.

Before he returned to his old trade as a joiner to earn a few bob his career had embraced 69 professional fights and 555 rounds of classically brilliant boxing.

In the two years between autumn of 1970 and autumn of 1972, he fought at The Garden five times.  He twice appeared on same bill at MSG as Muhammad Ali, once even topping it and sharing a dressing room with The Greatest when Ali fought Oscar Bonavena  in 1972.

On that night Buchanan beat another Latin legend, Carlos Ortiz but his Garden party I recall best is when he fought a title return with Laguna in September 1971. Then occasion coincided with the US Open tennis tournament and The Guardian sent along their tennis correspondent, the late David Gray, a lovely man man who had never been to a fight before.

He turned up at ringside in a pristine white suit and watched enthralled as Buchanan gave his usual a ethereal exhibition of boxing. But by the 11th round a grotesque swelling had formed over the Scot’s left eye, virtually closing it. The doctor was called at the interval and expressed concern.

“Slit it Eddie, slit it!” Buchanan’s cornerman Eddie Thomas was urged from ringside. He did so, slicing the swelling with a razor blade, the blood cascading everywhere.

“Fifteen love!” remarked a fellow scribe, nudging a wincing Gray who acknowledged that Wimbledon it wasn’t.

Mind you Gray wrote a good piece, and reacted rather more professionally to his boxing baptism than did another broadsheet wordsmith, a fey chap from the The Times on another violent night in Atlantic City in 1988.

Best known for his passion for all things equestrian, and an expert on wildlife, he was despatched, for some strange reason, to cover Mike Tyson’s brief encounter with Michael Spinks rather than their regular boxing correspondent, then the admirable Sri Sen.

I sat next to him at ringside as Tyson, then at his venomous peak, took just 91 seconds to belabour Spinks into unconsciousness. But when I looked around the man from The Times wasn’t there. He has disappeared under the ring, emerging white-faced when it as all over to declare that he hated boxing and couldn’t bear to watch such unbridled brutality.

Something that the great Scot Buchanan would have found beyond his Ken.