Alan Hubbard, an award-winning journalist who is one of Britain’s most experienced boxing writers, is to contribute regularly to our website. He is boxing correspondent for the Independent on Sunday and former sports editor of The Observer, covering big fights from Atlanta to Zaire in half a century of ringside reporting.

Here he delves into Hubbard’s Cupboard to look back on the two most controversial and still-debated, defining moments in the career of the great Muhammad Ali

Two of the biggest regrets of my journalistic career are that I never saw Muhammad Ali – then an 18-year-old upstart named Cassius Marcellus Clay Jnr – win his Olympic gold medal in Rome in 1960 and four years later become the then youngest heavyweight champion of the world in Florida’s Miami Beach. 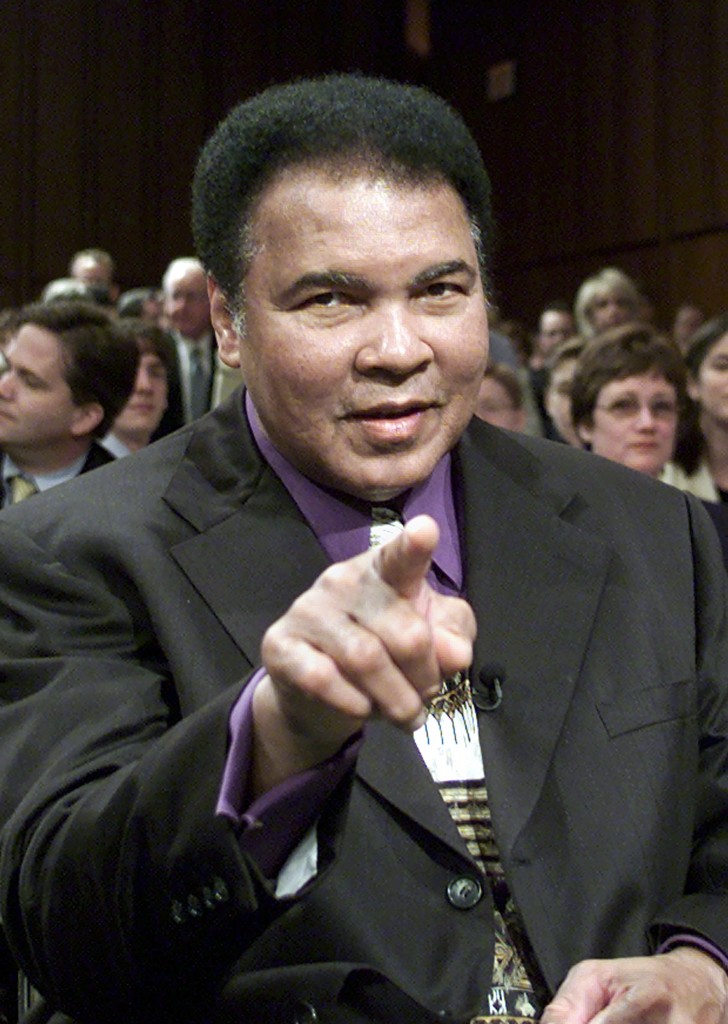 I was a cub reporter learning the ropes on local newspapers back in the early sixties but I have been fortunate enough to cover the majority of Ali’s subsequent fights, embracing the Rumble in the Jungle, the Thrilla in Manila and so many memorable, magical moments in so many places – Kuala Lumpur, Atlanta, New York, Las Vegas, Los Angeles, New Orleans, Dublin, Frankfurt and London.

Many highs…and sadly one or two lows. I admit the only time I have shed a tear in sport was at the ringside in the 18,000 capacity Caesars Palace car park in Las Vegas on October 2 1980 watching an icon disintegrate before our eyes. Ali, a 38-year-old robotic shell of the sublime athlete of his heyday, suffered a savage beating that even his opponent, Larry Holmes, was reluctant to administer, repeatedly beckoning to a dispassionate referee to end his erstwhile idol’s agonising humiliation.

It was Ali’s career-long cornerman, the late Angelo Dundee who finally did so. “I am the chief second and I stop the fight,” he shouted to the referee as a dull-eyed Ali slumped on his stool at the end of the tenth round. It was too late to save Ali’s career, but it probably saved his life.

But the occasion etched most indelibly in the consciousness came via the small screen 51 years ago when, aged 22, Ali beat the Mafia-run Sonny Liston, an ageing but seemingly invincible ogre and indeed “shook up the world”.

He did so twice, first by forcing Liston to retire at the end of the sixth round and then announcing that Cassius Clay (“my slave name”) was no more and that he accepted the teachings of Islam and Malcolm X’s influence. “Until then”, his late trainer Angelo Dundee said, “I always thought Muslim was a piece of cloth.”

I confess when he first fought Liston I did not give him a prayer. Liston was the most terrifying individual I have ever encountered in boxing. Compared to him, Mike Tyson was a pussycat.

There was nothing sunny about Sonny. A sullen, brooding hulk who had served time for armed robbery and who had clubbed most opponents senseless, including another great Olympic champion, Floyd Patterson. I thought Liston would annihilate Cassius and I was not alone.

Liston was a fighter run by racketeers, his manager having close association with two of the mob’s most infamous hit men, Frankie Carbo and “Blinky” Palermo who, at the time, had their claws into boxing and had been known to profit from betting coups on fights.
The pair were later convicted of conspiracy and extortion and jailed over their boxing activities but before his death, aged 91 in 1996, Palermo bequeathed us a memorable quote. “The trouble with boxing today,” he bemoaned, “is that legitimate businessmen and horning in our game.”
Liston had learned to box while in jail and it was widely reported that he broke bones for the underworld figures who held the majority stake in his professional contract.

Clay, the loudmouthed braggart, was not to America’s liking either. It was a fight with no hero but two villains.

The fight publicist, the late Harold Conrad, was to say: “Liston scared Patterson just by looking at him and here comes this big-mouth kid. Liston didn’t train at all for that fight. He worked out a little and went to the gym. He would hang out at a beauty parlour, banging on some of the chicks. I’d tell him, ‘This kid is big and strong, he’s fast and he can hit.’ Sonny would just answer, ‘Ah you’re kidding. I’ll scare the shit out of that nigger faggot…I’ll put the eye on him.'”

But as it happened, it was Clay who put the eye on Liston. Learning that Sonny, said to be 32, but probably nearer 40, had a phobia about madness, he put on an jaw-dropping act at the weigh-in, foaming at the mouth and screaming like a dervish.

It seemed to scare Liston witless and by the end of the sixth round of a baffling fight he became the first heavyweight champion since Jess Willard in 1919 to quit on his stool, battered, humiliated and saying he had a shoulder injury.

The crowd screamed “fix” but I have never subscribed to that theory. Fighters who take a dive don’t endure the sort of beating that Liston did that night.

Ali, as he was to become after the fight, was already the master of the mind game and he simply psyched Liston out of it, and did so again in the even more bizarre return at Lewiston, Maine, when Liston fell in the first, caught off balance by the so-called “phantom punch”.
Boxing is big on nostalgias – probably more than any other sport- and this month sees two historic anniversaries celebrated. It was 30 years ago this week that on a cool summer night at QPR’s the Loftus Road football ground Barry McGuigan brilliantly deposed the long-reigning champion from Panama, Eusebio Pedroza, to win the WBA world featherweight title.
And also exactly a decade since the inimitable Hitman, Ricky Hatton, set not only his beloved Manchester but the entire nation alight by forcing the IBF light-welterweight champion Kostya Tszyu , one of the top pound-for-pounders in the world, to quit on his stool.
But it is the 104 second fiasco in St Dominic’s Hall in hick town of Lewiston half a century ago on 25 May 1965 that has fight buffs scratching their heads to this day.

Again some said it was bent. But I believe Liston, a tired old man knowing he would be cut to pieces by the arrogant youngster hovering over him and famously yelling, “Get up you bum, get up you bum and fight!” simply bottled it, fearing he was again going to be humiliated and probably sliced to pieces.
Like all bullies, he was a coward at heart, and though he rose reluctantly, there was no desire left in him as the confused referee, former champion Jersey Joe Walcott, belatedly heeded the timekeeeper’s shout that Liston had not beaten the count.

Six years later Liston was found dead in his Las Vegas home, supposedly from an overdose of heroin. However, the suspicion remains that he was bumped off, curiously one of several of Ali’s opponents to die either violently or mysteriously.

It was said Sonny died from a drugs overdose but here was a man so scared of needles that when he was training for the second Ali fight and suffering from flu he tried to throw the doctor attempting to inoculate him out of the window.

Many in boxing believe Liston fell victim to loan sharks who had hired him to be one of their debt collectors. “But Sonny wasn’t satisfied,” publicist Conrad, who was close to Liston, once told us. “He wanted a bigger piece of the action.

“But they weren’t going to let anybody cut into their turf. So one night they got him stinking drunk, took him home, jabbed him with an OD and that was the end of Sonny.”

Ali went on to reign in an age when boxing crowns were not tawdry bits of bling. He turned it into an art form, making a ballet out of brutality.
In a recent picture The Greatest looked in better fettle at 73 than he has for some time, wearing a smile and a red nose as he helped celebrate America’s first Red Nose Day. That is good news.

For even though the dancing years have ebbed away and because of Parkinson’s the inimitable shuffle is no longer a dazzling quickstep but a distressingly slow wobble, he remains the most recognised human being on earth, and the best-loved sports figure of all time.. 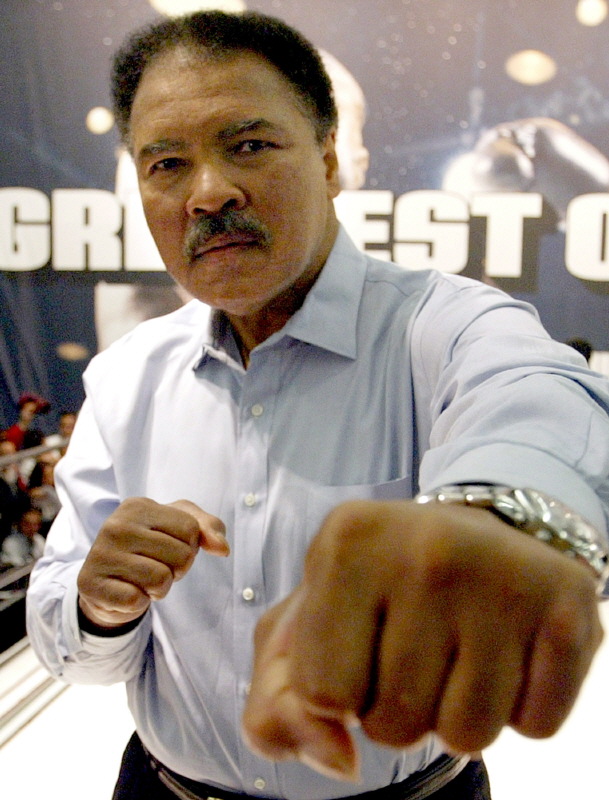