Britain’s next big heavyweight hope- a true artist on canvas

At 6ft 6in and 17 stones Joe Joyce is on course to be one of the big hits of British boxing, beginning at next year’s Olympic Games. Note the name, because JJ is one unusual fighter – a true noble artist, as much a dab hand with the paint brush as he is with a left hook. 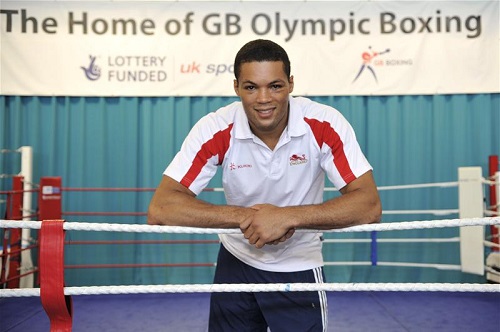 Outside the ring he is something of a gentle giant, admitting he prefers daubing paint on canvas rather than splattering the noses of opponents, though he hopes his proficiency with the palette will help him realise his dream of opening his own studio and holding an exhibition of his work.

Currently Joyce, the super-heavyweight successor to Olympic champion Anthony Joshua on the GB squad, is on the brink of qualifying for Rio  after some stunning victories when representing the British Lionhearts in the World Boxing Series (WSB) tournament, an mix-and-match national teams scrap without headguards or vests under basic professional rules over five rounds, and which serves as an Olympics stepping stone.

He compounded this with a gold medal in the recent inaugural European Games in Baku, Azerbaijan, which gives him an automatic place in the upcoming world championships in Qatar.

The 29-year-old Londoner who has a 2-1 University degree in fine arts  obviously paints a pretty good picture in the ring, having this year gone into the Havana backyard of the Cuban champion Lenier Pero and defeated him.

That’s some feat as no other WSB boxer has won in Cuba. A further rare victory in China suggests there every hope he can emulate 2012’s kingpin Joshua, now impressively moving up the pro ranks.

Joyce is understandably keen to play down the comparisons in his own bid to be crowned Olympic king, saying:  “I guess Anthony has led the way – we’re different people and we’ve got different paths to follow but obviously you look at what has gone before so that you can improve yourself.”

It is  certainly bizarre, to say the  least, to discover a pugilist who can chat as keenly about the work of another of his heroes, the American Jean-Michel Basqiat, famed exponent of Neo-Expressionism and Primitism who died aged 27 from a heroin overdose, as he does about slipping a  jab.

His love of art has been inherited from his parents, father Philip, a Scots-born Irishman, and his mother Marvel, whose ancestry is Nigerian. “Dad painted and mum was good at pottery,” he says. “They both loved art and   I really got into it at school where I had good teachers who encouraged me  to do an Arts Foundation degree at university.”

His own personal favourite work, produced in a small studio at the south London flat where he lives with his mum , is the lifesize portrait in oils of Ali.“What I used to do at first was draw in pencil but now I go straight to the brush. I’ve had offers for the Ali picture but I don’t want to part with it at the moment though one day I might put it up at auction.

“The idea of photo-realism is to make the painting more interesting than the photo you are working from.”

He has also produced portraits of Bruce Lee, Michael Jackson, tennis’s  Williams sisters and Beyonce (”though that one’s a bit dodgy”) but says his preference is for the abstract and symbolic. “I really like Picasso. His early work was amazingly accurate before he turned to symbolism.”

The former ABA champion and European bronze medallist who won Commonwealth Games gold in Glasgow last year, Joyce was  a late starter in boxing. The artist who was also a martial artist in karate and king fu, had a decent rugby career as a teenage flanker and second row forward with Rossyln Park and worked as a lifeguard, swimming and diving instructor.

He was also into athletics at Middlesex University but an Achilles injury halted his progress as a long jumper and triple jumper. His boxing career only took off at 22 after he wandered into the University gym and started punching the bag before being invited to spar. “Boxing immediately grabbed me.I knew I could be good at it.  What appealed to me was that it has so many aspects, so many different training regimes, and the discipline it instils. And when you win –wow!  You get such a  high from having your arm lifted.”

Joyce joined his local club Earlsfield ABC and progressed to the GB squad in at the English Institute of Sport in Sheffield pre-2012, though he was the super-heavyweight shadow boxer to Joshua, with whom he regularly sparred. “We get on well but every time I’m mentioned, it is in the same breath as him. It would be nice to be recognised in my own right.”

No doubt he will be should he emulate Joshua in Rio. He says he would then seriously consider turning pro should he get “an unrefusable offer.” He’ll be 30 by then but luckily for him heavyweight boxing doesn’t suffer from ageism these days, with the top men now reaching their prime in their thirties. His progress has already been noted by Frank Warren who says:”He seems to have great talent.”

Obviously for painting as well as punching. “My immediate aim is Rio but after that, we’ll see. Every heavyweight gold medal winner  thinks seriously about cashing in. It all depends on what is on offer.

“Boxing comes first for now so the aim is simply to keep winning and maintain my unbeaten record through the season. But my ultimate ambition is to be able to afford a large studio and hold my own exhibition.

“Though I am concentrating on boxing at the moment when my body can’t take any more punishment I can fall back on my art to because I will still be able to lift a brush.”

He recognises that still lacking in his fistic armoury is a big ko punch, though he managed to put his Russian in hospital after pounding him in their final in Baku.  “I  like to think my way through a fight and use my ringcraft but it’s something I’m working on

“A lot of heavyweights are big and strong but they cannot match me for work rate or the number of punches I throw.  They get tired after the first three or four rounds and that works in my favour.”

For a big man, Joyce’s trademark somersault into the ring is as spectacular as were Naseem Hamed’s acrobatics.

The bright lights and big money surely will beckon if he paints a golden picture in Rio though at the moment the artist informally known as JJ seems more interested in visiting the Louvre than Las Vegas.

Clearly, this ring Rembrant is no ordinary Joe.

However he is is not the first British boxer to pack his paintbrushes  alongside his gumshield and gloves in his kit bag, or have an interest in the classics.

Kevin Finnegan, the former British and European middleweight champion, younger brother of Olympic gold medallist Chris, was a talented painter, as well, as well as a ballet aficionado.

Throughout his 47-bout career in the seventies and eighties, during which he twice bravely battled Marvin Hagler, Finnegan combined fighting with painting and the gym in Battersea where trained was littered with his work. Like Joyce he spoke of his desire to paint full time when he had made enough money and some of his landscape work and portraits were displayed at a national gallery in London. He died in 2008 of heart disease aged 60.

Interestingly some famous heavyweight champions have also been students of the classics. The erudite Gene Tunney was a close buddy of George Bernard Shaw and Mike Tyson’s reading while in prison was Niccolo Machiavelli,Voltaire Dostoevesky, and Alexandre Dumas. He claims his personal redemption came through literature.

And Ukraine’s Klitschko brothers – Vitali and Wladimir, both PHDs –  are more likely to be seen with a copy Goethe under their arm than the Ring Record Book.

Tomorrow: read Alan Hubbard’s Punchlines on the fighter who really was the greatest of them all  – and the sweetest