How the Dark Destroyer has found peace as a true warrior

Nigel Benn is a name which evokes memories of the days when his blood and bravery epitomised the glorious rawness of the ring, but culminated in descent into self-admitted debauchery and ultimately despair.

Fortunately the “Dark Destroyer” saw the light some years back, forsaking a libidinous lifestyle which took him to the brink of suicide to become a born-again preacher, a Bible-punching pastor with a mission to help old soldiers like himself to come out fighting again.

Las Vegas, Atlantic City, Wembley, Earls Court and Old Trafford were among the illustrious theatres of war for the former squaddie who was twice a world champion and whose 48-fight career was highlighted by the titanic two-bout rivalry with Chris Eubank which makes much of today’s latter-day, over-hyped feuding between lesser combatants seem like neighbourly tiffs.

But that was another era, when Benn was another person. Today he has found an inner peace and it is a relief to hear that recent talk of him and Eubank renewing their ring rivalry in a real life Grudge Match at a combined age of 100 was no more than a bit of a giggle. 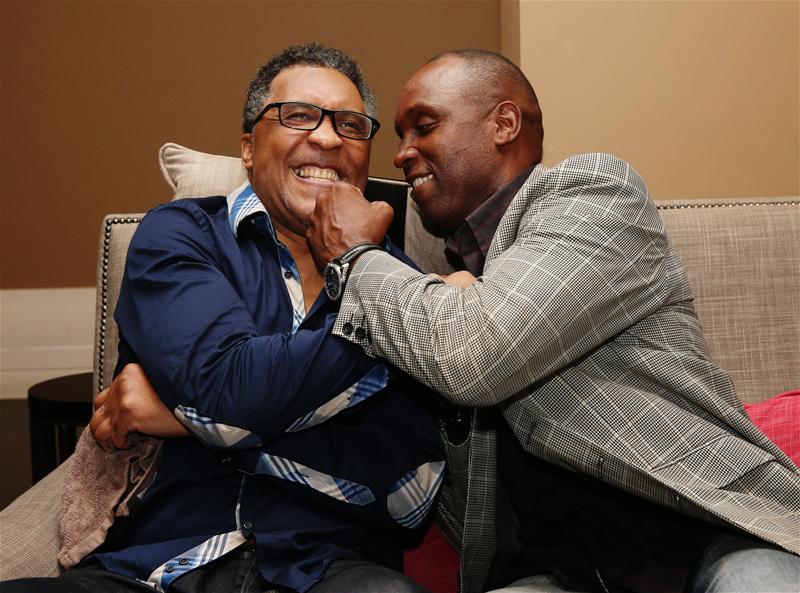 Benn is much keener on furthering the boxing career of his 18-year-old son Conor, just as Eubank is doing with Chris Jnr.

Like Eubank Jnr, Conor has some way to go to eclipse his father’s feats but he hopes to make the Rio Olympics next year-for Australia, where the family moved to in 2013.

A couple of months back Benn Snr took to the pads with Ricky Hatton, looking as sharp as ever, during a visit to The Hitman’s HQ in Manchester to discuss whether he might help Conor continue his burgeoning ring career as a pro after the Games.

Before that I caught up with him at a somewhat less auspicious gymnasium on an industrial estate in Telford, Shropshire, showing fellow military veterans how to help others defend themselves.

One-time Private Benn, veteran of many a skirmish in Northern Ireland, has been enlisted by British Military Martial Arts, an organisation run by ex-para Lee Matthews to spearhead a project which recruits ex-servicemen and women to be trained as martial arts instructors. When qualified they are encouraged to open their own fitness academies or gain employment in some of the 60-odd BMMA establishments throughout the UK, teaching kids and adults self-defence.

Matthews, six times a British martial arts champion who himself served in Ulster and Kosovo, explained: “Basically military people are all athletes and can be readily trained in sports like boxing, karate, kung fu, tae kwon do and ju-jitsu – virtually any martial art. The academies are run on military lines, with kit inspections and emphasis on discipline. When jobs are so scarce it is a good means of employment for ex-service personnel, as this is a burgeoning area. We see Nigel as the ideal ambassador.”

According to Benn: “This project is right up the old squaddies’ street. So many come out wondering what they can do with themselves. They’ve got so much left in them, but can’t get to grips with civilian life. This gives them something to burn up that energy and use their combat knowledge.”

Although he became one of Britain’s finest gloved gladiators, Benn was also a martial artist in his youth. “I did a bit of everything, and I was never beaten,” he says. “I was into Bruce Lee, mate. Oh yeah! I love my combat sports. But there was no money in them then, which is why I took up boxing in the Army. For me, it was the Army or prison. I wanted to make something of myself. The Army gave me that determination, the will to win.”

The two fights with Eubank in the early Nineties (Benn was unexpectedly battered in the first in Birmingham and they drew the epic second before a 42,000 crowd at Old Trafford which Eubank now admits Benn probably won) were the stuff of sporting legend, collisions of will and ego as bitter and intense as any in fistic history, the climax of years of animosity and jealousy between the two best middleweights in the world.

Does he still detest Eubank? “Nah. I say ‘thank you, Chris, you made me very wealthy’. How can I hate the man?” 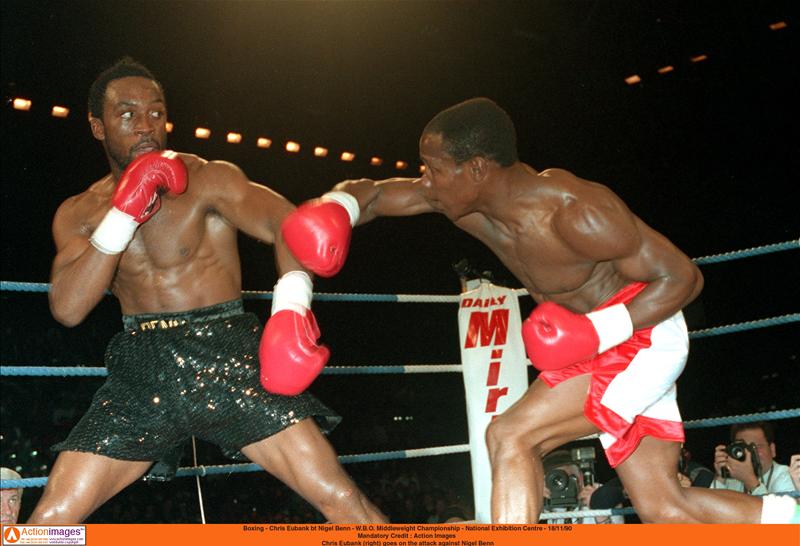 At the time the antagonism was real, but subsequently they have embraced, as indeed have Benn and the American Gerald McClellan, left paralysed, half-blind and embittered following their fight 16 years ago.

More importantly, says Benn, he has embraced God, regularly preaching at an Evangelical church in Majorca, where he lived before emigrating to Australia a couple of years ago, bringing serenity to a soul once in torment.

“Before I became a Christian I didn’t care, about anything, even boxing. I was living a life full of hurt anyway,” he told me. ”Boxing wasn’t taking me to the darkest places in my life. No. The fights were the easy part because it took my mind away from self-destruction. When I came out of the ring I had to deal with the real world. Fighting was my escape.”

He has been devoted to God since he tried to end it all late one night ten years ago on Streatham Common in south London where he sat sobbing in his car. He had his money and his health, but he wondered why he could not stop hurting those who loved him. There had been so many affairs, orgies, lies, drugs and booze. He swallowed a fistful of sleeping tablets, swigged from a bottle of wine and waited for death but perversely it escaped him. He made it home to his wife Carolyne and fell into a heavy sleep. Two days later, he emerged, chastened and determined to change.

“I burned the candle at both ends. The women, the sex, the drugs, the drink, everything that goes with it. It catches up on you. You’ve got to understand I’d lived a life full of sin and gangsters, all that stuff.

“I didn’t want no part of it any more. It was affecting my wife, my family, my mum and dad. I got caught up in that world and it’s only now that I fully understand what I was going through. Now I enjoy my life with Jesus. If I can help someone get off the drugs or the drink, repair their marriage, it’s a blessing. I went through all the drug and sex addiction, so I understand.” 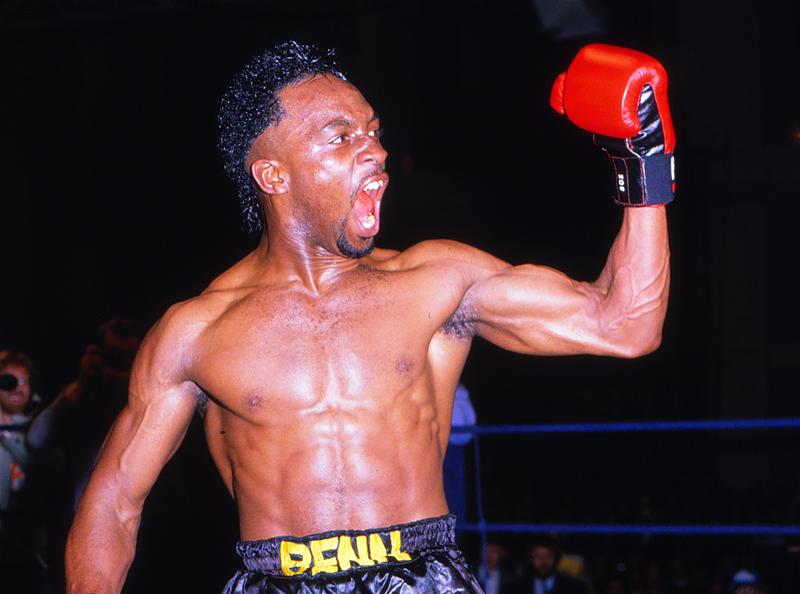 He used to do a spot of DJ-ing but not anymore. “Don’t be silly! How can I go, ‘Praise God’ and then go off to the nightclub where it’s like Sodom and Gomorrah?

“Now I’m 51, I’ve got eight kids, some of them out of wedlock, and I’m a granddad. I’m not chasing nothin’ no more. My Porsche has gone, my Cadillac’s gone, I’ve got rid of everything but what I have is contentment.

“It’s only through Jesus that I’m still happily married to Carolyne [his second wife to whom he famously proposed in the boxing ring after a fight in Newcastle]. If it wasn’t for her, I guarantee you I’d be six foot under or in a mental hospital.

“I’d hurt the woman I loved dearly. What I had to confess to Carolyne, well, if you ever saw a black man turn white, that was me. Now any lie is something I could not live with.

“I was one of the biggest sinners. I was Satan’s right-hand man before God said he wanted me. He said ‘I have plans for you.’ And I asked ‘Why me Lord? I’m not a member of any church.’ But he said he wanted the ‘Dark Destroyer’. He knew that people would sit up and listen to me.”

Born in 1964 in Ilford in East London to immigrant parents from Barbados, Benn was brought up in Essex before moving to Spain and then settling in Australia. “Tell you the truth my wife Carolyne suggested it,” he says. “I said to her ‘Australia? You must be mad, everything’s venomous’. Then I worked through it. We black men don’t surf so that ruled out sharks.”

Eventually, he was convinced. His first day in Sydney had a huge impact. He remembers ordering fried rice in English from a Chinese waiter. “I thought, ‘Here we are!’” he says. “I fell in love with it all – the size of the beaches, the big blue sky, the barbecues and focus on families getting together.”

He now spends his time working for charities and schooling young boxers. at a multi-cultural club for the disadvantaged. ”My new drug is serving people whether through boxing or in my role as a volunteer assisting people with their marriages or helping those less fortunate.”

He adds:”Boxing has helped millions around the world as a trigger for self-belief, identity and connecting. It is therapy for rage.”

Benn was among the most courageous fighting men ever weaned in the British ring. “You know what gave me that courage? Being in the Army. Three years in Germany and 18 months in Northern Ireland. Proper Army training taught me to be second to none. It was as always my rule in everything. When I was out on patrol, and it was sleeting, the rain bouncing off my chest. I thought ‘I’m a warrior. This is me’.”

How splendidly ironic then, that the man o’war has finally found peace. 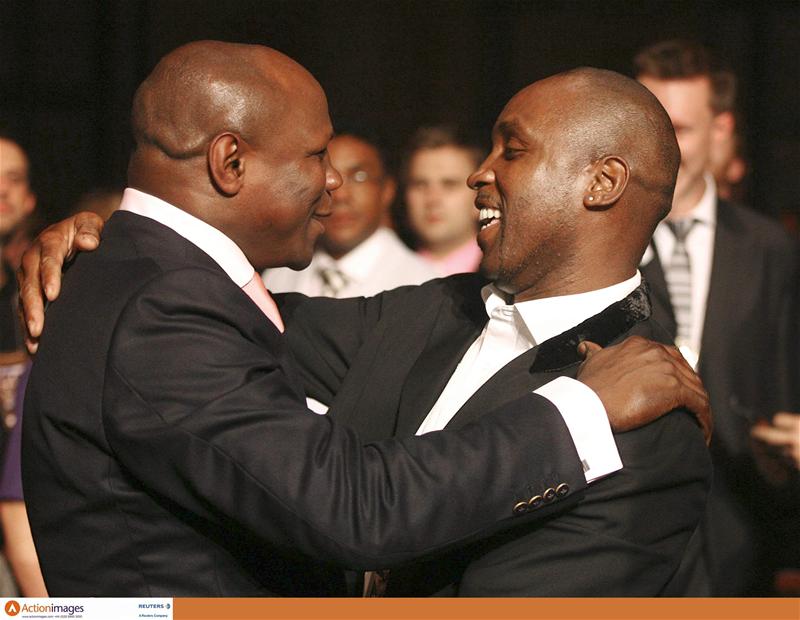