Back in the Eighties, Mills Lane, a US District Attorney who was boxing’s best-known referee, famously issued his final command to the combatants as they touched gloves: “Let’s get it on!” And in those days they invariably did. Unfortunately, they don’t always seem to any more.

This exasperates a great fighter who always got it on: Marvelous Marvin Hagler.

“What’s up with these guys?” asks the shaven-headed southpaw slayer of ring reputations, one of boxing’s legendary world middleweight champions. “Have they no pride? Today’s fighters are not as hungry as they used to be. They don’t seem to sacrifice as much as we did. Everybody’s looking for that easy street and there ain’t no easy street. When we fought, it was straightforward, you fought everybody, no ducking, no playing games. You fought the best, and it made you feel good.

“The only question that we had afterwards was: ‘Who’s next?’ The trouble now is that too many fighters seem to want to get out of the game before they get hit too hard.

“You look at some of these guys and they’ve had only, what, 12 fights? And they are fighting for a title and if they lose that, they can go fight for another title. I call them pretenders, not contenders. They are an embarrassment to real champions like Ali, Frazier and the guys I fought.”

Hagler came from the same boxing backyard in Brockton, Massachusetts, as Rocky Marciano and for a golden spell three decades ago he, Tommy Hearns and Sugar Ray Leonard were boxing’s holy trinity. Toss Roberto Duran into the mix and between them they fought each other nine times. 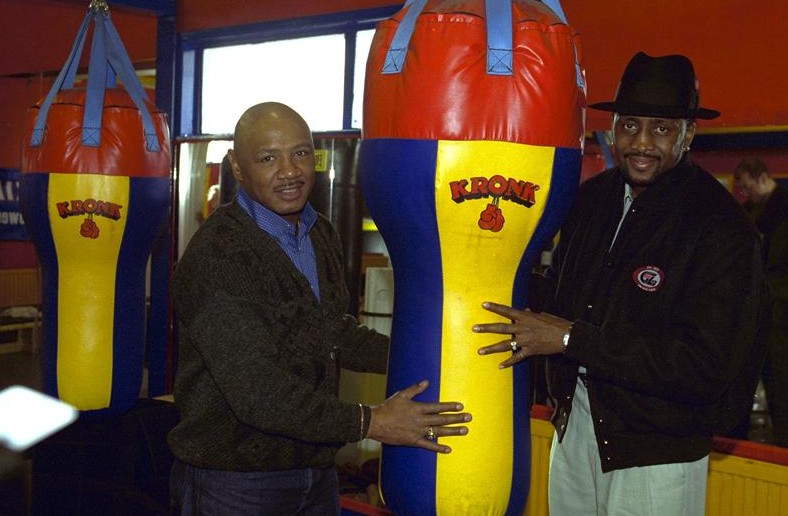 Marvin Hagler and Tommy Hearns opening the Kronk Gym, Kentish Town 2001
If there is one fight I could watch over and over again- apart from ‘The Thrilla in Manila’ – it would be Hagler-Hearns.

Their brutal and bloody collision at Caesars Palace Las Vegas on 15 April 1985 lasted a mere eight minutes but it stunned the boxing world with its undiluted savagery.

It is said that the first blistering round was the fiercest ever seen. Boxing Bible magazine The Ring called it “the greatest round in boxing history”.

Both slammed sickening punches to the other’s head, leaving Hagler with blood pumping out of a deep gash.

Hagler emerged from that early skirmish looking as if someone had ripped at his face with a can opener. At the end of the round the referee Richard Steele, alarmed at the amount of claret cascading down Hagler’s face, asked him, “Can you see?” Hagler snapped back: “Well, I ain’t missing him, am I?”

Just under two rounds later, Steele had to rescue Hearns from being knocked out – or worse.

In the third, immediately after the ringside medic had given Hagler a reprieve, the champion chased after Hearns, catching him with a powerful left and then a right that spun Hearns around and made him stagger back defenceless. Hagler followed him across the ring and landed two more long, solid rights.

Hearns went down and lay unmoving on his back seemingly unconscious, but somehow he staggered to his feet by the count of nine. But his eyes were crossed and his legs were rubbery, and the referee rightly stopped it.

At the weigh-in, Hagler, who had been the undisputed middleweight champion since September 1980, had warned Hearns “You better hope I don’t bleed, it only makes me meaner.”

When I caught up with Marvelous Marvin at a Laureus Awards function recently he recalled: “That fight may have been 30 years ago but I can still feel those punches he landed on me and I drink a toast to him every time we meet. I am grateful people remember it as one of the all-time great fights. It was definitely the highlight of my career.

“Every time I see it, I still get chills up and down my spine. When I look at it, I’m glad it’s over. It was war.”

Britain’s best-ever referee, the late Harry Gibbs, was one of the three judges and although scorecards were redundant both he and Herb Santos, from Reno, had Hagler up 20-18 after the two completed rounds, while the Californian Dick Young saw it for Hearns by the same margin.

Plenty of good judges had thought the gangling Hearns might have too much for Hagler. He stood 6ft 1in, unusually tall for a natural welterweight who had stopped 26 of 28 opponents at the poundage before moving up to middleweight.

His trainer, the late Manny Steward, said of him. “Tommy comes into the ring like a leopard, let loose to feed.” But the shaven-headed Hagler was the hungrier beast on that unforgettable night.

Hearns had been beaten only once, when he ran out of gas against Leonard in 1981 and was stopped in the 14th round. Either side of that epic bout, Hearns had knocked out 34 of 40 opponents, most of them with his vaunted right hand.

Furthermore, Hearns had rendered Panamanian great Roberto ‘Hands of Stone’ Duran unconscious with one punch the previous year. Duran was seen as a yardstick, because in his previous fight he had taken Hagler the full 15-round distance.

“I respected Tommy’s right hand but we wanted him to throw it,” says Hagler. “Because after he’d thrown a few and I ate them up, he started thinking: ‘Man, this guy ain’t even backing up.’ And I’m thinking: ‘Now you belong to me.'”

Amid the cacophony, Hagler says he could hear nobody, except his mum. “In a fight like that, you’re not aware of anyone, not even the referee. But I could hear my mother saying: ‘Hit him, baby! Hit him!’ You know how mothers are.” 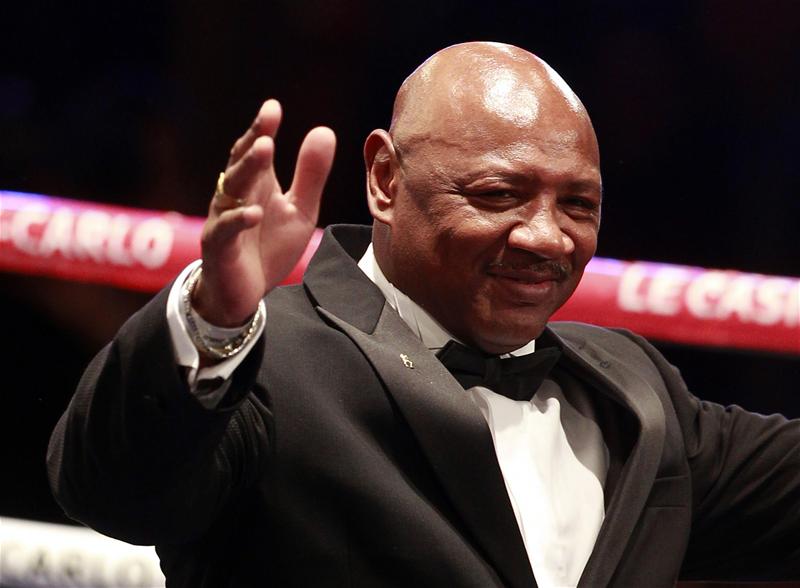 That was Hagler’s 65th fight and the 11th defence of the title he won from Britain’s Alan Minter in 1980 amid a deeply unsavoury scenario involving racism.

Minter had made a stupid pre-fight comment which would probably see him banned today. “There’s no way I am going to lose my title to a black man,” he vowed. A furious Hagler demolished him in three rounds, causing a riot outside the ring with bottles and glasses being thrown and Hagler being hustled to the Wembley dressing room by police.

He quit two years and two fights after beating Hearns, controversially losing a split decision to Leonard. He remains bitter that Leonard refused a rematch. Now 61, he is less than a stone over the 11st 6lb middleweight limit. He grins: “I keep my weight down just in case Leonard ever decides to give me that return.”

These days he lives in Milan after falling in love with Italy and in particular with an Italian lady Kay who was to become his second wife (he has five children from a previous marriage). He now works on behalf of the Laureus Sport for Good Foundation, “trying to give something back to sport which gave so much to me”. He has also appeared in four action movies.

“I’ve been retired 27 years but people still talk about my fights as if they were yesterday,” he says. “Who knows anything about most of today’s fighters? An old lady came once up to me not so long ago asked: ‘Is Mike Tyson still the heavyweight champion?’ If I told her it was Wladimir Klitschko or Deontay Wilder she’d have said: ‘Who are they?'”

Of course he acknowledges she may have heard of Floyd Mayweather Jnr. But Hagler is no great fan of the Money Man’s fighting style or lifestyle, particularly the way he flashes the cash.

Mayweather has been repeatedly pictured alongside stacks of hundred dollar bills and regularly posts photographs to social media of his numerous cars and jets. “There is no class there and it is really no way for a champion to act,” sniffs Hagler.

“If you have the skills you don’t need to impress everybody by being a show-off.”

Before Mayweather finally got it on with Manny Pacquiao, Hagler had correctly predicted the ‘fight of the century’ would bore the pants off the punters. “Mayweather can put you to sleep. The way he boxes and moves brings no excitement to the game.” Unlike the way Hagler and Hearns did.

Marvin Nathaniel Hagler changed his name legally to Marvelous Marvin in 1986, insisting on the singular spelling of the soubriquet. No doubt because he always was one L of a fighter.