After a blueprint 19 fight apprenticeship, the time has finally come to start beating the drum for 21 year old Hughie Fury, the less gregarious but seemingly equally gifted younger cousin of the lineal heavyweight champion of the world. 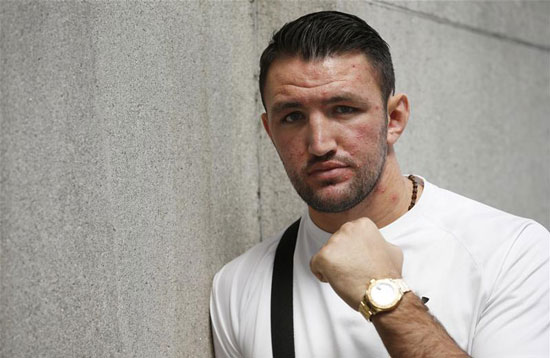 This Saturday at the Copper Box Arena in London’s Olympic Park, the 6ft 6in one time World Youth champion – newly signed to promoter Frank Warren – tops the bill and enters the championship ring for the first time to challenge for the vacant WBO International title. BoxNation screen live.

Opponent ‘Big Fred’ Kassi from New Orleans by way of the Cameroon has lost just four of 23 in decent company. Why is he the right test for you at this stage?

Kassi is a very experienced, naturally awkward pro who’s hard to hit clean because he keeps switching. I thought he beat both (two time world title challenger Chris) Arreola and (unbeaten 2012 US Olympian) Dominic Brezaeale so he’s even better than his record suggests.

I accept the fights no one else takes and I’m really looking forward to it. He could make me look bad but it’s an essential part of my learning to encounter and conquer the problems that he will pose, if I’m to realise my ambition of not just winning a world title but retaining it for a very long time.

I’m just happy to receive my first title opportunity and hopefully victory will see me crash the world ratings for the first time. I was actually due to fight for the WBC International belt in my last fight but there was a pull out.

In 2012, you made history as the first English heavyweight to win the World Youth title. With the Rio Olympics pending, any regrets about vaulting to the pros straight after?

Winning the World Youths was a big achievement and if I’d stayed amateur, I’d definitely have won the Rio Olympics. But I just wanted to turn pro and learn the job. After Saturday, I should break the world ratings. Definitely no regrets.

Assuming you come through on Saturday evening, what are your goals for the remainder of 2016?

I want as many fights as possible, against the very best opposition they can get so I can properly learn the job. It’s all about getting me the right fights.

I train full time anyway. For me, boxing is more a life style than a series of training camps. Training can be torture but you just grit your teeth. I seldom take more than two days off from the gym between fights. I want to be fighting as regularly as I possibly can. It’s what you need to do to be the best.

Frank (Warren) can deliver those fights, get me exposure in main events on major shows and move me forward.

The British and Commonwealth titles have recently become vacant following Anthony Joshua’s accession to the IBF title. Do those belts interest you?

I think I’m already past British title level. But I’ll accept any fights that keep me busy so if shots at the British, Commonwealth or even European title were offered I’d not say ‘No’. I want hard learning fights, titles are a bonus.

Dillian Whyte is a good friend of the family so we don’t need to take that but I’ll fight any of the others, Chisora, David Price….whoever. Dereck (Chisora) fights (Kubrat) Pulev for the vacant European title the week after my fight. I definitely feel I’m ready for the winner of that.

That said, I never allow myself to get too hyped up about the opponent until I actually see them facing me in the ring. I’ve become cynical due to all the pull outs.

Accepting that a challenge to your cousin for the WBA and WBO belts is unrealistic, how far are you away from being ready to challenge Joshua for his IBF title or Deontay Wilder for the WBC strap? I understand you rejected an offer to meet the American at short-notice recently.

Wilder’s people offered us something like a week but we don’t play stupid games. For me, it’s never been about a payday, it’s about becoming a long reigning heavyweight champion of the world. We told them that we’d happily fight him if they gave us a full camp but they’ve not got back in touch.

Joshua took his opportunity in style – good luck to him – but Charles Martin weren’t a worthy champion, just came for a payday. How can you respect a ‘fighter’ who smiles after he’s just lost his world heavyweight title?! I’m definitely ready for Joshua now. He’s not true world stage.

I’ve got greater seasoning. I’ve boxed three more fights and (53) more rounds. I’ve been 10 hard rounds three times against good men. He’s not been past seven. In my view (Andriy) Rudenko beat Lucas Browne so he was really undefeated (in 25) yet I beat him easy.

On top of that, people need to realise that, from a very young age, I’ve been blessed with some of the best sparring in the world, all the top Yanks and Eastern Europeans. When they came to spar Tyson, they sparred me. And none of them managed to wobble me, buzz me, leave me watching flashing lights. Let’s hope it stays that way.

Sparring is very different from fighting but it’s still the closest thing. That’s definitely prepared me.

You seem a very chilled and amicable character outside the ropes. How do you explain this desire to hit and risky getting hit?

It must partly be a Fury family tradition. We’re born fighting men and I’ve been dying to fight since a very young age. We want to prove we’re the best. I guess it’s in our genes.

I want to achieve things and prove people wrong. That’s really what motivates me. I put all my guts into training so defeats never happen. That way, if you lose, you know you’ve only got yourself to blame.

Now fighting comes naturally, I’m really relaxed in the ring and never really get nervous beforehand. Tyson might be different but, with me, there’s no fire raging inside.

Six of your last 10 fights have gone to points. Is there a need to focus on improving your power if you’re to flourish at the very highest level within the heavyweight division?

Trust me, EVERY heavyweight can hit and I know there’s power there. I just need to step in more and improve my technique. The fighters I’m facing now aren’t just tough and durable, they’re also very negative. Once I fight opponents with ambition to match mine, you’ll start seeing the kayos.

Now that you’re topping bills and starring on BoxNation, is there greater pressure to deliver excitement for the fans rather than just quietly master your craft?

Saturday I’ll look to put on a true professional performance, execute what I’ve been preparing in the gym rather than chase a knockout. If it comes it comes but I’ll not take stupid chances.

I know I’m on the right track and I know what qualities I need to develop. A load of ‘knockover’ jobs count for nothing. George Foreman had knocked every opponent out but it was Ali’s skills that won the day when they met for the heavyweight title.

I’m going to put on a show and the fans and viewers will experience true boxing class. The hard work’s done and I’m ready to rumble.