HYUSEINOV IS NEXT STOP FOR INDIAN EXPRESS SINGH

Indian superstar Vijender Singh steps up in experience when he takes on Samet Hyuseinov on December 19 at the Manchester Arena. 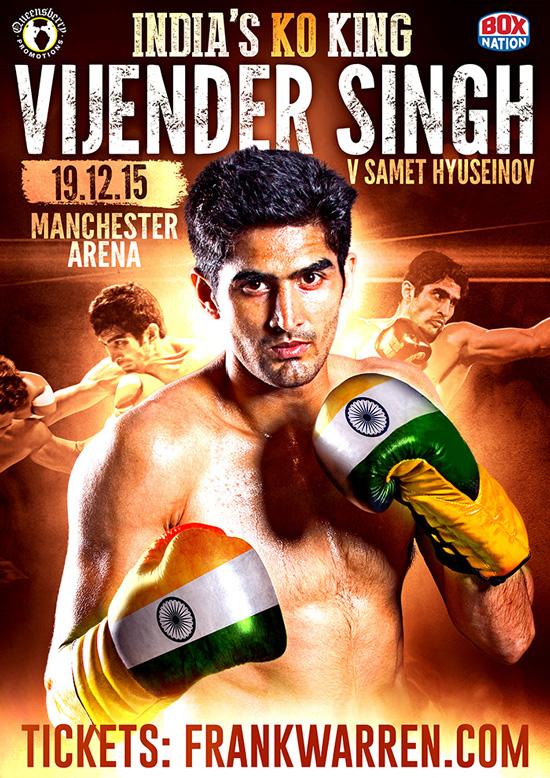 Unbeaten Singh has steamed through his first two professional opponents, beating Sonny Whiting in his debut in October and followed that up with a one round demolition of Dean Gillen in Dublin last month.

The 30-year-old hot-shot now takes on Bulgaria’s experienced Hyuseinov for his third pro fight as he continues on his quest to become India’s first ever professional world champion and end the year undefeated.

Whereas Whiting and Gillen had a combined record of five fights, Hyuseinov has 14 fights under his belt, winning seven fights and losing seven, with a total of 68 rounds and extending a number of prospects the distance.

“This is another important fight for me that I must win so the pressure is on,” Said Singh.

“I’m unbeaten and intend to stay that way going into next year where I am looking at my first title fight so I’m not letting Hyuseinov mess up my plans to get my first championship belt,”

“While I got rid of Whiting and Gillen early, I’ll have to see what Hyuseinov brings to the ring on the night.  If I feel that I can take him out early I will go in for the early knockout and get the job done nice and quick,”

“He’s very experienced though and with 14 fights and 68 rounds he’s got the advantage over me in that department.  It’s a step up for me though and if I can deal with him before the end of the four rounds then I know that I’m improving.”

However, bolshy Hyuseinov has threatened to stop the Indian Express in his tracks and inflict the first loss on his record.

“Singh has never, never met anyone like me and he will realise what it is like with a real professional on the 19th December,”

“How can he look to fight for titles next year when he’s only had two fights and four rounds?  He thinks that I’m some fool he’s going to just knock over easily,”

“I will take great delight in handing Singh his first loss and sending him back home to India beaten and broken. In fact I will tell you what I will do to him, I will smash him to the body to loosen him up and then a right hand to knock him out, just watch me.”

The Channel Of Champion will televise live and exclusive on Sky 437/HD 490, Virgin 546 and Talk Talk 415.  Subscribe at www.boxnation.com  Or watch online at Livesport.tv and via iPhone, iPad or Android.