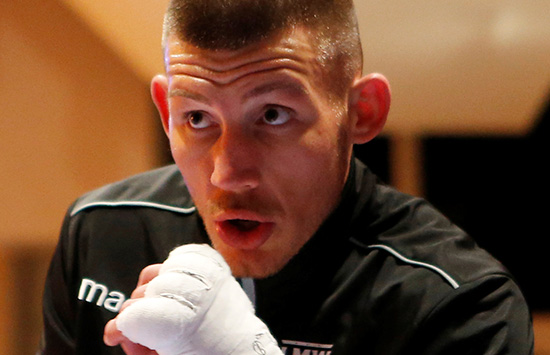 Liam Williams returns to the ring this weekend in Cardiff for an eight round comeback contest following two gruelling encounters with Liam Smith in 2017. The 25-year-old is determined to make a speedy return to the top table once he is back in the swing of things, as he explains in his latest Fighter Diary…

YOU COULD SAY that going into my fight on Saturday feels like I am getting ready to jump back on the horse after my two fights against Liam Smith.

To be honest, I am quite excited about getting back in and with it being in Wales as well. It doesn’t matter who I am fighting (Anatoli Hunanyan from the Czech Republic), it is just nice to get back active after a couple of months.

It is actually nice to be fighting with not too much pressure on my shoulders, to come back without the spotlight of the media. I am going to get a good win here and then get back in those good fights.

Hopefully everyone will start talking about me again after this fight.

I have got the fact that I have two defeats on my record out of my system now. Somebody asked me the other day how I felt with not being unbeaten anymore and I said that I don’t carry that fear of suffering my first loss any longer.

I also honestly do feel that I took a lot away from those fights and it will only help me in the long run. I have lost but I have also learned and I am only going to move forward now.

In the long run taking a loss really doesn’t matter because in a couple of fights time, being 18-2 instead of 20-0 isn’t going to deny me being in big fights.

It would be nice to still have an unbeaten record, don’t get me wrong, but there are a lot of people out there who have proved over and over again that a couple of losses means absolutely nothing.

This fight on Saturday is simply about blowing away the cobwebs for me, I am just looking to get back active, but I don’t just want to get the win, I want to do it in a good fashion.

I have had a good break – which has done me good after back-to-back big fights – and I do feel rejuvenated now. I am training a lot better and my sparring has been sharper.

The plan of action now is to come through this fight with hopefully no injuries then personally I would like to fight for the European title, but if any better offers crop up then obviously I am well up for it.

The way things stand at the moment I no longer hold the British title, while I am first in line to face the next champion. But, I don’t really have too much interest in it and that is just me being brutally honest.

There are a number of genuine contenders at British level at the moment and I am always up for a challenge and willing to take fights that are tricky. I do, however, feel that I am probably just past that level now, but I would take them if the circumstances were 100 per cent right.

I would be confident against any of them, but I do feel like I should be in bigger fights now. It is the sort of thing Liam Smith used to say about the likes of me and I used to slag him off, but now I see where he was coming from.

I am not being disrespectful to anybody, it is just my honest opinion and how I feel.