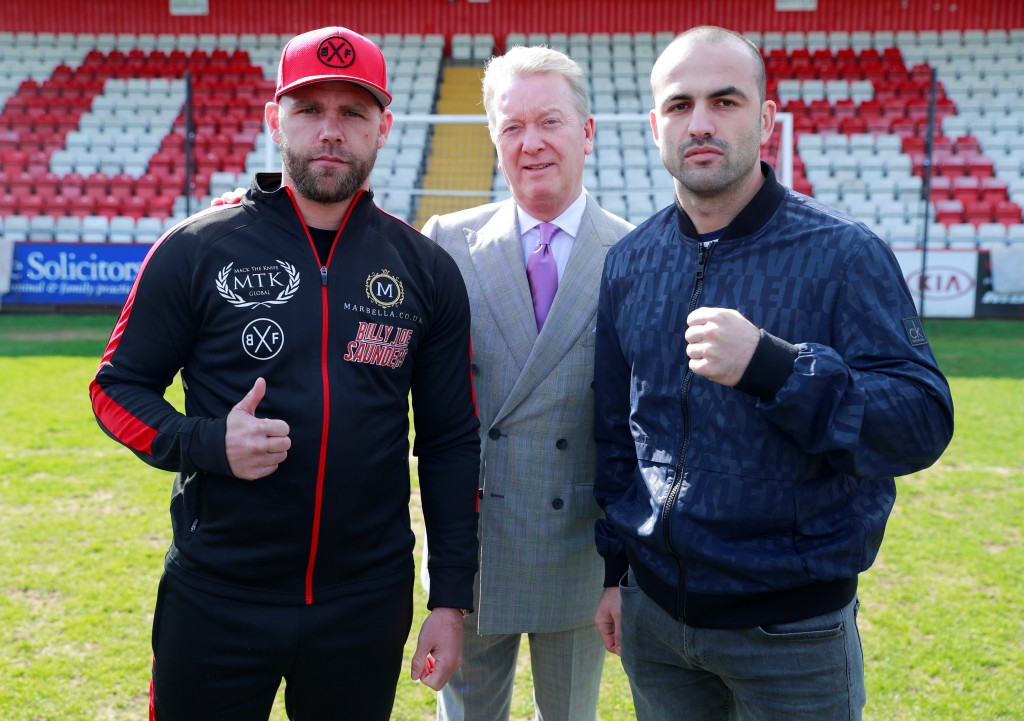 BILLY JOE SAUNDERS came face-to-face with Shefat Isufi who he meets for the WBO interim super-middleweight world title at the Lamex Stadium, home of Stevenage FC on Saturday May 18, live on BT Sport

Saunders (27-0) will be closing in on becoming a two-weight world champion after his unbeaten reign as WBO middleweight champion when he faces Isufi on Frank Warren’s ‘King Of Herts’ bill at the Hertfordshire stadium close to his Hatfield home.

Munich based Albanian Isufi (27-3-2) is on a ten fight winning streak, the current WBO intercontinental champion and the number one contender for the WBO title, held by Mexican Gilberto Ramirez.

Here are a selection of quotes from their press conference at the venue today:

“We were stuck with no London venue available in May, so we decided to think outside the box and go local to Bill, and bring the fight to Stevenage FC. It’s a good facility which will have a 10-12,000 capacity for boxing. ”

“We tried to make the Chris Eubank Jr rematch and they didn’t want to know, they don’t want Eubank to fight Billy Joe Saunders under any circumstances.”

“The champion Gilberto Ramirez called the WBO and said he would vacate and they put the fight out to Billy and Isufu and we agreed terms, but Ramirez then said he hadn’t decided so this is now interim title. I believe Ramirez could vacate and the winner will be declared full champion.”

“Billy has been very avoided. We signed twice to fight Golovkin and Canelo doesn’t want to fight him.”

“This is a good homecoming, but a bit of pressure because I have never boxed so close to home. I’ve got to make sure I’m on my game because Isufi is looking to take my head off. My mind has got to be focused and set new challenges.”

“I love the Ingle gym and loved working with Dominic Ingle and there are no hard feelings – he may even be in the corner with Ben. There is unfinished business in me and people haven’t seen the best.”

“I have never been more determined and I have a lot to prove this year. I had a terrible 2018 inside and outside the ring and I know I have to be on top flight for Isufi.”

“I am open to boxing at super-middleweight and middleweight. I’ve not got miles on the clock, in my 27 fights I have taken ten hard punches and I am just coming into my prime. I believe I am the best middleweight and super-middleweight in the world bar none. I want to get noticed at 168lb. I would definitely fancy a fight against Callum Smith. I mentioned it to Frank before that it would be a good fight to make. He is great fighter and the type I want to test myself against. It would be hard to say, ‘No’ to that fight.”

“I’ve always worked with Billy Joe on the technical side. We carried on doing some sessions together and a few weeks ago Billy gave me the call and I was more than happy to accept.”

“When Tyson Fury was in a bad position Billy put us together and we’re there to help each other. Billy and Tyson make a good little team. Tyson’s wife always tells me how much Billy was in touch encouraging him to get back in the gym when he was struggling.”

“Billy should leave this sport knowing he one of the best British fighters ever. Isufi is a stern test, but Billy will produce the goods.”

“Billy can have a million people cheering him on, there’s only going to be two of us in that ring on fight night. I will give Billy Joe a very tough night.”

“Billy is very good fighter, very fast and quick and a good puncher but I am very confident I will give him a tough time.”

“I promised my father on his death bed that I would be a world champion and this is my chance.”