“I JUST BUCKLE DOWN AND GET ON WITH IT” 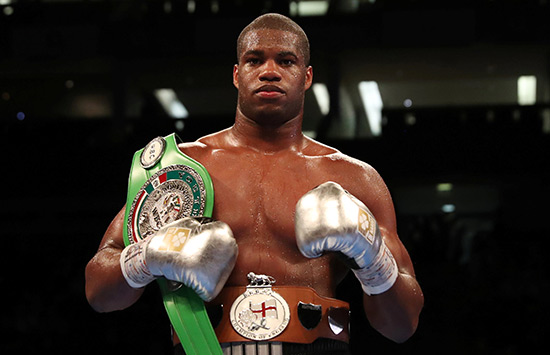 Daniel Dubois added a third belt to his growing collection in June when he won the English heavyweight title by stopping the comically provocative Tom Little in the fifth round at the 02 Arena. A well-seasoned and equally talkative American in the shape of Kevin ‘Kingpin’ Johnson is next in line for Daniel at the Leicester Arena on October 6 and, in his latest Fighter Diary, Daniel looks back on Little and ahead to his next challenge, while also responding to an assessment of his heavyweight standing from domestic rival Nathan Gorman…

MY LAST FIGHT, after all the talk, went almost exactly as I expected. When you are living the life and training hard, things basically go to plan really.

Tom Little believed he had the tools and a plan to beat me, but everyone has a plan until they get hit, with Mike Tyson’s words again proving to be reality. What went on beforehand was all talk and it didn’t mean nothing.

Whatever he convinced himself of before the fight started, when the bell rings it gets real. He did get me to bite a little bit at the press conference and that didn’t really surprise me. I just said what I said and the reason was it was fight week and maybe I was just in the mood for fighting.

Perhaps I did overreact when I shouldn’t of, but it was a learning experience and I’ll move on from that. It doesn’t matter though because it is boxing at the end of the day.

It was new for me going in with a little bit of needle going on, but at the end of it for me, a fight is a fight. I approach it as a fight, I prepare very hard and because I work so hard I am always in perpetual motion and ready for the next one.

That is how I live day to day.

Me climbing into the ring and giving Tom the eye straight away wasn’t so much a planned thing, but I have done it before as an amateur and it worked for me then. I think it reinforced the upper hand I already had before we got into the ring because at the press conference too I was above him.

What happened on the night was already written.

In the fight itself I was happy enough with how I performed in there but you can always do better. That is how I always reflect on it after looking back on the tapes and studying it.

There were some things I should have done better and used my attributes to greater effect. I was pleased with the result though and how it went.

No sooner a fight is done with – particularly in the heavyweights – one of your rivals always tends to pipe up and have a few things to say.

This time for me was Nathan Gorman offering up an assessment and telling everyone that he would beat me.

What I make of it is that everyone is allowed to have their own opinion, of course. It is what he thinks but I know I have got what it takes to beat him most of the other fighters around at my level, internationally and domestically.

When the time comes we will prove it, but right now I am just biding my time and taking it one fight at a time.

Nathan appears to believe he is some sort of authority on my abilities from when we sparred together as amateurs. I don’t remember him ever enjoying the upper hand that would give him such confidence, but he has got to believe in himself.

If coming out with things is how he gets his belief then so be it, but I know I am better than him. It is just really about progression for me and taking each fight as it comes.

When the time is right we will meet and it is all about timing in boxing.

I am now working towards my next fight against Kevin Johnson in October and he is a man of huge experience. From what I know about him from when he came over and fought Anthony Joshua, like Tom Little, he will not be short of a few words to say in the build-up.

I am more than ready for that, definitely – and I can’t wait. He has talked the talk before fights many times and he has been around a long time too and had a lot of fights.

He has fought the likes of AJ, Vitali Klitschko and Fury so it will be a great experience for me against someone with big credentials. It will be a second opponent that I have shared with AJ, although we are far apart in terms of experience at the time of meeting them.

I am still young and improving every day, but I believe I can progress further than he has. I just need to buckle down and get on with it.