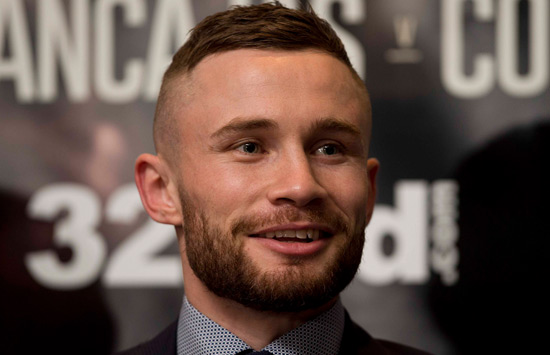 When Andres Gutierrez took a painful tumble in the shower just hours after he himself fell foul of the scales, it is little wonder Carl Frampton began to wonder if it was time for a change of direction in his career. Now, with a new team onboard, The Jackal returns to his home city of Belfast on Saturday to take on Horacio Garcia and he takes up the story in the next of his exclusive Fighter Diaries

THIS IS A decision I made to make the changes and I spoke to the people closest to me. It is a decision I believe will benefit my career.

With all the choices, the link with MTK, Frank and BT lead me to believe I am in a better spot now.

I also believe there is a lot more to come from me and you are going to see some big performances and some big wins.

My opponent on Saturday at the SSE Arena, Horacio Garcia, has got a lot about him. He can fight, he can punch. In his three losses he has not been stopped and he’s got a high knockout ratio when he wins.

So I will need to be switched on. I still believe that, on my day when I am performing, I can beat any featherweight in the world and I think I proved that when I beat Leo Santa Cruz last year.

Even when I wasn’t at the races and he beat me at the beginning of this year, it was still a reasonably close fight, but he deserved the win.

I didn’t perform and I think when I do perform I can beat anyone. This will not be an easy fight against Garcia and I will need to be switched on from start to finish, but if I am on it, I will be looking to do a good job on him.

The show is not all about me on Saturday as it is an unreal card and I have said a few times that this is probably the best card that Ireland has ever seen.

If you look at it and then take me out of the equation, you’ve got Jamie Conlan, who is always in exciting fights, having his first world title attempt.

You’ve got Zolani Tete as well, who is an unbelievable fighter, and if you don’t know about him, make sure you are in to see him because he is quality.

Then you’ve got Paddy Barnes, who everyone loves, fighting for his WBO European title. After that you have got all the prospects as well and one to keep an eye on in particular is Lewis Crocker – he can punch!

From top to bottom it is a fantastic bill.

For me it is about paving the road towards Windsor Park in the summer.

I spoke to Frank about that and, to be honest, when I was speaking to everyone, I needed them to guarantee me Windsor Park.

That is going to be a dream come true for me and it will be an absolutely huge night. But it is up to me to get a couple of wins in the meantime and look good while doing it.

It would be great to be either defending a world title at Windsor Park – because I would like to fight in around March or April – if I get the opportunity to fight for one in my next fight.

Or potentially fighting one of the big boys and taking their title off them, that would be a dream for me. I’ve already got me eyes looking at next summer.

The plot has now thickened with the addition of Lee Selby to the promotional mix.

It is great that he has come along and I think him and Josh Warrington are probably going to fight in March-April. I would be happy to fight the winner of that one.

If I could get a fight with one of those two in the summer, while maybe having picked up a title myself, that would be huge.

It just makes it all the more exciting, I think Lee is a terrific fighter but, again, I think I could beat any featherweight on my day.