I’M THE MAN TO TOPPLE DDD 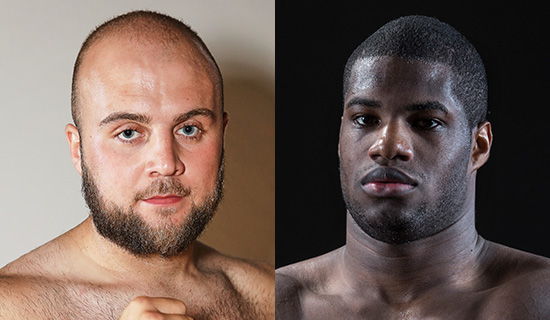 NATHAN GORMAN INSISTS he is the man with a plan to dampen dynamite and inflict a first professional defeat on Daniel Dubois.

The relatively brand new heavies appear to be on an eventual collision course following their explosive exploits in the ring since turning professional.

Gorman has the edge on experience, with him clocking up 13 wins – 11 via KO – since making his debut in December 2015. The Nantwich man has gathered two belts since departing the amateur code and the Team GB squad, winning the Central Area title in his sixth fight and the WBC Silver International title in his 11th.

Dubois, meanwhile, has scored eight victories via KO since also leaving the Team GB squad and turning professional in April 2017. His eight contests have spanned just 17 rounds and in that time he has collected the WBC Youth world title, the Southern Area title and, last time out against Tom Little, the English title.

It all points to an inevitable match-up at some point down the line when there is a bit more than bragging rights at stake and Gorman reckon that, while Dubois did the business against a dangerous opponent in Little, he spotted weaknesses that he is equipped to capitalise on.

“He did what he had to do against Tom and did five rounds but, for me, I see chinks in his armour and I still say I am the one to beat him,” said the 22-year-old of the 20-year-old Dubois.

“He’s got good distance, Dubois has, but it is something he’s always had – and a good jab. I’m not going to come on and slate him or nothing, he is a talented lad, such as I am.

“But, like I said before, there are chinks in his armour that I can exploit.”

Gorman himself posted a statement with his last performance against the previously not-stopped Dubliner Sean Turner.

Turner came into the fight off the back of extending Croatian Olympian Filip Hrgovic the full eight rounds, but he was unable to repel the varied attacks of Gorman and was rescued by referee John Latham just over a minute into the third round.

It was an impressive night’s work by Gorman against an opponent who, like Little against Dubois, came into the fight fancying his chances of causing an upset.

“I’ve watched it back two or three times and it was a good win against a good, credible opponent in Sean Turner. It went perfect for me that night and, as I’ve said many times, if I do what I am doing in the gym, I’ll be flying. And I did.”

While Gorman is confidently climbing the ladder, he firmly believes there is one man who will reach the top before him on his second journey to the heavyweight summit.

Working out of Ricky Hatton’s gym, Gorman has observed the second coming of Tyson Fury at close quarters and strongly tips the lineal champion to reclaim some lost property.

“Truthfully and honestly, from what I’ve seen, I think he can get those belts back with ease,” he stated, predicting success over both Anthony Joshua and Deontay Wilder.

“Yep, I think he can beat them comfortably.

“Nearly three years out of the ring, for a heavyweight, is a long time. To get back, losing eight or nine stone, is an achievement by itself.