IN IT FOR THE LONG HAUL WITH BT SPORT 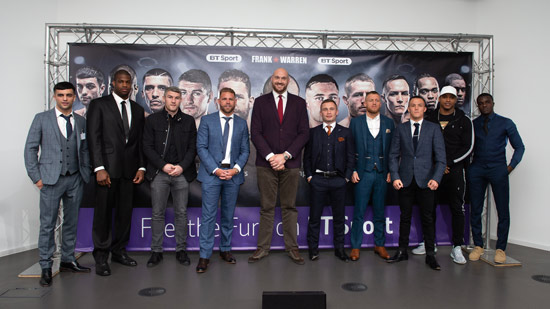 THE LONG-TERM just got longer as far as our, so far hugely successful, partnership with BT Sport is concerned and I was delighted to make public the extension of our agreement to stage boxing on behalf of such a major and progressive broadcaster.

We all convened within the stunning setting of the BT Tower on Tuesday to reveal the latest developments – including news of BT Sport Box Office soon coming into play – and even with just a selection of our stable in attendance, it reinforced the depth of quality we possess that we will be further showcasing over the coming months and years.

Names such as Billy Joe Saunders, Terry Flanagan, Liam Smith, Carl Frampton, Josh Warrington, Jack Catterall, Ohara Davies and, of course, the big man himself, Tyson Fury, were on hand to meet the media. Truth be told, we could have packed the place out with our champions, contenders and young prospects starting out, who we believe have a big future ahead of them.

The BT Tower may be tall, but seating space is at a premium in the auditorium and we simply couldn’t invite along all the fighters we would have wanted to.

BT is a big player in the sporting market, as demonstrated by their outstanding coverage of the Champions League in football across the week. Well, we’ve got a good few champions of our own now more than ready to continue taking centre stage on Saturday nights for many years to come.

The initial agreement we had in place was set to run for a number of years, but within that there was the option to extend it further and I am naturally thrilled BT have taken the opportunity.

It is a ringing endorsement of what we have been doing up to now, which has not only delivered ratings, but more importantly fantastic entertainment for BT Sport customers.

We are now in a position where we can strategise for the next five years – and hopefully beyond – and map out numerous major shows and title opportunities for our fighters, while also progressing the careers of the younger element, which BT is keen to shine a light on.

It has certainly been a productive few weeks for our operation, what with Tyson coming onboard and big title fights coming to fruition – although we are naturally disappointed that Liam Smith had to withdraw from his world title shot due to illness – and now is the time to keep striving for more of the same and move from strength to strength.

LIAM SMITH MADE the correct call in electing to withdraw from his WBO world super welterweight title fight against Sadam Ali that was scheduled to go ahead on May 12 after being laid up with a virus and an allergic reaction.

Believe me, he would not pass up on such an opportunity lightly as he demonstrated when he proceeded with taking on Saul Alvarez in 2016 despite not being able to spar due to cut sustained during preparations.

It resulted in him not being able to show the best of himself in the biggest fight of his career.

He was obviously a bit down in the dumps about it all when I saw him on Tuesday, but the good news is he remains the mandatory challenger and we will reschedule the fight for September.

BRADLEY SKEETE ALSO didn’t get to show what he is all about after having the wind taken out of his sails by Kerman Lejarraga in the second round of his European title challenge on Saturday night in Bilbao.

Bradley, fortunately, possesses the strength of the character and ability to come again and I am sure he will soon be back in the swing of things.