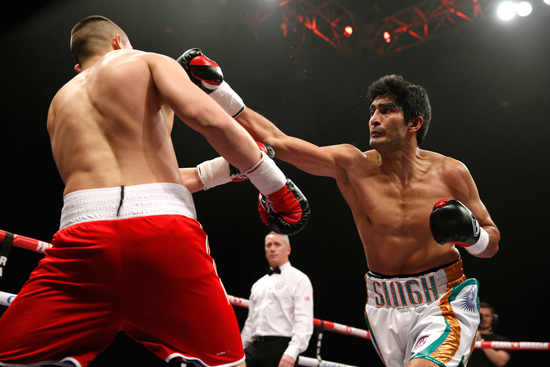 Undefeated Singh, 7-0 6 KO’s, outworked the experienced Hope over ten rounds to claim his first title in the paid ranks in front of a packed out Thyagaraj Stadium in New Dehli last month.

India’s first ever Olympic Games boxing medallist came away winning every round and claimed a well-deserved unanimous decision with scores of 98-92, 98-92 and 100-90 by the three judges.

Queensberry Promotion’s maiden voyage to India proved a resounding success. The tremendous reaction on social media from the stars of cricket and Bollywood personalities who were in attendance at ringside prove that history was well worth making.

For Singh, already a massive draw in his home country after his amateur exploits, it is now onwards and upwards and his promoter Francis Warren is currently plotting his next moves.

“It’s not about myself, it’s about my nation, my country,” Vjender said after last month’s win.

“This comes after a lot of hard work put in by me, my trainer and my team. I thank my coach, my promoter and my team who have done a fantastic job. I also thank the fans, the celebrities and sportspersons who came out to watch my fight.”