INTRODUCING ARCHIE ‘THE SHARPSHOOTER’ SHARP: “I’M 100% CAPABLE OF WINNING ALL THE BIG TITLES!” 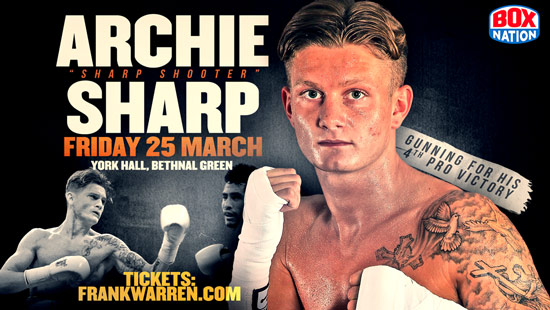 The frighteningly talented 20 year old lightweight from Welling has already romped to a hat-trick of victories since shedding his singlet last July.

‘I had my first bout -against a kid unbeaten in three – when I was just 11 years old and I won all of my first 25. In fact, my first defeat came in the final of the European Schoolboys on a double ‘countback’ against a Russian in Russia. That was my only defeat in 22 international contests,’ says the silver quick kid they call ‘The Sharpshooter.’

The fight game has featured as an integral part of affable Archie’s life since he attended infant school.

‘My Dad and all my uncles boxed amateur and my four younger brothers have all had a go. Taylor, who’s 18, once got to a national semi final.

‘Dad had me working on the pads indoors even before I first went into the Eltham ABC gym – where dad had once boxed himself – at the age of just seven. He wanted us to be able to look after ourselves and stay fit.  I was always a ‘livewire’, a fiery kid. Boxing disciplined me, slowed me down.

‘From the off, I was coached by Richard Sawyer who now trains me as a pro. There was some class talent at Eltham at the time, guys like Bill Saunders and Nathan Weiss. Watching the sparring was unbelievable.’

By the time razor Sharp was eligible for formal competition, aged 11, he was already a formidable force.

‘My dream was always to follow the Olympic route but I continually got knock backs from the GB set-up in Sheffield. Despite my wins over the McCormacks, they were continually  selected over me.

‘I did go in the senior ABAs twice but it just never worked out. One year I lost at bantam to Lucien Reid from West Ham and another time I conceded a bad split decision in the national quarters at The Echo Arena.

‘But I’d been sparring top quality pros like (IBF super-bantam king) Carl Frampton, Choi (Tseveenpurev) the Mongolian, Ashley Sexton, Iain Weaver and the Walsh brothers (British champions Liam and Ryan) since I was 15, 16 so, with nothing happening on the GB front, I decided to have a go in the pros.’

After committing to Queenberry Promotions, the Sidcup-born ‘Sharpshooter’ has ripped through the opposition placed before him thus far; hammering a hapless Hungarian in just 130 seconds on his debut, then inflicting a brace of four round shutouts over regarded domestic circuit fighters Dan Carr and Qasim Hussain. All performances earned exemplary reviews.

He says: ‘If I need to stand and trade I can but I’m more a slick moving counterpuncher who likes to slip and roll. Hit, don’t get hit is my philosophy. I’m also very accurate. I don’t waste much. Throughout my career, I’ve put lots over so there’s definitely power there.

‘I train alone with Richard (Sawyer) at a little gym called Omega in Sidcup but sometimes I go to Jason Rowland’s gym in Essex. Presently, we’re working on me not admiring my work, being aware of what’s coming back at me.

‘We travel everywhere for sparring. Lately, I’ve had good spars with Mitchell Smith and I’ve even done stuff with (unbeaten light-middle prospect) Ahmet Patterson so I know my capabilities.’

Away from the ring, young Archie is in a stable relationship and confesses to being a man of modest pleasures.

‘I’ve got a missus who has a little girl – my step daughter – and most of my time away from the gym is spent with them,’ he says.

‘I follow Chelsea and I love rugby. I played full back for five or six seasons before the boxing got serious. I loved being the last man, getting stuck in.

‘Apart from that, I spend a bit of time at the driving range but I ain’t very good and I take my younger brothers out with the guns, ferreting.’

But the old fight game never drifts too far from the mind of this prodigiously gifted south London prospect.

‘Boxing is my life, a life I’ve been living since the age of seven,’ he concludes.

‘From day one, it’s been my dream to be world champion and I believe that with hard work and by staying focussed, I’m 100% capable of winning all the big titles.’