INTRODUCING FRAMPTON FOE LUKE ‘ACTION’ JACKSON: “WHAT I’VE HAD TO OVECOME IN MY LIFE IS PHENOMENAL!” 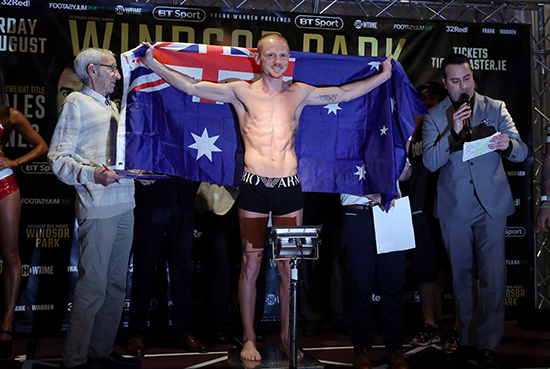 Tasmanian Devil Luke Jackson can’t help but chuckle at comments that he is Carl Frampton’s softest opponent since 2012, or at odds setters who enlist him as a distant 16-1 outsider ahead of his WBO ‘interim’ featherweight title challenge before 20,000 foaming Frampton-ites at Windsor Park, Belfast on Saturday.

True, this is the ‘Action’ man’s maiden paid venture outside Oz and he’s yet to feature in a 12 round fight. True, there’s few instantly recognisable names among his 16 professional opponents. However, all were beaten out of sight and seven failed to finish as this lightly-grilled 33 year old gobbled up Australian, WBA Oceania, WBO Oriental titles and a top five world ranking with the WBO.

Prior to that, the juvenile horror from Hobart transformed his vice-riddled life to become a highly decorated globe-trotting amateur thoroughbred who medalled at the 2006 Commonwealth Games in Melbourne and skippered the 2012 Australian Olympic squad in London.

“I had a pretty shitty childhood, in a very shitty area. I hung out with a bad crowd. I tried to be tough, believed I could fight, but probably couldn’t!

I got heavily involved in drugs. I played a bit of AFL (Aussie rules football) and was actually pretty decent but the drugs threw me off. There wasn’t much going on for me.

Then at 17, I found boxing and it changed my life. If you can’t find a good role model, be one! I had the first of my 145 amateur bouts (113 wins) in June 2012. My whole amateur career was conducted as a senior and over 80 of my contests were at international level.

I was already 28 when I decided to chance my arm as a professional and I just pledged to be the best I could possible be, whether that was Australian champion, regional champion or world champion. Saturday evening represents my final hurdle.

Regardless of the ‘interim’ title, I’ll 100% consider myself world champion when I win on Saturday because I’ll have defeated a world level fighter, a two weight, former unified world champion. It’s my avenue to big money paydays.

Belfast has been absolutely unbelievable to me since I landed. I’ve been overwhelmed by the support. The people here can’t do enough for me.

I know Carl’s mad at me because of some stuff that’s been printed in the press where I’ve been seriously misquoted or at other times ‘misunderstood’. I was actually complementing Carl when I said he did nothing exceptional because what I meant was he covers the board, does everything very well. He’s not just a puncher or just quick. He’s got great feet and a high fighting IQ. No one aspect stands out. Clearly, Carl’s taken it the wrong way. We’ll sort it Saturday.

I can guarantee the Belfast fans a great spectacle. There’s been a real kick in my step preparing for this fight. I’ve put a lot of hard work into it. I’m coming to fight and, whatever happens, they’ll leave respecting me.

Carl’s coming to ‘kill’ (destroy) me so I’ve got to be ready. I’m going to have to be smart; defend, jab, use my counterpunching skills. I don’t predict. I just adjust to whatever happens in front of me.

But this isn’t about Carl, it’s about Luke Jackson. What I’ve had to overcome in my life has been phenomenal. That’s what gives me the hope that I’m about to shock the world. It’s my destiny to win this fight and become world champion. It’s meant to happen.”