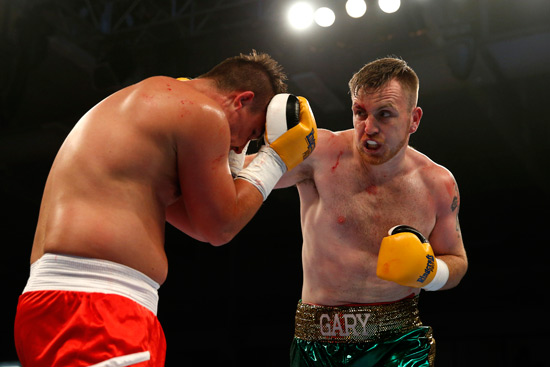 The 22 year old former European Youth finalist from County Mayo has already mullered his first two professional opponents (both Slovakian) before the scorecards were required and he’s promising to complete a hat trick of routs when he features in a four rounder against an as yet to be announced opponent in the Ulster capital.

‘I always guarantee a good show,’ claims ‘The Gallant’ Sweeney, thus named after the Irish folk ballad ‘The Rocks of Bawn’.

‘I’m a big banger who’s been stopping kids with one punch since I was just 13 or 14 years old. I like to trade punches. I’m not afraid to mix it.

‘My first opponent (Mario Lakatos) brought good experience and had won more than he’d lost but I jumped on him, hurt him, got rid of him in one minute 17 seconds. That’s what I’m about.

My second opponent (Marek Gabor) had never been stopped….until he faced ‘The Gallant Sweeney! He got dropped in rounds one and two, finished in the third.’

Sweeney’s amateur CV lists an impressive seven All-Ireland titles across various age ranges – including the 2014 Senior title – although he concedes that he was not reared in traditional fighting terrain.

‘Ballinrobe is a small, quiet town, population around 3,000, and I was a nice little kid, brought up good. I went to school and never was a street fighter,’ disclosed Gary, youngest of seven children, who was actually born in Galway before moving 30 miles north as an infant.

‘My father never boxed but my Granddad was a fine bareknuckle fighter and all four older brothers were Mayo County champions. (Fellow pro) Michael won four national titles beneath senior level so I was interested in the sport from as young as eight.

‘My father opened up the All Stars Boxing Gym for us in Ballinrobe and he coached us until (brothers) Martin, then Michael took over.

‘Starting at 10, I must’ve had around 200 amateur bouts and doubt I lost 25. Aged 17, I won the European Youth silver medal in Dublin and I also boxed for Ireland in Bulgaria, Poland, Russia, Germany…all over. I represented Ireland between 30 and 40 times.’

Blessed with fast, heavy hands, ‘The Gallant’ one first got a flavour of the paid code back in 2014 when he was recruited by the Mexican Guerrero’s for five round fights within the World Series of Boxing (WSB) circuit.

He says, ‘In my only fight, I beat a Romanian who was  representing the British Lionhearts at the York Hall in London. But shortly after, I picked up a few injuries which put paid to my big aim of representing Ireland at the (2016) Rio Olympics. I wasn’t prepared to wait another four years so I joined the pros.’

After an initial commitment to Rodney Berman’s Golden Gloves outfit in Johannesburg went belly up, the Mayo marauder joined the Irish exodus to Spain, inking a deal with the upwardly mobile MGM group in Marbella.

‘I went over to South Africa twice but decided to walk away from it,’ explains 6ft Gary who is coached by elder brother Michael, a former challenger for the Irish cruiserweight title.

‘Macklin’s Gym Marbella is the best thing to happen for Irish boxing for years. It’s probably the best training facility in Europe. So many top champions train there and I can learn so much just studying them training and speaking to them.

‘They’ve also got the best conditioners and best nutritionists plus the connections and influence to keep me busy whilst I learn my craft.  As a rising prospect, you can’t ask for anything more.’

And he intends to fully express his gratitude by delivering a sizzling show in Belfast on Saturday week.

‘I’m super excited about making my Irish debut as a professional. All my friends and family from Mayo will be along to support me so it’s going to be brilliant. A points win would be okay, I suppose but I’ll definitely be going for the knockout; keep that buzz going,’ he concludes.

‘A fight for the Irish title in about two years time would be realistic but for the next 12 months I’ll just concentrate on developing my pro style and building my record then see what happens.

‘Ultimately, I intend finishing up with a nice bank balance and a world title.’