“NAZ NAMED ME ‘TNT EXPLOSIVE AFTER WATCHING ME SMASH THE PADS!” 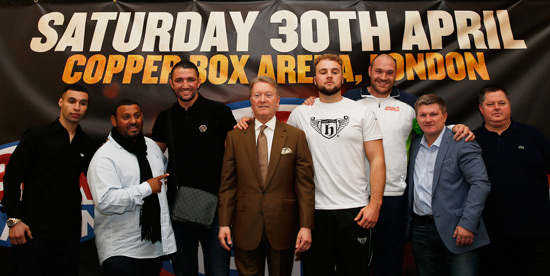 The Berkshire bomber’s unbridled aggression and concussive punching made him a huge hit in the Eurosport-televised Queensbury Boxing League and he now threatens to wreak similar carnage operating under the jurisdiction of the British Boxing Board of Control.

‘I had 30 on the Queensberry Boxing League circuit and I never lost. I won everything. However, I had aspirations to be a boxing world champion so I had to apply for a Board (of Control) licence,’ explains the 25 year old who shall be mentored  and managed by Hall of Fame superstar Naseem Hamed.

‘Naseem is a friend of my fathers and we met before my first on the Queensberry Boxing League. Naz has been like a second father to me.

‘When I contemplated going pro I said to him: ‘Please be honest. If you don’t think I can do it, tell me.’ He replied that he not only did he like what he saw, he wanted to manage me! He named me ‘TNT Explosive’ after watching me smash the pads.

‘Naz has shown me how to control a fight. He also brought in a punching specialist for me. His cousin (Anas Oweida) trains me. Naz knows the right people we need to get involved and the right route to steer me. He freely shares his knowledge and does pads with me.’

Unarmed combat has been a staple in the Hillingdon born hope’s life since his primary school years.

He recalls: ‘Dad boxed amateur and, from the age of just five or six, he taught us how us to look after ourselves. He was my coach for my first 10 years. At school, I was very cocky so I was always in a fight. I had to be able to handle myself otherwise I’d have got battered every day!

‘Then, between the ages of 14 and 17, I had 10 or 11 amateur fights at the Hayes ABC, before drifting into the unlicensed thing.

‘The experience that I gained in the Queensbury Boxing League will certainly help me with regard to performing before a crowd. Also, there were plenty of ex pros on that circuit. I once beat Daryl Setterfield. There was a time when I used to fight up at cruiserweight so no welterweight is going to scare me. I’m used to being hit hard by big men.’

Whilst there are unquestionably a few rough edges that still require planing before he can contemplate title fights, the savage Sikh insists he’ll not be caught short with regard to application.

‘I train three times a day, cardio first thing, boxing gym during the day then a strength and conditioning session before I go to bed. In between, the only TV that is on in my house is BoxNation. I particularly study the older stuff; the Tyson era, the Naz era, the Masters!’

After the disappointment of a false dawn when the proposed Harrow bill was scrapped earlier this month, banger Bange can’t wait to fly out of the traps and showcase his explosive wares on Saturday. And he enters with the incentive that an impressive showing should secure a berth on Vijender Singh’s homecoming show in India this June.

‘My family originates from the Punjab  – I was there myself six months ago – so a slot on the bill in Delhi would be unbelievable,’ he admits.

But first he is promising capital fight fans a debut to savour.

‘Stylewise, I’m told I’m similar to Mike Tyson, lots of head movement and serious power in both hands. It all comes through timing and I love to work the body. In my last ‘unlicensed’ fight they had to stretcher the guy out the ring after I broke his ribs,’ he states.

‘I don’t still want to be boxing after the age of 30 so it’s going to be a quick ride, smash and grab! This year is all about building a platform and getting my name out there. I’m exciting. Just you wait and see.’