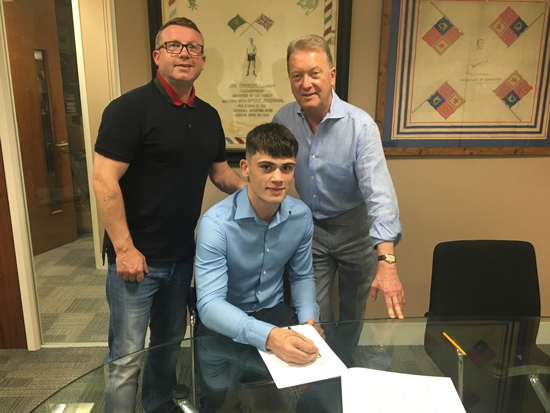 The 21 year old Brummie was permanently excluded from two schools by the age of 14, and faced a future of frustration and incarceration before the Noble Art came knocking.

‘As a teenager, I was hyperactive, didn’t hang with the best crowd,’ concedes the former six time national junior champion who debuts as a pro in a four rounder on promoter Frank Warren’s Copper Box show on September 16th.

‘I’d stay out all hours and did stupid things. I was expelled twice – once at 12, then again at 14 – for basically being a cheeky toe rag. I was never a bully but, if there were any fisticuffs to be had, I was basically at the front of the queue. I was thought of as a tough kid, possibly ‘Cock of the School’. I always done alright!

‘Boxing basically saved me. I’d not have been far off prison. The expulsions probably proved a blessing because they led to me being sent to an ‘alternative education program’ at Tamworth ABC which was sort of a last hope for me. I was taught through the medium of boxing and ended up winning six national junior titles. Now I’m entering the second year of a foundation degree in sports science at Loughborough College.’

Hatton was inducted into the sport by his fight daft father Tim, a decent amateur whose own pro aspirations were culled when he took his marriage vows.

‘I had my first bout for the Birmingham Irish club at 12 and weighed 85 kilos, heavier than I am today!’ quips Ryan who was born in Sutton Coldfield but now resides in Tamworth, Staffs.

‘I won 50 of 60 amateur bouts and captained an England senior team against Germany. I was offered a trial at the Team GB set-up in Sheffield but couldn’t attend due to an injury. My amateur highlight was probably beating Viddal Riley of West Ham on a unanimous points decision in the NACYP final last year. He was always picked over me so it was two fingers up to the national selectors!’

‘I’ve been sparring Tom’s pros since I was 16 years old,’ says Hatton.

‘He’s always helped me out with gear and he’s a terrific coach, notices all the little things that make a big difference. Tommy Langford always gives me pointers to work on after a spar and his work ethic inspires me to match him.

Despite monopolising the junior titles, Villa fan Ryan failed to advance beyond the English semis in three senior ABA campaigns but insists he’ll be better suited the professional sphere.

He says: ‘In the amateurs, I boxed at heavyweight but ‘day-before’ weigh-ins will allow me to compete at light-heavy as a pro. That’ll definitely benefit me. The hardest thing I’ve found is kicking bread out of my diet.

‘Also, I’ll have more time to settle into a fight. I’m a 6ft 2in box-fighter whose best attributes are my speed and footwork. My heroes are ‘Canelo’ Alvarez and Tommy Hearns. I love that jab!

On Saturday week, this richly gifted prospect embarks on a new journey, sans singlet, as a preliminary act ahead of Billy Joe Saunders WBO middleweight defence against Willie Munroe Jr.

‘I couldn’t believe it when Tom told me I’d be debuting on a world title undercard,’ disclosed Hatton.

‘I’ll be taking about 130 fans to the Copper Box but I won’t let the occasion get to me. I just hope to show the fans my whole game; class boxing plus a bit of power punching.

‘Over my first year, I hope to stay unbeaten obviously, but I hope I get tested against kids with good records who come to have a scrap.

‘Long term, I’d love to front a big show in Brum. There’s enough talent in the area. Every young fighter dreams of being world champion but I’m confident that I will achieve it.’