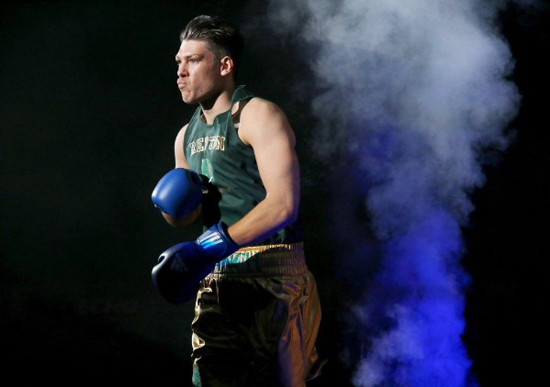 Amateur phenom James Branch is driven by the dream of lifting a barrow load of professional titles that eluded his father (also James).

Senior, a mercurially gifted junior at the Repton conveyor belt of champions in Bethnal Green, east London, was touted to shine on the world stage when he vaulted to the pro sphere under promoter Frank Warren back in the mid 1990s.

However, personal circumstances resulted in his immense potential remaining unfulfilled and he withdrew from the profession in his early 20s, after just four paid starts.

‘I’ve got to finish off the job Dad started,’ states the 22 year old southpaw who lifted seven All-England amateur titles including the 2017 Senior ABA Cruiserweight crown.

‘Dad was one of the best amateurs of his generation, a nine-time national (junior) champion who, like me, just missed out on the (1996) Olympics due to an injury. Unfortunately, it didn’t work out for him as a pro. I came along and brought added pressure.

‘But he ‘made’ me. With mum, he’s my rock for every situation, a life coach as well as a boxing coach. He’s steered me through all the shit side, the injuries and amateur politics.

‘Stylewise, we’re very similar though I’m probably a bit more flash and confident and, as a southpaw, even trickier. I’m quite ‘flairy’. I use my reactions, work off my opponents.
‘Though I started training aged eight, I couldn’t get any bouts in the UK because, one, I was James Branch’s son and, two, I was very big. I finally had my first bouts at a tournament in Denmark when I was 13 and I destroyed the Danish and Polish national champions. They complained afterwards that it couldn’t possibly have been my debut.

‘Initially, there were added pressures.  It was always: ‘That’s ‘Special Branch’s’ Boy’. But, winning seven times in two and a half weeks to reach the (2014)Senior ABA final, aged just 17, helped me step out of the ‘old man’s’ shadow.

‘As a kid, I actually wanted to be a weatherman but, once winning became a habit, boxing became my life. There’s no better feeling than having your hand raised inside a boxing ring. I only lost three of my 50 amateur fights and I’m still fuming about them!

‘(Current Commonwealth cruiser king) Lawrence Okolie narrowly outpointed me in one of our two bouts, Warren Baister beat me in that ABA final when I was just 17 and the other loss was years ago against a kid I couldn’t name or even recognise now.’

When a back injury extinguished his goal of participating in the 2016 Rio Olympics, the ‘Special’ one continued in a singlet for a further season –  finally adding that elusive Senior ABA title to the impressive family horde – before opting to punch for his lunch under Martin Bowers at The Peacock facility in Canning Town.

‘Twenty-two is very young to turn pro, especially for a cruiserweight but I’d already won all the national titles and couldn’t really work with the GB coaches in Sheffield. They did their best but had this ‘one-style suits all’ mentality and mine didn’t fit,’ says the Hainault born and based ex carpenter.

‘Working with Martin has been a blessing. Another mentor and a proper gent.  He’s taken my strength and fitness to new levels.

‘It’d be nice to have three or four fights before the year is out but I’m in no rush. I intend to have a very long and successful career so I’ll take my time to adapt, settle into the profession and improve.’

After a false start at April’s aborted O2 bill, the evasive Branch kickstarts his professional innings in a four rounder on the parade of prospects at the Arena on June 23rd.

‘It’s a brilliant stage, a dream. Fans will see, I am the future,’ warns Jamie.
‘I know professional boxing is more a business and fans will be looking for me to spark people out in style. In the amateurs, you only have three rounds but I still stopped quite a few and plenty more were ‘broke’ by the final bell, didn’t know what was going on. With one more round, I’d have finished them.

‘I think my style will actually be very marketable for the pros. I’ve got excellent reflexes and natural awkwardness, and I can open opponents up with my movement.
‘Often in top amateur matches, fans were on the edge of their seats as a fired back with my hands down. I’m a very cool, relaxed customer who intends breaking opponents down, then stopping them.

‘Of course, it’s good to look a million dollars but next weekend I just intend to win, no matter what. If you keep winning, you won’t go wrong in this game!’