Neat boxing nice guy Steven Ward, aka ‘The Quiet Man’, is keen to cause a commotion in Britain’s flagging 175lb class. 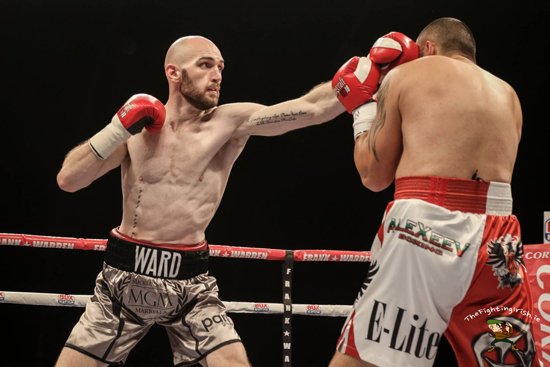 The oft maligned division has been devoid of a dominant domestic champion since Tony Bellew relinquished the British belt in 2013 and the 2010 Commonwealth Games silver medallist is keen to fill the void.

‘The light –heavy division is quite drab right now so I intend to kick-up some dust!’ claims the usually reserved 26 year old father of two who heads into battle for the third time as a pro at Belfast’s Waterfront Hall tomorrow evening. BoxNation broadcast live.

‘I’m just Joe Bloggs. Anyone who met me for the first time would have no idea I was a professional boxer; hence ‘The Quiet Man.’

‘I’m a real family man – my step daughters 11 and my wee man’s just one – and I just like to chill out over the park, making the most of our time together before I have to go away. My biggest vice is a wee game of snooker; not much effort required! Oh, and I’m a coffee snob!

‘But I’ve a real drive to achieve big things in boxing.’

The recently married ex joiner from Monkstown has consistently shown himself to be a class act since defying his mother and lacing up whilst still at primary school.

‘My granda’ from my mum’s side was a boxer in the army and amateurs and later coached at amateur clubs. I loved his (boxing) stories,’ says Steven who captured five All-Ireland titles across various age groups and twice represented Northern Ireland at the Commonwealth Games.

‘But seeing the state granda’ come home in, after tough fights, Mum knew how brutal boxing could be. She tried to shield me but, one day, when I was about eight, granda’ stuck a punch bag up in the garage….and I was hooked! At the age of about 10, I joined the Monkstown club.’

Naturally introvert, Ward openly acknowledges the role boxing played, not only in building his confidence but also in shielding him from the less scripted violence that, for too long, soiled Ulster’s capital city.

‘I was a pretty grounded kid, mum was pretty firm. If ever I did stupid stuff the coaches at the Monkstown club stopped me from training and I always wanted to train more than anything,’ says the shaven-skulled Glasgow Rangers fan.

‘I probably had about 100 amateur fights and lost roughly ten. Only the national number one’s beat me.

‘As a senior, I boxed up at 91 kilos (heavyweight). At the 2010 Commonwealth Games in Delhi I was about a stone under the weight limit and nobody expected me to achieve anything. But I reached the final where I lost to England’s Simon Vallily

In 2014 (Glasgow), another Englishman, Warren Baister, beat me on a split in my first fight. I briefly fell out of love with boxing after losing to Gary Sweeney in the 2014 All-Ireland final; unlucky is not the word! I was robbed blind!’

Last autumn, this classy and crafty box-fighter joined the profession under Matt Macklin’s ever expanding ‘Mack The Knife’ (MTK) operation, based in Puerto Banus, Marbella. However, he has commissioned highly regarded Manchester coach Oliver Harrison to oversee his transition between the codes.

‘I’m blessed to be part of the MTK set-up – I’ve 100% faith in them – but, because of my kids, I didn’t really want to go to Marbella, though I hear the facilities there are class,’ explains Ward who profits from lavish sponsorship from The Parr Group and rents a flat In Bolton.

‘Oliver had done his homework on me, as much as I’d done mine on him. He’s very knowledgeable. I can overdo the training but he knows when to put the reins on. Above all, he genuinely cares about the well being of his boxers. He’s a nice way about him. We formed a good trust.

‘There’s a terrific atmosphere at his gym and I know I’d not get the sparring I receive here anywhere else. You’ve got (ex Commonwealth Super-Middle boss) Rocky Fielding, (triple world title challenger) Martin Murray and (current Commonwealth light-heavyweight king) Bob Ajisafe, quality operators who are all around my weight. They’ve all brought me on loads and we bounce off each other.’

Thus far, the slick 6ft 3in stylist has fought twice in a pro ring, whitewashing a Bulgarian and a Lithuanian in educational four rounders. In both instances, Ward impressed with his organised skills, high energy and composure.

He says: ‘I’m a big rangy, textbook fighter who’s quick on his feet but I’m gradually starting to adapt and settle to the pro game; conserving my energy, sitting down on my shots, punching harder. I was in the amateurs for 15 years so I’ll not convert overnight but I’m further ahead than I expected to be.’

Tomorrow, he steps up to six round level against a still to be announced opponent and will be hoping to treat his army of home city fans to a clinic of classical pugilism.

‘I went to one of (Carl) Frampton’s fights at The Waterfront and it’s like a cauldron for boxing. The way it’s designed, every fan is real close. I’m really excited,’ he concludes.

‘Belfast is just a brilliant fighting city with the friendliest people and it’s humbling to be a wee part of that. I sold almost 300 tickets for my debut at the Titanic Exhibition Centre and hopefully similar will turn out again. I can’t thank them enough.

‘At this stage, I just want to remain unbeaten and build up a rep. If I perform the way I know I can, I’m sure I can deliver a stoppage …then treat myself to a beer and a Banofee pie afterwards!’