INTRODUCING WELSH STRONG BOY DALE EVANS: “I LOVE LOOKING OVER OPPONENTS DOWN ON THE CANVAS!” 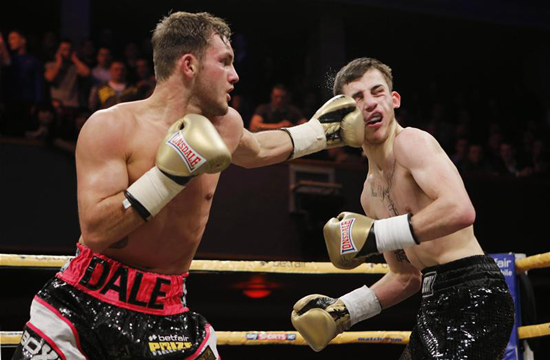 How did you first become interested in boxing?
I was brought up on a council estate in Carmarthen, it’s a pretty quiet town. I was a really competitive kid who usually threw a tantrum if I didn’t win and that turned into fights. My grandfather first took me to the Carmarthen ABC when I was nine years old and I stuck at it ever since, largely to please him.

What did you achieve as an amateur?
I won about 60 of 75 and took one schoolboy and two Youth titles plus the British CYPs. I lost to (Olympic silver medallist) Fred Evans in the one Welsh senior final that I made. I boxed for Wales as a youth but didn’t really make it at international level because I liked to get ‘stuck in’ and my style didn’t really suit the computer scoring. I decided to turn pro instead at 19 to try to make some money.
I could always bang. I was dropping boys when I was a 13 year old schoolboy which was pretty unusual and, even when I started boxing men at 17, I could always match them for power.

How did you acquire the nickname ‘Big Boy’?!
It didn’t come from the girls, unfortunately. I was just unbelievably short at nursery and when Mam collected me she’d call me her ‘Big Boy’! I never really thought it through when I had to select a nickname. Everyone’s a bit disappointed when I step on the scales!

You first came to national attention in January 2013 when, with just five fights on your pro CV, you scalped Mark Thompson and future British and Commonwealth champion Sam Eggington to reach the final of Prizefighter.
Prizefighter wasn’t just about the money, it built a platform for me, showcased me as an exciting fighter to follow. I actually thought I nicked the final (against Sunderland’s Glenn Foot) but couldn’t say I was robbed. Unfortunately, my performances haven’t been as consistent as I’d have liked since.

Indeed. In March last year, you were dropped and stopped in five by Londoner Larry Ekundayo at the York Hall. What went wrong that night?
Larry’s a nice guy but no way should he be stopping me. My prep was poor, Gary (Lockett) couldn’t work my corner and my head weren’t in it. Disastrous night. I’d love to have it again to erase the memory. Gary chooses the right fights at the right time but I’ll fight absolutely anybody.

In your last gig back in October, you dumped champion Sam Eggington heavily in round two of a short notice British and Commonwealth title challenge before conceding widely on points. What prevented you capitalising?
I gave fans a flavour of what I’m capable of but simply didn’t have the fitness for a 12 round fight. But it was definitely one of my best performances.

I was getting frustrated and hadn’t trained for five days. When Gary phoned to tell me of the offer, I think my heart stopped. It was 10 o’clock at night but I was so excited I chucked my gear on and went for a run. I phoned my boss to tell him not to expect me in then moved to Magor to train full-time with Gary. I could feel myself improving day-by-day.

The plan was to slip the jab and crack him hard with the right hand. I caught him perfectly but he jumped straight up. He was still too fresh when I caught him.

You’ve been nominated for a British eliminator against Dundee’s ‘Iron Mike’ Towell, if you emerge unscathed on Saturday. What do you know of him?
I’d not heard of Towell before but he can unleash big bombs, as can I. It’ll be exciting. I’ll be well prepared for once. Sponsors are covering my wages so I can move up to Cardiff and train full time under Gary.

Reigning British and Commonwealth boss Bradley Skeete also boxes on Saturday’s bill. Will you be undertaking a spot of reconnaissance?
Of course. I was also ringside when Brad beat Eggington and he gave a masterclass. He’s a very good boxer without much power. He’s got better skills than I have so it’d be pointless trying to outbox him. To win, I’d have to suffocate him with pressure and constantly catch him with heavy shots.
This is a huge chance for me to bring myself to Skeete’s attention. It’s vital I perform so I can force fights at a higher level.

What would represent a good night’s work against Sheffield hardcase Ryan Hardy on Saturday?
Whether it’s points or stoppage, I want an impressive win. I need to be happy with myself. I’d hate for anything bad to happen to an opponent but I love the feeling of knocking people out, looking down at opponents on the canvas!

Coach Gary Lockett adds: ‘Dale has short arms and lacks a bit of natural talent but more than makes up for that with grit and determination. He had a tough upbringing and has had hard manual jobs since he was 15 or 16. That’s made him very single minded. But he’s a nice boy, the mad hatter of our gym.
‘He carries deadening power rather than ‘take out’ power. Once he lands, opponents stay hurt and he can cause distress with any punch from either glove. He leaves me black and blue when I take him on the body bag.

‘He works in west Wales and only comes to my Cardiff gym on Saturdays which isn’t enough. He needs a break, a big promoter to get behind him so he can undertake better quality training. If Dale wins his British title eliminator with Mike Toweel, he’s got life choices to make.

‘I’d put him in with Bradley Skeete, 100%. Dale delivered a seriously dangerous performance in his British title challenge to Eggington with just 10 days notice. I contemplated pulling him out after rounds 10 and 11 but he actually finished strongly. Who knows what he might’ve achieved with a full camp.

‘We hoped something big might’ve come from that but unfortunately it just scared people away.’

Limited tickets are available on the door.