Irish hero Jamie Conlan has signed a promotional agreement with top promoter Frank Warren as he embarks on the next stage of his career towards a world title. 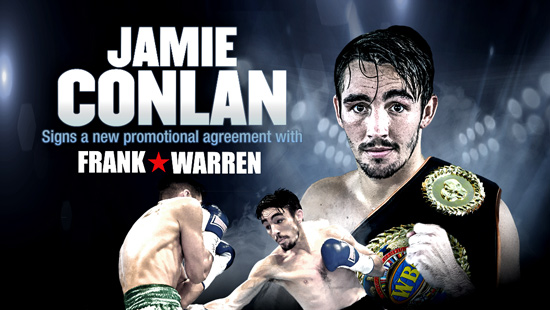 The red-hot Belfast super-flyweight is undefeated in 15 fights with 9 knockouts and is a former WBO European Champion. Currently he holds the WBO Intercontinental title and a number five world ranking in the organisation.

Know as ‘The Mexican’ for his thrilling, all-action, style, Conlan has established himself as fan favourite and brings excitement every time he fights.

Conlan is in a ultra-competitive division that contains British rival Paul Butler, plus the classy, big-hitting, WBO World Champion from Japan Nagoya Inoue.

The 29-year-old will be managed by MGM and is thrilled to sign with Warren who he believes will take him to his dream of a world title.

“I’m absolutely delighted to have signed a promotional deal with Frank Warren who I believe is the best promoter out there and will get me where I want to be and that’s a world champion. I’m pushing onto world level now and Frank’s expertise is second to none so I know that I’m in great hands. With Frank and MGM in my corner I can realise my dream.” Said Conlan.

Warren added, “Jamie’s a cracking talent and I’m delighted to welcome him to the team. He’s got a tremendous following in Ireland that will only get bigger and bigger as he continues to build towards the world title. The 115 pound division is certainly livening up again and there are some great fights ahead of him and I look forward to giving him the opportunities to achieve his ambitions.”