Is flaky Haye really serious, or just game for a laugh?

It is some six years since he tamed the hairy-backed monster from St Petersburg, Nicolay Valuev, to become Britain’s first world heavyweight champion in a decade, emerging as one of sport’s most celebrated figures. His charm, chat and chutzpah endeared him to audiences well beyond the prize ring. 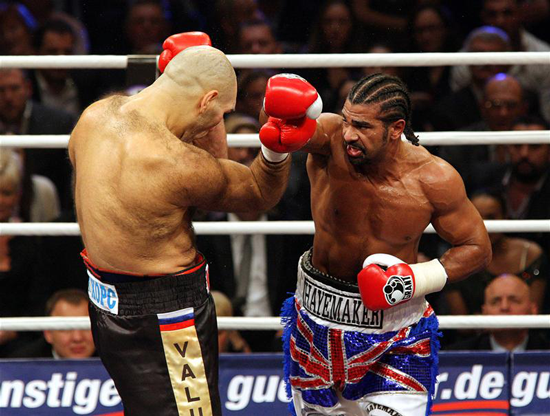 It is over four years since he limped lamely out of the Hamburg ring, easily relieved of that WBA belt Wladimir Klitschko which added to his collection, and three and a half since he last threw a punch for profit, felling Dereck Chisora in five rounds at Upton Park.

Now the Hayemaker is back ‘unretired’, as Muhammad Ali used to put it before his own comebacks, and flaky as ever.

His absence was intended to be permanent he says because the shoulder injury he sustained while training for his already once-postponed bout with Tyson Fury was original medically deemed to be too great a threat for the continuation of his career: one which had seen him win world titles at cruiserweight and heavyweight.

Now that appears not to be the case, and appetite re-whetted, he has decided to lighten our lives again, returning to London’s O2 tonight against Mark di Mori, an Aussie who, resides in Croatia, has lost only once- 11 years ago- and is ranked tenth by the WBA.

With all the obvious TV outlets apparently sceptical, David has washed up on Dave, the free-to-air home of old comedy repeats and what it calls ’witty banter.’ Hmm.

Haye says he’s been counting the days -1,282 to be precise – before reminding us of what we have missed.

Under new trainer Shane McGuigan, scion of Barry and almost a decade younger than his new charge, Haye claims to have been re-invigorated, scenting a fresh pursuit of a world heavyweight crown, not to mention the big bucks that go with it.

He’s 35, but 35 seems to be the new 25 in heavyweight boxing these days and despite his inactivity Haye hasn’t missed a trick in making sure his name remained in the public eye.

“A lot of people still want a piece of me,” he insists. “I get to a lot of dinners and charity dos and it’s all fun. I do whatever I can, and if you can raise 10 grand or so for a particular charity it makes you feel good. It’s easy not to do stuff like that but it’s also just as easy to do it.”

So, no more Mr Nasty guy, like the time he portrayed the severed heads of the Klitscho brothers on a T-shirt and infamously brawled with Chisora after a Munich press conference in Munich.

By comparison the build-up-up to tonight’s fight has been positively civil.

“In haven’t said or done anything controversial as I don’t need to hype it up,” he says. ”Everybody knows who I am. When I was saying controversial things it was to be noticed, just to get column inches.”

Some comeback-makers might have selected less hazardous opponents. Flaky he may be, but Haye’s no fool. He would not have hand-picked di Mori if he did not think he could beat him and look good doing it.

Though just how many genuine fans will turn up at the O2 or tune in to the lads’ TV channel remains to be seen.

Haye claims he is seeking a new audience but what he is really seeking is renewed credibility for either a future world title fight or a massive pay night against Anthony Joshua, who he reckons is ready to meet and beat Fury now. ”Anthony Joshua throws punches, he is not afraid to let his hands go. I like that.”

It is hard to dislike Haye. He can be engagingly witty, is always good copy, and certainly knows not only how to sell a fight by playing the media – even if he has frequently irritates us by turning up late for press conferences.

Yet his has been a career punctuated by injuries and pull-outs. We were in Austria interviewing Wladimir Klitschko at his training camp when news came through that Haye had called off the fight citing a strained back. By coincidence it was also the day that the sponsoring TV channel Setanta went to the wall.

When they did eventually fight Klitschko labelled him a ‘smart arse’ before cuffing him like an old-time teacher would an errant schoolboy.

The ‘toe job’ excuse temporarily diminished Haye’s popularity, as had a previous farcical fight with Audley Harrison, but he remained typically unfazed.

Nor is he fazed by suggestions that he’s back only because he needs some eventual dosh against Josh.

“I don’t know where that comes from. Financially, I can afford to lose. But within myself, I can’t. Boxing’s not a financial thing for me. It’s about people remembering me in 100 years time.”

Haye once told me that what he really looks forward to after a fight is stuffing his face with about a kilo of chocolate until he’ sick. He also says he does not have sex for at least a couple of months beforehand, believing in old-school abstinence, explaining lucidly: “When you ejaculate you lose part of your soul – it’s what the Chinese call Chi, the life force, the energy that is held in men, and the man is more vulnerable after he has had sex.

“Most people want to roll over and sleep. This isn’t the feeling you need when you fight, you need to be 100 per cent focused.” 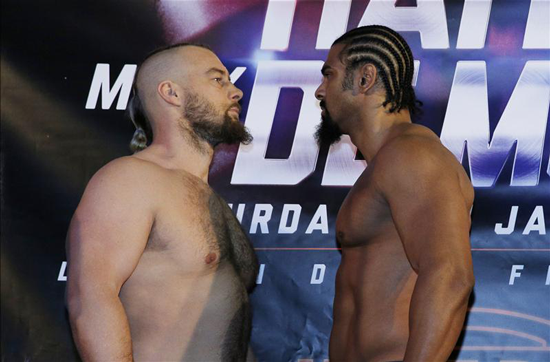 He says he’s returning with a strategy based more on injury-prevention. “I’ve no intention of getting hit or hurt. For me this game is simple. Win titles, make as much money as possible and get out with as many faculties as possible. That’s it.”

“So, let’s get it on. People are saying this will be the tricky one – the first fight back is the tricky one. Is the opponent too tough? Is he not tough enough? You don’t want somebody who will get knocked out by the first punch but do you want him to be there for 10 rounds? It’s the unknown because nobody knows what I’ve got left – except me.

“I believe I know what I’ve got but until I get in the ring and prove it, it’s just me being confident. I’ve got everything I used to have and then some.”

Well, we’ll see tonight if David really is re-making Haye, or just having a bit of a laugh with his new best friend Dave.