IS THE TANK THE NEW FORCE IN BOXING? 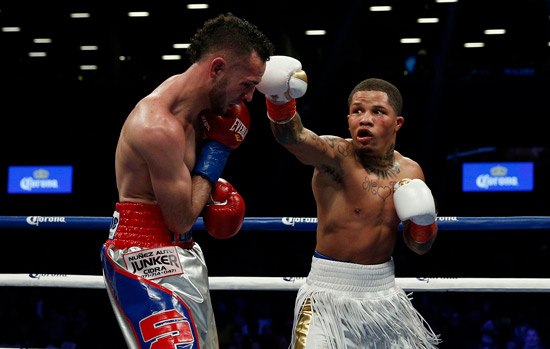 Gervonta Davis certainly propelled himself into boxing’s big league with his eye-catching destruction of Jose Pedraza in New York at the weekend.

The unbeaten 22-year-old, who was in just his 17th professional contest, won’t be found wanting in the hype stakes bearing in mind he is promoted by Floyd Mayweather jnr. He will be able to do all his talking in the ring – Floyd will take care of the chatter outside of the ropes!

It was quite some entrance by the Maryland marauder and it was a measure of the belief his team have in him that they were prepared to thrust him into the world title picture.

For Pedraza, it was a voluntary defence of his IBF super featherweight title that went badly wrong.

The Sniper was snuffed out by the Tank and, from our point of view, the only downside is that I fancy our own Liam Walsh would’ve done exactly the same thing to the Puerto Rican, who looked off his game and perhaps drained at the weight.

There has been talk for a little while now of Pedraza shifting up to lightweight and targeting Terry Flanagan, so I would imagine this move is now imminent.

Walsh was his mandatory and is now head of the queue for Davis, who does look an exciting proposition.

True, the Mayweather man did all that was asked of him and in some style, but maybe we shouldn’t get carried away just yet. Pedraza did look there for the taking and was a sitting duck on the night for nearly all of what Davis threw at him.

The elusive and precise punching Walsh would be anything but easy target practice and this will be a fascinating match when it gets made.

I don’t think anyone can have too many complaints over the unification clash between James DeGale and Badou Jack being scored a draw.

When there are so many conflicting cards floating around at ringside it is difficult to make a compelling case either way and the logical outcome is normally just to do it again.

That appears unlikely in this instance with Jack insisting on extra poundage from now on. DeGale, however, has no shortage of options and is remains the holder of the IBF title.

I personally would like to see him get it on again with George Groves as it is now pushing six years since I promoted their close- fought grudge match at the 02 Arena. I am certainly in the market for a long-overdue but even more appetising second helping.

Groves could well have a world title belt of his own to bring to the table if he manages to overcome Fedor Chudinov for the WBA championship.

Another one that I wouldn’t rule out happening further down the line is either DeGale or Groves against Billy Joe Saunders in the event of Bill ultimately shifting up a weight.

The super middleweight division often throws up some enticing possibilities and I am sure Bill will have a big part to play further down the line.

The BoxNation cameras return to Bethnal Green on Friday February 24 for a night where we will look to further the development of another exciting batch of our young fighters.

It is the kind of show that demonstrates the value to fight fans of a dedicated boxing channel in that we can offer a platform for small hall shows to flourish.

They are as much a part of the game as the big arena promotions and, for many fans, the small hall stuff is the boxing tipple of choice.

We endeavour to cover the sport from top to bottom and it is at venues like York Hall that you get to see the stars of the future in very close proximity.

Headlining the show we have Jay Harris, who is a top little flyweight of great promise, taking a step up to challenge for the Commonwealth title against Thomas Essomba.

It is a great opportunity for Jay – one of a good few exciting fighters coming out of Wales at the moment – and should he pick up his first title there are some intriguing fights that could be made on the domestic front – not least against his fellow Welshman Andrew Selby.

Also on the card, Boy Jones jnr makes the first defence of his recently acquired Southern Area title against Craig Poxton, who has mixed in some good company over his 15 fights.

Jones is a work in progress who needs time to develop and shows such as these give him the opportunities to do just that. He started off from scratch in the pros without any amateur pedigree, so to have picked up a title within two years is testament to the way he has applied himself under the stewardship of trainers Lenny Butcher and Dom Negus.

He has already built up a significant following and I am sure they will be out in force again on the Old Ford Road for a night of boxing that will also see Harley Benn, Zak Chelli and Naylor Ball make their pro debuts.