It’s a gamble for Fury, but he’s right to play the Wilder card 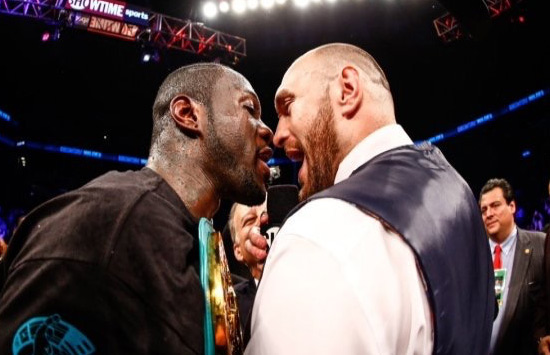 MUCH COLD WATER has been poured on Tyson Fury’s willingness –indeed eagerness – to fight WBC heavyweight champion Deontay Wilder on the American’s home patch later this year – mainly from the direction of Matchroom, promoters of Wilder’s rival champion Anthony Joshua, where there seems a curious reluctance for a unification fight..

But I believe Fury is right in taking a chance against Wilder – and negotiations are well advanced – despite his relative inactivity.

After facing the seasoned German-Italian Francesco Pianeta in only his second comeback fight in Belfast next weekend Fury insists he is ready, willing and able to take on Wilder despite his near three year absence from the ring.

He can cite Muhammad Ali’s return after a similar absence, though even though full-of-himself Fury would not claim to be Ali reincarnate.

True, the Greatest did lose his world title challenge in his third comeback contest (against Joe Frazier) but he eventually ended up champion again. And so could Fury even if he doesn’t beat Wilder this time around.

In boxing when opportunity knocks you take it, and Fury seems the sort of fighter who, when thrown in at the deep end resurfaces’ smelling of roses.

The Wilder fight is definitely on the cards and Fury is adamant that he is up for it.

I can see why. He happens to be the most unorthodox boxer in Britain – if not the world – with a style that may not require the full rigours of actual combat to get into shape.

His gym work and sparring might well provide all the fitness and psyche he needs to be in the sort of mental and physical condition to re-acquire the noise and ringcraft he employed to bewitch and befuddle Wladimir Klitschko back in late 1965.

Indeed, the observations of one of Fury’s recent spar-mates is illuminating. The 6ft 5ins American Walt Harris has been with Team Fury in preparation for the fight against Pianeta on the undercard of Carl Frampton’s sell-out date at Windsor Park.

The 35-year-old mixed martial arts star has also previously spent time in camp with countryman Wilder and has now compared his experience in the ring with the two men.

“They both present different problems. Deontay’s power is world class, it’s unlike anything I’ve ever felt,” he told iFL TV.

“He is athletic as well but he doesn’t move and keep up the intensity and the pace that Tyson keeps up. For a 6ft 9ins, 270lb guy to move and throw as any punches as he does, it is unbelievable.

“I’ve never seen it. before. I think they both have their skill-sets but I think Tyson is the better boxer. His IQ for the game and what he does in the ring is just… well, I’ve never seen anything like it.

“Deontay has more power but Tyson has cumulative power. He can throw four, five punches with power. D throws one, two – and you might not make it back from the one, two but Tyson puts them together and it is special.

“Tyson’s movement is a lot better. The way he cuts angles and slips… I can’t hit him. We’ve probably done about 35 or 40 rounds – I’ve hit him on the face about seven times.

“He is slick. The slickest guy I’ve ever been in there with.”

THIS WEEKEND MARKS the 56th anniversary of the most bizarre night of boxing I have ever experienced in this country.

It happened 1962 at Stanley Park in Blackpool. Local heavyweight boxing star Brian London and his American opponent Howard King had to be piggy-backed into the ring carrying umbrellas during a fierce rainstorm which flooded the open air arena ankle deep in water. But the fight went on.

So wet was the ring canvas that they boxed barefoot with referee Wally Thom wearing a mackintosh. After much slipping and sliding London won with a sixth round stoppage. Talk about swinging in the rain!

Incidentally London, at 84 is still alive and punching in Blackpool, one of boxing’s oldest surviving British champions together with featherweights Sammy McCarthy (86) and Bobby Neill (84).