It’s crazy for Crolla to spurn our £500,000 offer to fight Flanagan

Terry Flanagan is one of the most honest boxers I have known. The Mancunian was the first to admit he was not at his best when he successfully defended his WBO world title against his old foe Derry Mathews last weekend. He knows he can – and will – perform better in coming contests that will underscore my belief that right now he is the best lightweight in the world.

There’s no bullshit with the Turbo. Whatever he says is straight down the line so I have no doubt that the tendonitis which delayed the bout continued to hamper his training runs. 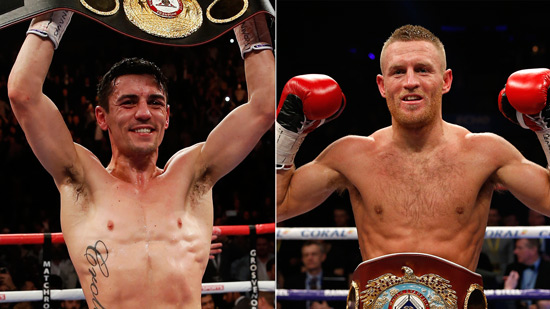 His mobility wasn’t 100 per cent but all credit to him for doing what he had to do – going into the Liverpool back yard of a very good fighter and winning comprehensively in a bout which the crowd certainly seemed to relish, judging from their reaction. Particularly the intensity of some of the exchanges which even saw Flanagan incur the wrath of referee Phil Edwards with some shots and tactics that were straight out of the manual of the old ‘Dirty’ Derry himself.

This was certainly a new dimension to the Flanagan armoury.

But what was so pleasing was how these two always sportingly gave each other a pat after each round and embraced at the end with Derry – who knew he had been outfought – even planting a smacker on Terry’s cheek. That’s the true spirit of boxing. It is why they still call it the noble art.

You can’t take away from what Mathews brought to the table, either. He fought as well as he could against an opponent who has become one of boxing’s class acts.

When Terry gets the blockbuster fight he deserves I know he will deliver. He’s not looking to duck anyone, unlike some fighters we could name. He’s a bit like Billy Joe Saunders, he’ll fight anyone you put in front of him without question.

It’s up to us to deliver a biggie for him – and we will. It is a pity that ‘Million Dollar’ Crolla doesn’t appear to want the half a million pounds on offer, but I am sure this is a unification fight that will come – providing Anthony Crolla keeps his own WBA title against Ismael Barroso, which is not a given.

I keep hearing it is a no-no because of boxing politics. Why should it be? I don’t have a problem with any of our boxers fighting for other promoters – Bradley Skeete has just won the British welterweight title on a Matchroom bill – so let’s get it on. It is a cracking showdown, a natural local match-up between two old school friends everyone wants to see, and not just Manchester.

I really can’t see the logic in Crolla fighting Barroso. It’s stupid because if he gets beaten by Barroso, that’s it. He ain’t going to come knocking on our door then asking for that £500,000 because it won’t be there

Flanagan will have other big fish to fight. Options for him include Jorge Linares, stripped of the WBC belt because he was unable to defend the title in April due to a broken hand, or the WBO’s No1 challenger, Jose Zepeda, from whom Flanagan won the belt in July last year, becoming the first Englishman to earn a world lightweight title.

Zepeda was forced to retire after two rounds in their first fight after dislocating his shoulder, so a return would be an attractive proposition.

Another intriguing possibility is that the British super-featherweight champion Liam Walsh is now calling out Flanagan, declaring: “For me Terry is one of the best, if not the best lightweight in the world. It’s an exciting fight and I’d get good props for taking him on. People would class me as an underdog which I’ve never been and I’d like to be.”

So the Turbo will keep charging on and hen he is at full throttle again I can’t see anyone out there stopping his momentum towards undisputed world supremacy.