It’s sock with schmaltz, but Creed is more credible than Rocky

Boxing’s latest celluloid offering, Creed, lands in British cinemas at the end of this week with all the dramatic impact of a Rocky right-hander. 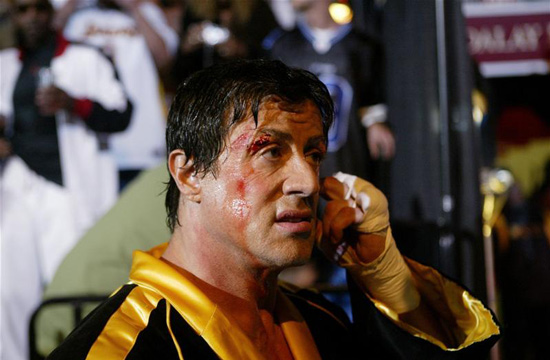 The question is whether it lives up to Rocky’s reputation and after watching a preview my answer is yes – it’s a winner by split decision.

So let’s get ready to mumble –again. Sylvester Stallone brings Rocky out of retirement, though thankfully at 69 he’s not back in his stars-and-stripes shorts but training the son of Apollo Creed, his first foe.

It isn’t Rocky V11 , but Creed 1 – and doubtless there will be more such is the sub-plot with the outstanding Michael Jordan starring as the young Adonis Creed and Stallone this time in what is essentially a supporting role as his reluctant, ailing mentor.

Though 2006’s Rocky Balboa, aka Rocky V1, seemed a fitting finale top the series Creed finds more of his story to explore.

The fight game has long provided the perfect punchlines for the big screen where the blood flows as as freely as the tears of the women at ringside who can’t bear to watch, and this latest pastiche of the sometimes ignoble art certainly doesn’t fail in this respect and occasionally it is intriguingly credible.

As in the Rockys, every exaggeratingly thrown punch is expertly choreographed and assiduously rehearsed, and like its forerunners it will ring bells at the box office.

Life for Rocky, a widower in declining health, has come full circle, and he finds himself essentially occupying the function of Burgess Meredith’s Mickey from the first three films, applying the Vaseline and words of wisdom from the corner.

As a trainer Angelo Dundee he isn’t, but as an actor Stallone gives one of his best, and thankfulty most verbally coherent performances.

There is a surprisingly good acting debut too for British boxer Tony Bellew who plays the defending world light-heavyweight champion ‘Pretty’ Ricky Conlan, a thuggish Liverpudlian loudmouth, with additional British interest as the inevitable showdown with Creed is staged at Goodison Park.

Some might say Bellew is almost type-cast but his plausible portrayal is impressive and there are also a cameo appearances by Andre Ward and Michael Buffer to top up the authenticity.

Actually, while it is largely true to the genre, in some ways Creed is more realistic than Rocky, notably in the gymnasium scenes.

But basically it remains the tried and trusted formula of pugilistic pathos laced with gore and melodrama plus the obligatory fighter’s squeeze, this time portrayed by the stunning Tessa Thompson.

Without giving too much away the heart-stopping conclusion leaves it open for Creed to return, and filmdom buzz is that it will be against an Ivan Drago fight-alike so he can try to avenge the ring death of his father.

Creed might not quite creep into the top ten list of boxing movies though it beats more recent offerings like Southpaw and Grudge Match but not true classics like Raging Bull or Cinderella Man, or my all-time favourite, The Harder They Fall.

However, sock with schmaltz it may be but by the end it is genuinely moving and well worth a ringside seat at your local picture house.

Putative US presidential candidate Donald Trump, an ardent fight fan regularly seen in the most expensive ringside seats at Las Vegas fistic extravaganas, says that had he not been successful as the emperor of entrepreneurs he would have liked to become a boxing promoter.

Just imagine him and fellow Don (King) as rival impresarios. Apart from the verbal jousting the thought of those two clashing coiffeurs is enough to make anyone’s hair stand on end.

Liverpool’s Derry Mathews has turned trainer – but with footballers, not fighters.

However those who play for Colwyn Bay, aka the Seagulls, are fighting to avoid relegation in the Evo-Stik Northern Premier League. 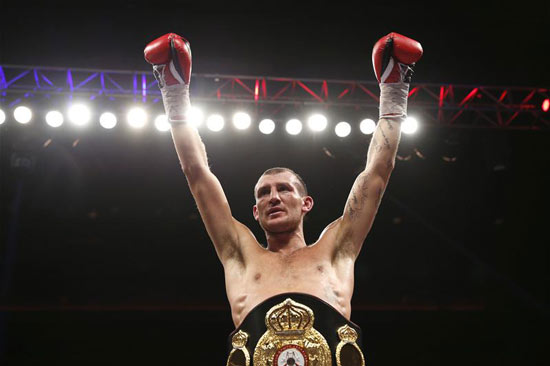 Which is why manager Kevin Lynch, a good friend of Mathews, packed his team off to work with him at Derry’s Liverpool gym. “He;s got a great personality about him to rally the troops and work the lads really hard,” he says.”They needed picking up and I can’t thank Derry enough.

“It’s been inspiring. It’s good to take players out of their comfort zone and putting new methods into their training.

Lynch and some of his squad now plan cheer on 32-year-old Matthews when he challenges Manchester’s WBO lightweight champion Terry Flanagan on February 13 at the Echo Arena.

“For what he’s been doing for us the least we can do is give him our support and we wish him all the best,” he says.

Farewell to a great boxer

We have just said a tearful goodbye to a wonderful boxer and loyal friend for just over ten years.

This one did not have two fists, but four legs and truly endearing personality.

Her name was TJ and in the best tradition of all boxers she fought with spirit and bravery right to the end.

We have always had boxers, the first a true champ named Ali after the great Muhammad.

TJ was our sixth, precious and beautiful, who we’ll miss beyond measure.

If I get the green light lets GO! One thing I am is a fighting man. I wouldn’t back down a fight from any man. 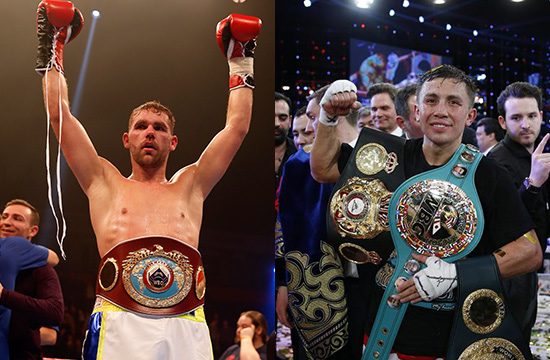 I realise now you can’t be a Jack-the-lad in the boxing business if you want to get to the top. I‘m determined to make amends and will not behave so stupidly again.

He has a spotty record, hasn’t done great ratings. Why would we feel he’d do well on pay-per-view?

American promoter Bob Arum pulls no punches as he tells why he rejected Amir Khan as an opponent for Manny Pacquiao.

It was nice being around Sly. He always gave me great words of advice. The best bit of advice he gave me was basically to visualise someone else’s face on Michael B Jordan’s (who plays Adonis Creed) body. So it was Nathan Cleverly’s face on Mike’s body.

Tony Bellew on how he got into character for role for the film Creed.

Anthony Joshua has some improving to do. He has to curb the idea that he can just walk through people with his power. At the highest level you just can’t do that. And while he continues to punch as if he were looking over a fence he will always invite trouble.

I was thinking that when I whup your ass I got a special song to sing to your wife, then dinner and a movie #cuddletime.

WBC heavyweight champ Deontay Wilder jokingly suggests he will do more than whisper tweet nothings to Fury’s missus should he and Tyson meet
Tomorrow: The Big Interview with Ahmet Patterson