The packed house inside the Leicester Arena – as well as those tuning in on BT Sport or BoxNation – are in for a genuine fistic treat when a little magician, who throws punches like he is waving a wand, hotfoots it into the ring on Saturday.

That is because the magnificent Zolani Tete is in town on business, with the objective of booking himself another world title shot.

Tete previously held an IBF world title at super flyweight, but surrendered his status due to promotional issues.

The 29-year-old is now one fight away from having another bash and his WBO final eliminator against Arthur Villanueva – 30-1 – features on our ‘City of Champions’ card this weekend.

For me, Tete is up there with the very best around and winning this fight will put him right back in the picture.

He is a joy to watch and even his ring entrances are captivating as he shuffles along with a beaming smile singing along to a South African soundtrack.

He couldn’t be more relaxed ahead of battle, but he is a fighting man with a real devil about him in combat. He is one of the nicest blokes you could meet outside the ring and deserves every success that comes his way.

We first encountered him in early 2015 when we brought him over to defend his world title against Paul Butler at the Echo Arena. I have to be honest here and concede that we had no idea just how good he is. 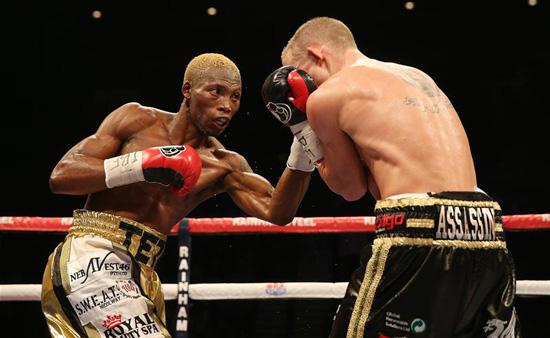 Had we have known, I imagine we would have steered Paul down an alternative world championship route. The then unbeaten Paul was stopped in the eighth and simply couldn’t find any answers to Tete’s brilliance.

The fact that Paul is one of – if not the – most naturally gifted boxers in this country shows just how good Tete is.

The pair, who have become firm friends, are both now operating in the bantamweight division so, in effect, we are launching a twin assault on the world title belts.

We are closing in on another world title shot for Paul, which we hope to soon have booked in for the summer.

The fact that there are two televised shows taking place this Saturday night is not ideal for the fans but, I am afraid, on occasions it is unavoidable.

I suspect the recorders on digital boxes will be working overtime and means of finding out fight results will be avoided by fans wanting a double helping of action.

I will naturally endorse watching our Leicester show unfold live because all the headline acts feature fighters who are on the up taking significant – and potentially hazardous – steps forward.

These boys have a big future in front of them and, unlike elsewhere, are not queuing up on the steps of the Last Chance Saloon.

Four championship belts and the booking of a shot at a world title are on the line in Leicester and it will be well worth a watch.